Great Britain’s men earned a 3-1 victory over South Africa to get their Olympic campaign off to the perfect start.

Great Britain were quick out of the blocks and earned two penalty corners in as many minutes. Ward ensured that early pressure would pay as his thumping drag flick couldn’t be stopped by the South African goalkeeper to record GB’s first goal of the Tokyo Olympics.

The team weren’t ahead for long as Matt Guise-Brown’s precise drag flick found the corner of the net to level the scores just one minute after GB had taken the lead.

In a breathless first quarter, Danny Kerry’s side were looking dangerous and had domination over the possession count, with the ball persistently being worked into the South Africa circle.

Penalty corners were looking a real strength for GB as the first half wore on. Another low attempt from Ward was this time halted by the diving ‘keeper before Liam Sanford’s deflection from Adam Dixon’s drive was well saved.

South Africa did grow into the game and looked threatening on the counter-attack with several aerials causing trouble amongst the GB defence, though the side couldn’t conjure another shot on goal in the first half.

Great Britain raced out for the second-half with renewed energy and retook the lead just two minutes after the restart. Liam Ansell found himself with time and space to unleash a drive on goal, and though he didn’t catch it truly on the reverse, the looping ball evaded the South Africa goalkeeper to put GB ahead.

The team just couldn’t be stopped and remained firmly in the ascendancy with the ‘keeper facing unrelenting pressure in the circle.

A lack of discipline was also costing South Africa as three yellow cards were shown their way, though they did create a significant chance as Ollie Payne was called into action to make a smart save with the boot to maintain GB’s lead.

The result never looked in doubt when Waller flashed the ball into the circle, where a defender’s touch inadvertently sent it into the backboard, to put GB 3-1 to the good with just five minutes remaining.

There was to be no further change to the score as Great Britain’s men got off to the perfect start to their Tokyo campaign and will head into their next match against Canada on Monday 26 July at 3:45am BST hoping to make it two wins from two.

After the match, Head Coach Danny Kerry commented: “It was a tricky first match to start the Olympics. South Africa set up to play counter-attacking hockey and sat deep for much of the game, so we had to work hard to break them down. We managed to create a lot of opportunities through the match, but we’ll go away and seek to improve in a number of areas. It’s always pleasing to start with a win, we’re off and running.” 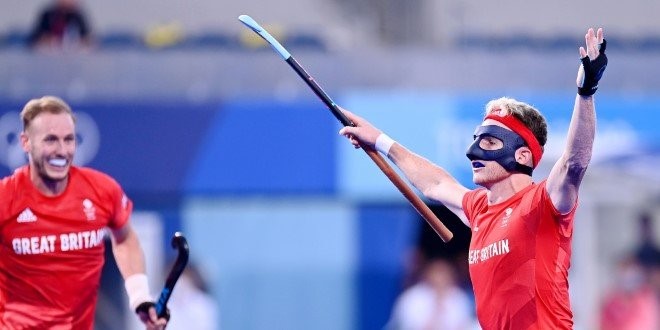