Today is the 120th anniversary of the first ever Scotland women’s international match, when they took to the pitch to play Ireland on 13 April 1901. Research carried out by The Hockey Museum; the Scottish Hockey Heritage Group; and the Irish Hockey Archive recently clarified the specific date of the match to allow us to celebrate the anniversary. For more information on the work of The Hockey Museum in the project, click HERE.

The Ireland women’s team challenged Scotland to the match, and the Scotland women’s team, as early hockey tourists, took to the field for the first time at Milltown, Dublin, and lost 2-0, a respectable score.

The Scottish team two days later defeated the hitherto unbeaten Leinster Ladies 2-1. These intrepid boat-travelling hockey tourists were truly pioneers in every sense of the word. Thus international hockey was launched, with fixtures against all of the Home Countries being played the following year.

The Scottish Women’s Hockey Association was formed in February 1900 at a meeting held in Edinburgh attended by eight women’s hockey clubs. The association quickly grew to eleven clubs and chose its first national team to take on Ireland, taking on the condition that the match be held in Dublin.

The first Scottish team was almost entirely made up of players from St Leonards School.

The Scots held their own against a clearly well practiced Irish side. Ireland began to press as the game went on, and prompted some good saves by Simson in goal for Scotland.

Scotland won two corners but couldn’t convert either of them, however the same couldn’t be said for Ireland who dispatched a corner to make it 1-0 at half time.

A late press by Ireland brought the second goal and a 2-0 win.

In the second contest when they faced Leinster days later, the Scotland team hit its stride and put in a fine performance. Scotland’s captain J. K. Stewart scored both goals in a 2-1 win for Scotland, ensuring a place in history as Scotland’s first ever captain and goal scorer.

In 1902 Scotland defeated Wales 4-0 at Wrexham and then played their first matches on home soil, drawing 0-0 with Ireland in Glasgow and being beaten by England 4-0 in Edinburgh.

The pattern of annual matches began, lasting until the early 1990s when England withdrew from these annual fixtures. 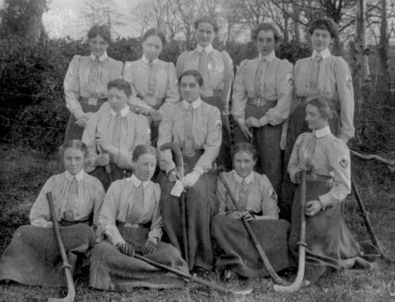