Canada edges win over Scotland in another exciting indoor match

Canada were the 6-5 victors at Bells Sports Centre but they were pushed all the way by Scotland in a close match to finish the three-match series. Scotland won 10-2 following a 5-5 draw the previous day in the international indoor hockey trilogy.

The first chance of the game went to Scotland after some lovely play by Stephen Dick found Cammy Golden arriving on goal, but he was denied by the pads of the goalkeeper.

Canada then sprung forward and opened the scoring when they unlocked the Scottish defence with a slick diagonal pass, before the ball was forced home by Tyler Branca to make it 1-0.

Scotland looked composed despite going behind and dominated the play. They almost equalised quickly when a lovely spin and pass found Andrew McConnell but his shot just evaded the far post.

Canada went 2-0 up early in the second quarter; again some slick cross court passing opened the Scots up and Lyle Fernandez provided the finish.

The response from Scotland was instant and an Adam MacKenzie drag flick found the top right corner to make it 2-1.

That same top corner was the target again when Dan Coultas nearly equalised but his backhand flick swung just wide of the mark.

The second half was as fiercely competitive as the first. Coultas nearly scored early doors after some more inventive play by Dick, but the keeper was out quick to block the effort.

There was a yellow card for Mackenzie and the Canadians went on the prowl. They then Jagpred Singh increased their advantage when he slammed the ball low against the backboard for 3-1.

Still a man down, Joe McConnell struck the outside of the post for Scotland from a tight angle after some lovely build-up down the right.

Right at the end of the third Canada scored again when a penalty corner took a couple of wicked deflections and crawled over the line for 4-1.

Scotland came out strong in the final quarter and Coultas was denied an early goal after the keeper dived at full length to save his shot low at the right post.

Gordon Amour then got a deserved goal for Scotland when Golden picked him out arriving at the far post for a well-worked tap-in. 4-2.

Another yellow card was shown to Scotland and Canada set out to capitalise. Fernandez struck again with a drag flick to make it 5-2 and seemingly put the game out of reach for Scotland. It went 6-2 soon after when the ball was forced over the line despite a valiant effort to keep it out.

The Scots wouldn’t go down without a fight however and Coultas struck one back when he slammed a powerful drag flick into the net for 6-3.

Scotland threw everything at the Canadian goal for the final few minutes and struck again through Dick, a low and hard strike against the backboard for 6-4.

Dick then scored again when he somehow managed to thread the ball through the goalkeeper’s legs from a tight angle. 6-5, and the comeback was on.

Despite the effort Canada held on for the win in another exciting indoor match at Bells. 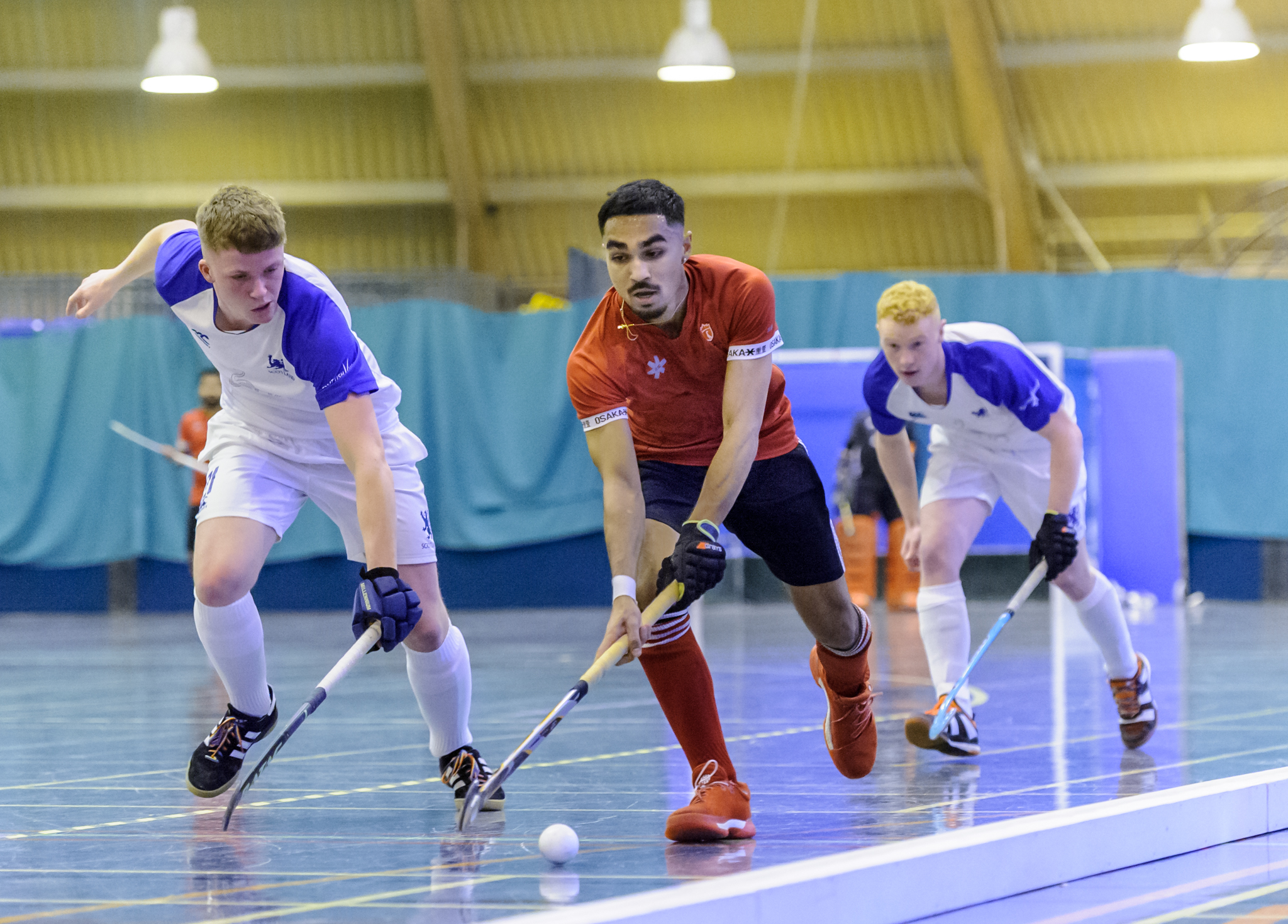