On Wednesday 6 November, 180 young hockey players from across the country met to compete in the Senior Aspire Schools Cup. The event, held at Glenalmond College in the glorious Perthshire countryside, was the first time a qualifying tournament had been held for this competition.

The Girls’ event, which included three teams from the Highlands, comprised two groups of three teams. In Pool A, Perth Schools finished top, beating McLaren HS from Callander 5-0 before a hard-fought 2-0 win v Dingwall Academy. Dingwall then drew 1-1 with McLaren in an excellent match to finish runners-up.

In Pool B, an impressive Renfrewshire Council team recorded two 7-0 wins over Kingussie High School and Millburn Academy. The two Highland teams then shared a 0-0 draw, which meant penalty flicks to decide who would finish 2nd in the group.  In a dramatic shoot-out, Kingussie won 2-1 after ten penalties, with their goalie taking two flicks as well as saving four!

And so to the play-offs, where Perth beat Renfrewshire (both pictured) 2-1 to finish top. Kingussie edged Dingwall 1-0 to take 3rd place, and McLaren were too strong for a plucky Millburn team in a 9-0 win. That rounded off a superb morning’s hockey, played in a very friendly spirit.

The boys’ event in the afternoon had seven very evenly-matched teams; three in Pool A and four in Pool B.

In a very tight Pool A, Harris Academy beat McLaren HS 2-0 and High School of Glasgow 1-0 to finish top. McLaren drew 0-0 with HSoG to be runners-up, thanks to some great goalkeeping at both ends.

The play-offs gave us some of the best games of the day, with Grove winning 2-1 in the Dundee derby v Harris. A strong Perth team finished third after a 3-1 win v HSoG. There were two play-offs for the other teams, with Renfrew 2-0 up against McLaren, who also drew 1-1 with Merchiston. 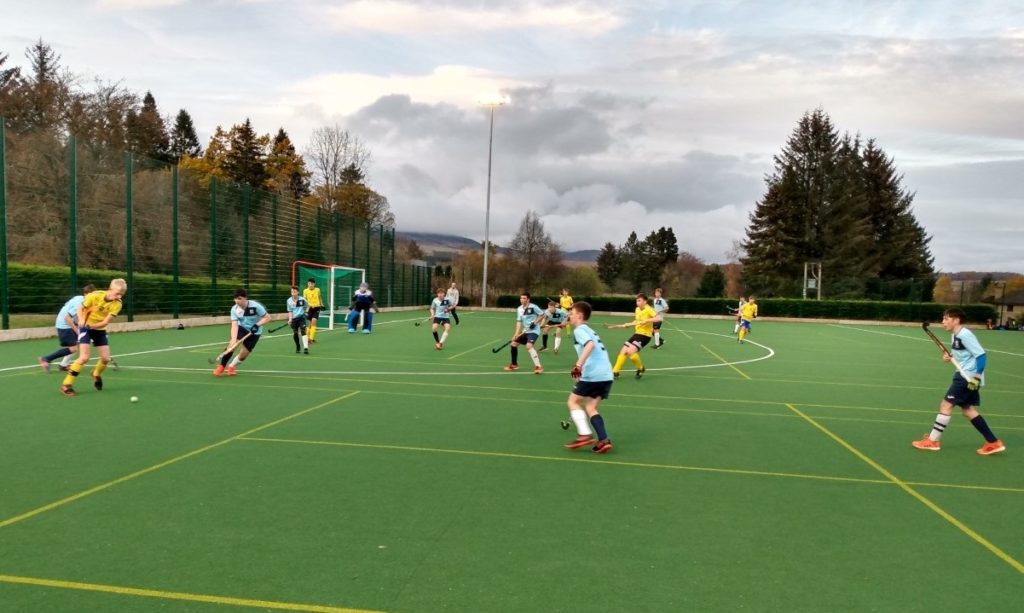 The draws for the semi-finals are:

The winners will meet in the Aspire Cup Final on 13 March at Glasgow Green.  All other teams will aim to have play-offs to decide the other places for this season’s competition.

It was inspiring to see so many young players who don’t get many school matches enjoying this tournament. The Aspire Cup is for schools who are in the early years of their hockey programme or are unable to field their own team in the Schools Cup, so combine with others to enter.

A huge thank you to everyone who came along, and to Rachael Cave from Glenalmond for being such a great host on a cold day, providing coaches, umpires and officials with tea and biscuits!