Scotland’s women lost 2-0 to Australia in their final pool match at the 2022 Commonwealth Games. An incredibly brave, disciplined performance at the University of Birmingham Hockey and Squash Centre just wasn’t enough to beat the third best team in the world.

The Hockeyroos’ slick passing created two early chances, but ‘keeper Amy Gibson was alert to clear the danger. The Scots were struggling to get the ball through the high Australian press under intense pressure but worked really hard to deny their opponents clear-cut chances.

The second quarter had a similar pattern, but heroic defending from Amy Costello, Ellie Wilson and Becky Ward kept the Aussies at bay. Nikki Cochrane, who replaced Gibson at the break, made a good save before the Hockeyroos won the first penalty corner of the match on a video referral three minutes before half-time.

The shot was goal-bound but Costello made a brilliant stop on the line. However, the ball was in the net seconds later when Grace Stewart spun and slotted the ball into the corner. It was tough on the Scots who had defended so bravely all half.

The Hockeyroos started the second half on the attack and created early chances with slick passing. When the Scots did break they looked dangerous, with Katie Robertson and Heather McEwan making good runs up the flanks, but they struggled to pick the final pass.

The Scots continued to work incredibly hard to deny their talented opponents clear opportunities, but Gibson made a brilliant reflex save when they did find a way through. Scotland were struggling to deal with the physicality and speed of their opponents, but stuck to their task.

The final quarter began with the Scots taking the game to their opponents. However, this left space at the back and on 47 minutes a superb passing move by Australia ended with Shanea Tonkin scoring to make it 2-0.

The Hockeyroos won a penalty corner on 50 minutes, saved by Gibson, and then Ward made a superb block. The Scots continued to give it everything, and Jamieson’s ball into the D narrowly failed to pick out a teammate’s stick.

In the final attack of the match, the Hockeyroos won their third penalty corner of the match but once again Gibson made a great save. The game finished 2-0 to Australia.

The Tartan Hearts should be very proud of their efforts against the Hockeyroos, who finish top of the pool in their quest to win their fifth Commonwealth Games gold medal. Ultimately, the Scots unlucky 1-0 loss to New Zealand cost them a semi-final place, and they will now need to wait and see who they will meet in the play-offs. 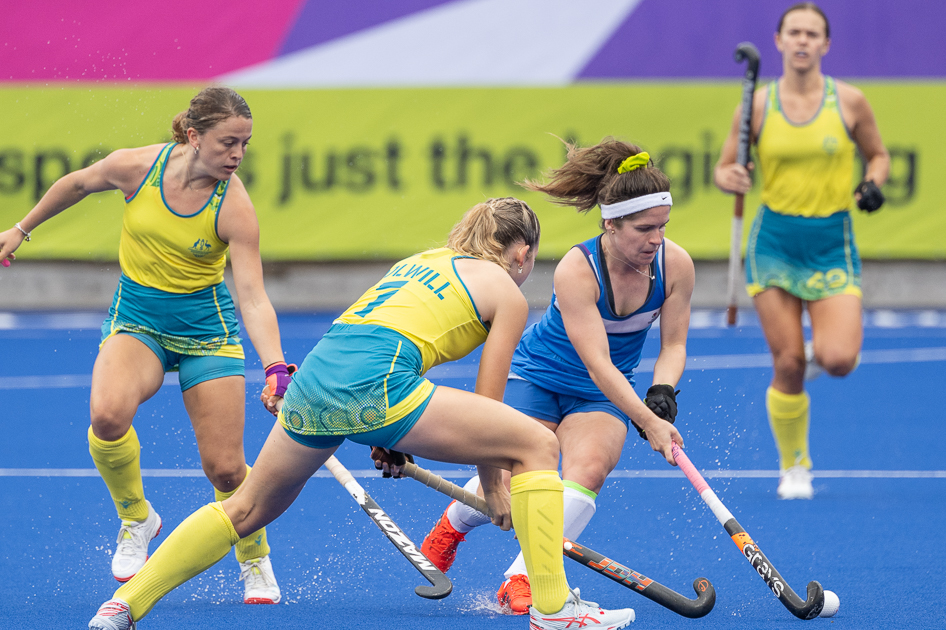