The District Festivals at the weekend brought down the curtain on a hugely enjoyable youth hockey season.  And what a celebration we had in the Peffermill sunshine!

You can find all the results here: District Festivals_Results.

The Emerging Girls, mainly under-15’s, started us off on Saturday with a thrilling competition.  The eight teams, featuring players from our District Development programmes, entertained the big crowd with some scintillating hockey.

East District entered two squads, both of which won their respective pools. The coaches had clearly done a great job in selecting two evenly-matched teams as they were tied 1-1 at full time in the final.

Amy Hannay thought she’d won it for East Purple with four minutes left, only for Isla Youngs to equalise from a penalty corner in overtime. In the resulting running penalties, Izzy Poots and Amy Edgar scored to give East Sky a 2-0 win. All the goalkeepers were outstanding, with Isla McCormack pulling off the crucial winning save.

In the third-place play-off, North had a superb 2-1 win against South after both had been runners-up in their pools. Abbie Little had put the Borderers ahead before Abbie Shaw and Hannah Mair won it for Richard Freeland’s talented North team.

Both West District teams battled it out for fifth place, and it was the same story as the final.  Orla Miller put the Panthers ahead late in the game, only for captain Alexandra Burdon to equalise for the Lions a minute later. Molly Mitchell’s Lions won the bragging rights with a 2-0 win on penalties. Again, the goalies were superb but Lily Blair and Maia Macaloney found the net for the Lions.  West Lions’ goalie, Fallon Thomson only conceded three goals all day.

Highland enjoyed their trip back to Inverness with an excellent 2-0 win against South-West to clinch seventh spot. Emily Laws and Grace Mackay were the scorers.

We were back at Peffermill on Sunday for the Emerging Boys, and it was another cracking tournament. The four teams all played each other before a final and 3rd/4th play-off.

Highland started superbly, banging in four goals without reply against East.  They followed this up with 1-0 wins against Midland and South to top the group with maximum points and no goals conceded. Andrew McCutcheon and Alex Nevard scored the all-important winning goals.

East were runners-up in the group after a crucial 2-1 win v Midland. Charlie Ho put East ahead before Tim Hadland equalised, but Finlay Cohen smashed home the winner seven minutes from time.  East had earlier drawn 1-1 with South, for whom Andrew Gibson scored.  Midland’s Angus Nichol scored the only goal to beat South and earn third place in the pool.

The final was a superb advert for youth hockey. Ori Stilman and Logan Forbes put Highland 2-0 ahead before Jacob Jolly got one back for East on half-time. Alex Ainsworth made it 3-1 but Oliver Bennet’s late goal made it an exciting finish.  Congratulations to Highland on winning their first ever District trophy.  And a huge thank you to Jill Croll, East Boys Convenor, for finding a few boys to give Highland a big enough squad to compete in the event.

Midland rounded things off with a 4-0 win v South. Jack Tasker, Matthew L’Anson, Rowan Speed and Oliver Cooper sent the boys back to Tayside with a third-place finish.

The Aspiring Girls’ competition, which ran alongside the Emerging Boys’ event, proved equally exciting. The girls, most of whom are under 17, played in a five-team round-robin event.

South District started with a 2-0 win v East Purple, and produced consistently strong performances all day, with further wins against West (2-0) and South-West (4-0). That left them needing a draw in their last match v East Sky to win the title, and they delivered in style with a 2-0 win. Naesi De Zoeten scored both goals, bringing her total to four for the day. Katie McDonald scored three, including a double against West. Captain, Jessica Main collected the winners’ trophy.

East Purple were runners-up with nine points. After the early loss to South, they beat South-West and West, with Lauren King and Molly Kelly scoring in both games. And they finished on a high, winning the East derby 2-0 thanks to goals from Beth Macrae and Lauren Kerr.

East’s other team, Sky, were third thanks to wins over West (3-0) and South-West (4-1). Maddie Lumsden (2) and Lexy Turner hit the target against West, and a superb hattrick from Isla Stewart and one from Lucy Keir did the damage against South-West, for whom Anna Thomson scored.

West finished fourth on goal difference ahead of South-West after they played out a goal-less draw. Amy Li had earlier scored West’s only goal of the day against East Purple.

Thank you to everyone who contributed so much to making the weekend such a success.  The District Convenors, coaches, managers and players should be proud of their efforts. Duncan Service from East District organised a group of development umpires for the weekend, and they all did an excellent job. As always, the efficient, hard work done by our technical officials made everything run incredibly smoothly.  And our colleagues at Peffermill have been absolutely fantastic to work with this season.

It was a great team effort to provide a fitting climax to a very busy but thoroughly enjoyable youth hockey season. 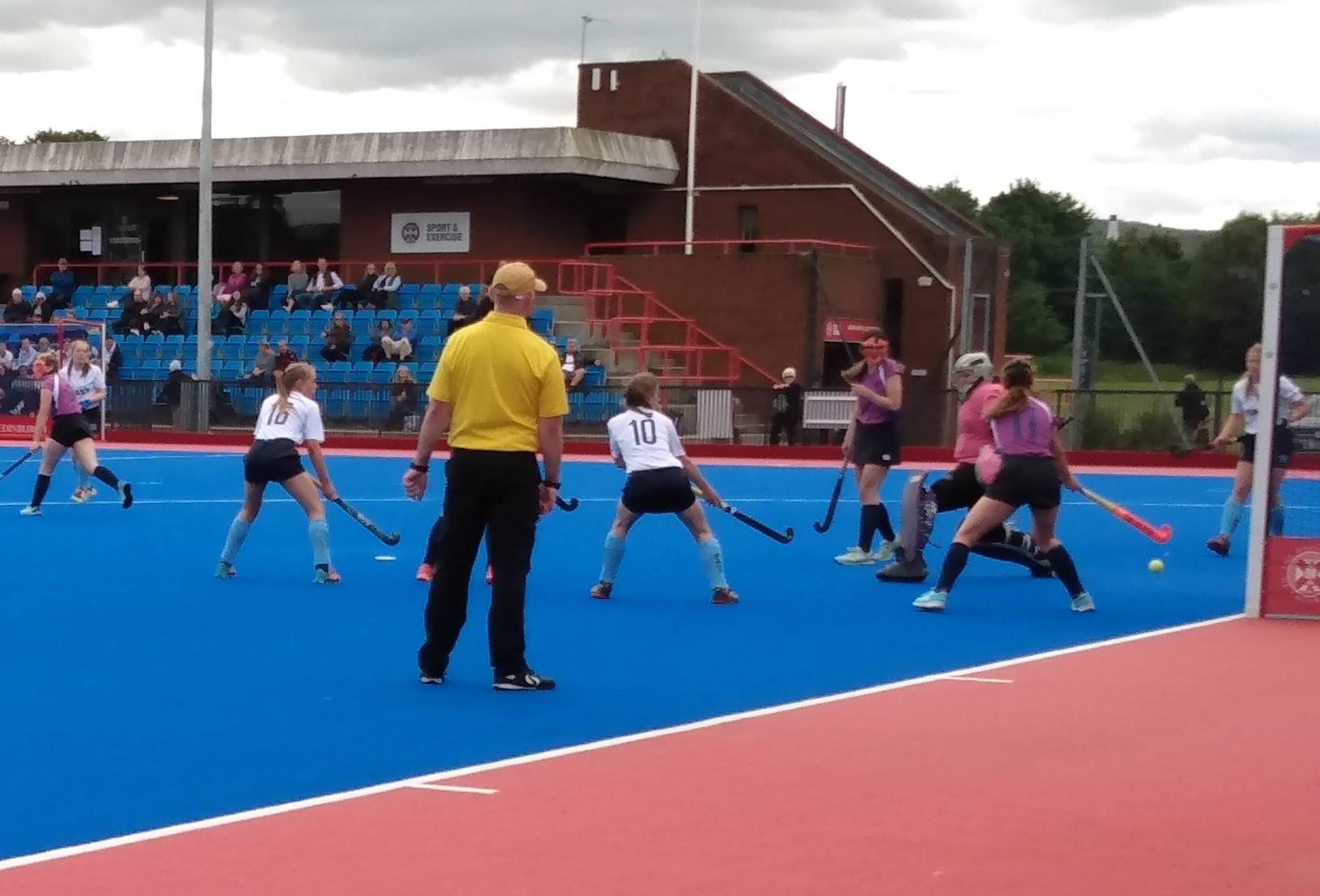