Scotland`s youngsters are on the brink of losing their status at the EuroHockey Junior Championships following today`s results in Ghent.

The women surprisingly lost to Wales in their relegation pool while the men drew with Austria. But it is still all to play for tomorrow.

Wales had a poor record in their pool competition losing 27 goals in total, but in today’s relegation group encounter the Scots failed to find the net at all, going down 1-0.

The Scots youngsters slipped to the bottom of the table with only a single point and relegation is a very real possibility. Survival would depend on a comfortable win over Spain tomorrow and a friendly result between Ireland and Wales – possible, but very unlikely.

Head coach Neil Menzies summed up the occasion. “We started well enough and were patient and Wales defended well, and then they scored. We were much better in the second half but never really looked much like scoring despite having four penalty corners. We were a little flat and didn`t create any real clear-cut chances.”

Wales opened the scoring in 24 minutes through an open play strike by Bethan Collier – which proved to be the winner.

The Scots did have four penalty corners, two were saved by the keeper, one went wide and the other was run down. Two sin bin visits by Ruth Blaikie and Georgia Jones in the fourth quarter did not help the Scots cause for an equaliser.

Scotland`s draw with Austria in the second relegation pool match was perhaps not ideal, but at least it kept Graham Moodie`s charges in the survival hunt.

The opening quarter was goalless, but the Austrians took the lead through a penalty corner conversion by Marcin Nyckowiak.

That scoreline remained until the 40th minute when Scotland were awarded a penalty corner and Iain McFadden scored with a powerful low drag flick.

It could have gone either way at the end. Austria had an overtime penalty corner which could have been a disaster but for a brilliant goal line save by Andrew McAllister – so it ended 1-1.

Head coach Graham Moodie said: “A draw was not ideal, a win would have been better, but we will stay up if we beat France by two goals tomorrow. We gave away a cheap goal to Austria which made life difficult but fought back well and were challenging for the winner at the end.” 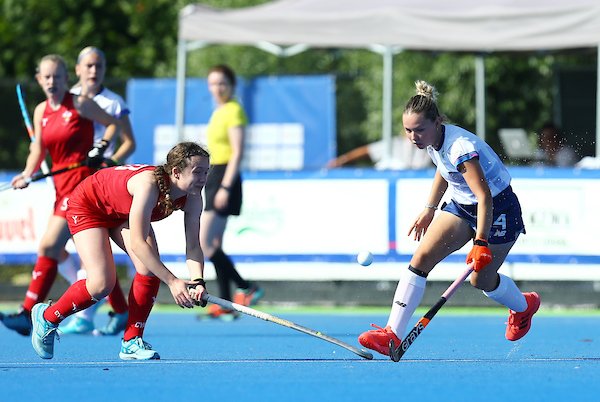