Scotland’s under-21 teams were already under pressure to stave off the threat of relegation from Europe’s top table but today’s double defeats made that inevitable, and so it will be the second tier in two years’ time.

The Scots youngsters needed a win on the final day to have a chance of staying in Europe`s elite, but instead went down 6-1 to a talented Spanish side.

Head coach Neil Menzies said: “I thought we played with much more intensity and energy today but mistakes by a number of players led to several goals for the Spanish. At 3-1 down we were chasing the game, there was no point in sitting back as we needed to win and that gave the Spanish several scoring opportunities.”

It took Spain five minutes to get their noses in front, Maria Torrent went on a mazy run and finished the move with a shot that beat Jess Buchanan in the Scotland goal.

Lucy Williamson was not in the starting line-up but came on after seven minutes, and quickly embarked on a solo run that took her past two defenders into the circle, she then side-stepped the Spanish keeper and slammed the ball into the empty net – a piece of brilliance!!

Parity did not last long and just before the end of the first quarter Torrent was allowed to waltz into the Scottish circle and was left with a free shot at goal for a 2-1 lead.

Most of the second quarter was played out in midfield until the Spanish were awarded a penalty corner and a well-worked routine saw Blanca Perez slide the ball past Amy Salmon on the line. It was 3-1 at half-time.

The highlight of the third quarter was a good interception by Georgia Jones who then went on a solo run for half the pitch but finally lost control of the ball in the Spanish circle – the move deserved better.

At times the Scottish defence lived dangerously with Jess Buchanan by far the busier keeper.

The Scots started the final quarter brightly, they had their first penalty corner and Itske Hooftman also had a shot at goal, but gaps started to open up at the back as the Scots pressed to get back into the contest.

The Spanish took advantage and Ainhoa Ballesteros made it 4-1 with a reverse stick shot. Meritxell Vizcaino scored a fifth with a powerful flick at a penalty corner. But for a spectacular one-handed save by Amber Murray it might have been six – she came on as a substitute for Jess Buchanan for the final quarter.

At the other end Hooftman had another shot at the Spanish goal but it was blocked by a defender.

But the sixth goal came in the final minutes through a penalty corner strike by Clara Barba to complete the scoring.

In a final sum-up Neil Menzies concluded: “We lost our chance of staying up when we drew with Ireland in a game we should have won. A win here would have given the whole tournament a different picture – we lost the tournament early on.”

Scotland`s men had a clear objective against France in their final match in Ghent, beat France by two clear goals and survival in Europe`s top flight was assured.

However, the plan backfired and the Scots went down 5-1 instead.

The plan was barely given a chance when the French took a two goal lead in the opening three minutes through Corentin Sellier and Jules Verrier at a penalty corner. Now the Scots needed to score four.

However, even that new target failed to last the second quarter, Verrier scored another set piece for the French to advance the score to 3-0.

Then came a whiff of a comeback with a penalty corner goal from Edinburgh University`s Keir Robb to reduce the deficit to 3-1. But before the end of the half the whiff had dissipated with a fourth from Jules Bournac from a set piece.

The scoring dried up for most of the second half as the Scots youngsters failed to make inroads into France`s three goal advantage.

However the Scots did have their chances with three open play opportunities and a penalty corner – but no reward.

And late in the final quarter the French scored again with another penalty corner strike from Verrier for his hat-trick.
Scotland were again without defender Jamie Croll who sustained a hamstring injury against Spain.

Head coach Graham Moodie said: “The squad worked so hard and that is to their credit, but we’re not quite at that level yet.

“The players have learnt a lot over the tournament but we need to play more at that level.

“Today we had a lot of chances not taken and we were punished for our mistakes.” 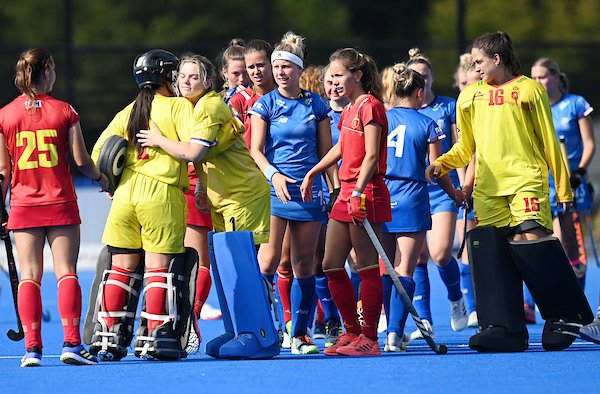