Scotland U19 boys drew 2-2 with England and snatched the bonus point with a penalties win in day two of the GB&I 4-Nations at Peffermill, while Scotland U19 girls were narrowly defeated 1-0 by England.

It took a thrilling penalty shootout but Scotland U19 boys took the win against England in the GB&I 4-Nations at Peffermill.

Scotland got off to a lightning start and almost took an early lead, first through Alex Wilson who smashed the post on the reverse, and then Sam Knight who forced the ball under the England keeper, but not over the line.

The Scots soon struck and it was Sam Knight who gave Scotland the lead with a low shot off the left post and in. 1-0.

Early in the second quarter Scotland went 2-0 up through a tremendous finish by Charlie Jack. From a penalty corner rebound Jack slammed the ball high into the net to further Scotland’s lead.

A short time later a Wilson drag flight was well saved at another penalty corner routine as Scotland went searching for a third.

England kept working hard and almost pulled one back but for an excellent save by Charlie Gates in goal for Scotland. Gates was called into action shortly after with another save from a low penalty corner strike.

Then England pulled one back through Luis Cuttle’s tremendous finish into the top right corner from a penalty corner routine.

A bright start to the second half saw the game tear from end-to-end with both sides sensing the next goal would be vital. Before long the traffic was all heading towards the Scotland goal as England could sense an equaliser.

Then that equaliser arrived. Archie Vaughan slammed a low penalty corner strike against the backboard to make it 2-2.

It looked as if England would take the lead early in the final quarter but a sensational goal line clearance kept the ball from hitting the net.

Scotland battled back and the final few minutes could have seen the contest go either way. It so nearly went England’s way when they hit the post in the final moments, but the contest went to penalties as the heavens opened.

England stepped up first and a slip saw Vaughan miss the target. Alastair Douglas was up first for Scotland but saw his effort saved.

Then Ollie Drummond sent his effort wide of the post for England before Alex Wilson hit the net for Scotland when he slid the ball low under the keeper.

Josh Tikare scored for England when he rounded the keeper before Adam McKenzie missed for Scotland when he scooped it over bar.

Scotland U19 girls only just fell short despite a good performance in their second match against England in the GB&I 4-Nations at Peffermill.

Scotland started the game playing a high press and with an intensity that pushed England onto the back foot.

When Ava Smith showed some great skill on the half way line it got the crowd on their feet, and signalled Scotland’s intent in this contest.

Then an England counter attack saw Eloise Richards score for the visitors against the run of play. A lovely quick counter down the left found Richards in a great position to slot the ball past Cara McAllister in the Scotland goal to make it 1-0.

Scottish heads didn’t go down after the goal and Ava Smith launched Scotland into another attack down the left and sent a lovely through pass for Lucy Smith, but the attack fizzled out and England survived.

The work rate from both sides continued into the second quarter and England were first to threaten from a penalty corner opportunity, but Jess Buchanan was equal to the straight hit from the top of the D.

As the half neared its conclusion England got a foothold in the game and began the hunt for a second goal, and again Buchanan was called into action to prevent a second goal for the English.

Scotland’s intensity continued into the second half and Itske Hooftman very nearly struck an early equaliser early doors but was denied by a good diving save.

Lucy Smith was next to fashion a chance for Scotland after winning the ball outside the England D, but the danger was snuffed out by the recovering England defence.

As the final quarter got underway a sensational save by Jess Buchanan denied England a second goal. The keeper was out quick to block two versus one opportunity and keep the Scots within touching distance.

Scotland kept plugging away as the minutes ticked away but couldn’t find the key goal to take the match to running penalties. 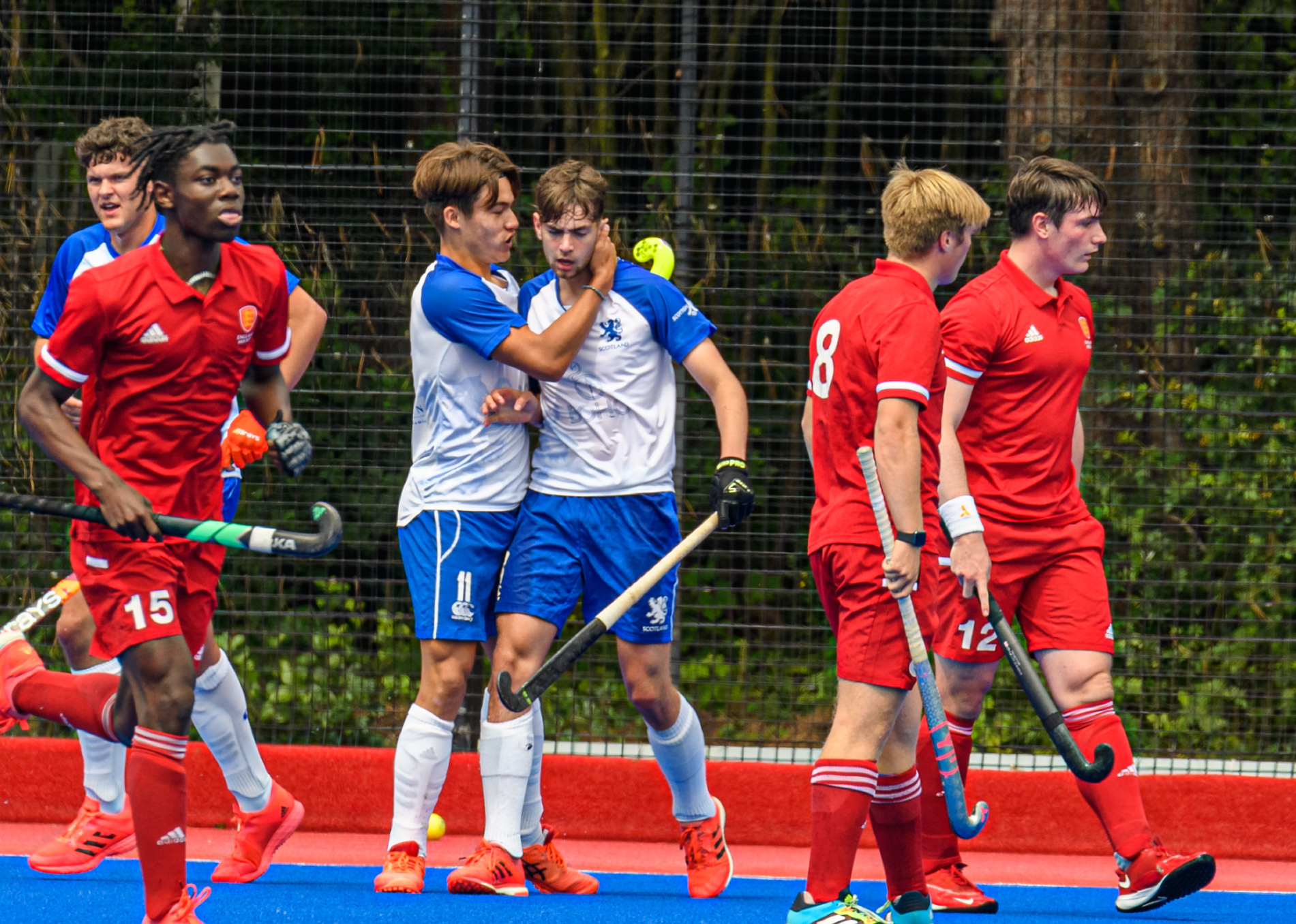