The results mean Scotland U16 Boys’ and Girls’ win their series’ after two matches, while Scotland U18 Girls’ can win their series with at least a draw tomorrow. Scotland U21 Women need a win to level the series in Glasgow, and it’s winner takes all in the U18 boys’ final match.

Scotland U16 Boys put in an impressive performance as they won the second game of three 4-0 against Wales in Cardiff. The win means the Scots have won the series with one game to play and are looking in great form as the new group of players begin to gel.

The Scots came out the traps and very quickly scored two goals to get off to a lightning start. The first came from an excellent Charlie Jack drag flick into the bottom right corner, then inside six minutes Joel Davenport made it 2-0 when he instinctively latched onto a rebound to convert.

In the second quarter it went to 3-0 when Peter Caughey deflected a penalty corner into the bottom left corner.

Scotland was in control of the contest with Davenport and Jamie Croll putting in outstanding performances. The Captain, David Macrae, also looked the part is he led his side in a dominant display of hockey.

There were some outstanding saves by the Welsh goalkeeper as Scotland created a number of chances to score again but were denied by a fantastic goalkeeping performance.

Scotland’s fourth goal was the pick of the bunch and it was Macrae who took the ball forward, beat three players on the baseline, and flicked the ball over the goalkeeper and into the net for 4-0.

With seven new caps on the pitch it was another fine performance for Scotland, and an excellent win with one more game to go in the series.

Scotland U16 Girls won the series against Wales with a 2-1 victory in the second of three matches in Cardiff.

It was a brilliant start by Scotland as they played an exciting brand of hockey with lots of lovely open play. The team was rewarded by a goal when they struck through a slick move that saw the ball zip from high on the right for Molly Morris to score on the left. 1-0.

After the goal Scotland sucked up a lot of Welsh pressure and defended well to hold onto their lead at half time.

Some high Welsh pressure after the restart brought their equaliser with the ball forced over the line in a scrappy battle in the Scots D.

The Scottish response was swift and 30 seconds later they were back in front. A three-pass move saw Scotland open Wales up for a Niamh Green back-post tap-in to make it 2-1.

Ava Smith had an excellent game for Scotland, particularly in the second half, while Olivia Henderson and Georgie Yuille were calm throughout and exchanged the ball well at the back.

Wales finished the game strong but Scotland showed good focus and discipline to defend six penalty corners and hold on for the victory.

After an incredible 5-5 draw in the previous match Scotland U18 Girls put in a composed performance to win the second test of three 2-1 against Wales.

Goals from Lucy Smith and Ellie Stott for Scotland came in a game were Scotland enjoyed lots of possession and controlled the tempo of play.

The opening goal came early, and it was Smith who struck after the Scots won the ball in midfield, broke on a counter attack, for Smith to score a rebound off the goalkeeper. 1-0.

There was more intensity about Scotland’s play from the first whistle, and although Wales changed their shape the Scots did well to solve the puzzle presented to them.

After a good interchange between three players Ellie Stott dove in and struck the post to issue a warning as Scotland moved the ball well.

Stott wouldn’t be denied and in the third quarter she bagged her well-earned goal after Ellie McKenzie carried the ball from midfield, beat three players and played a neat pass to Stott, who controlled well and sent a delightful reverse strike into the net for 2-0.

By the time Wales pulled one back Scotland had had three shots cleared off the line and been denied by some top goalkeeping. Then with six minutes to play a good finish saw Wales pull the score back to 2-1.

Wales piled on the pressure as they searched for an equaliser but Scotland was able to see the game out to take the win with one game left to play.

The second match between Scotland and Wales U18 Boys’ ended in another 2-2 draw setting up a winner takes all clash for the series tomorrow.

It was Wales who took an early lead when they were awarded, and converted, and penalty flick to go 1-0 ahead.

Despite going behind the Scots edged the play. Throughout the match Scotland created a number of chances to score but couldn’t convert.

It was the final quarter that was action packed. Wales doubled their advantage at the start of the fourth to go 2-0 in front. Scotland didn’t panic, in fact they showed great resilience and composure to continue with the standard of play they had set.

Eventually Scotland made one of their penalty corners count and it was Robbie Croll who slapped the ball home at the near post.

Before they knew it, the score was level. This time Fraser Moran converted a lovely drag flick to equalise and put Scotland on a final charge for a winning goal.

The winning goal didn’t come, although it very nearly did when Jacob Tweedie hit the bar in the final moments.

Things are clearly starting to click for this new Scotland U18 Boys’ team, tomorrow’s final game of the series is set to be a cracker.

At the Glasgow National Hockey Centre Scotland`s under-21 women squad drew 1-1 with Wales in the second of three test matches. It follows a narrow Welsh victory in the previous match in a very tight and competitive three-match series in Glasgow.

It was a completely different game from the previous meeting with a very tentative first half. The only real opportunity came from a Jika Nyirenda run forward from midfield; she beat two players and if the final pass had come off Scotland would have had two players running at the goalkeeper. Nyirenda had an excellent game and the Beeston player was involved in much of Scotland’s good play.

Scotland edged the second half play but Wales were always a threat.

The match was goalless for most of the contest until Georgia Jones put the home side ahead when she popped a rebound from a drag flick at the right post of the goal for 1-0.

With five minutes left to play Caro Hulme levelled for the Welsh as a result of a spin and shot from the top of the D. 1-1.
In the end a draw was a fair result and the Scots need to win tomorrow`s game to square the series.

The curtain falls on the Scottish Hockey domestic season at one of the highlights of Scotland’s sporting calendar – the Scottish Cup Finals!

Final tickets on sale now! Use these ticket links in the pages below to donate 50% of the ticket value to your club 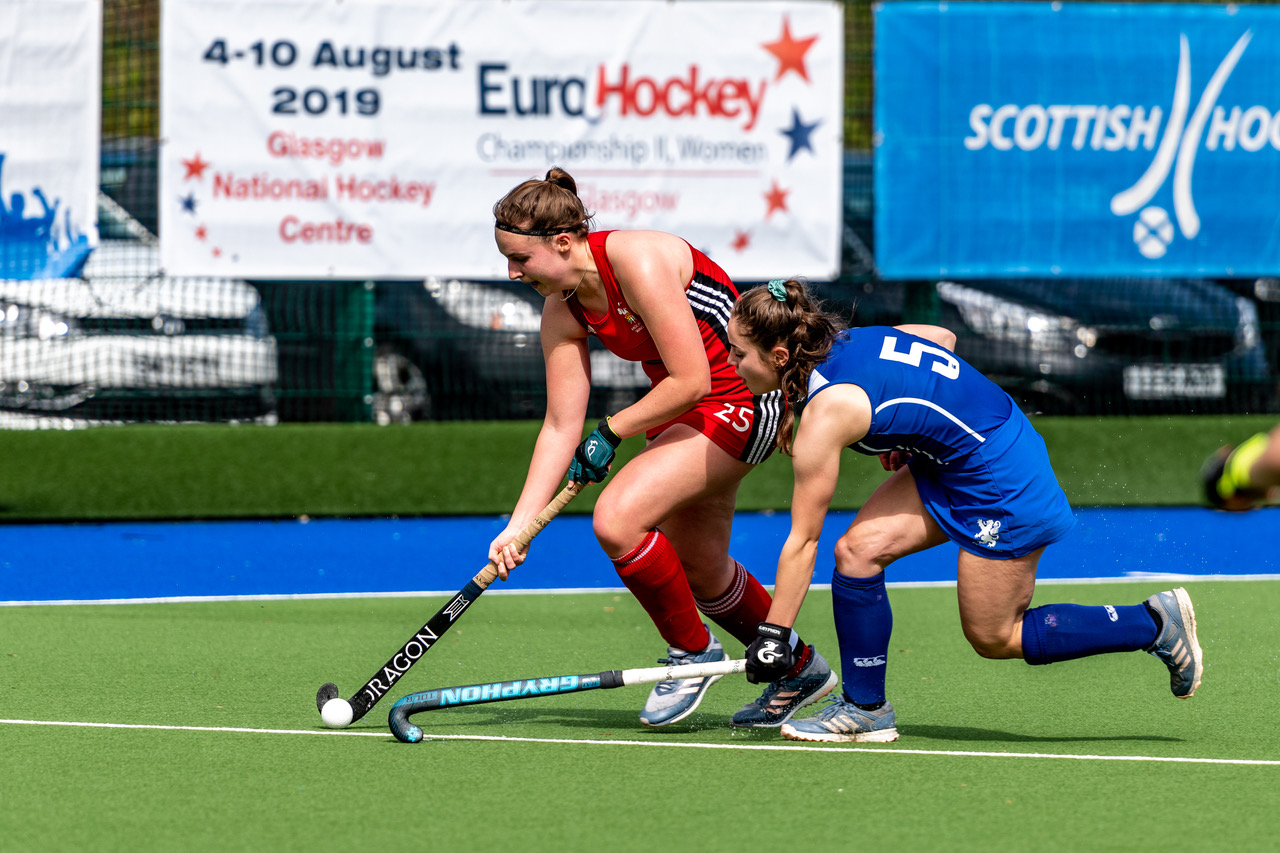