At a very special ceremony at Cottrell Park Golf Club, Cardiff, the surviving members of the very first women’s GB Squad to be selected in 1965, were presented with their GB Honours Caps by the current GB Hockey President, Sheila Morrow. Six members of this trailblazing team, Helen O’Boyle (nee O’Neill) (Ireland), Eirianwen Thomas and Janet Hopkins (nee Morgan) (both Wales), Janice Lang (nee Mitchell) and Valerie Crombie (nee Sinclair) (both Scotland) and Ellen Jenkins (nee Toulson) (England) came together again for the first time in 56 years. Listening to them sharing great memories of the tour to the USA, their other stories and the laughter, it seemed like it had only happened yesterday. These former players were joined by the relatives of Jennifer Braham (England) and Mary Hyland (Wales) who are sadly no longer with us.

Scottish players featured large in this event back in 1965. Not only former Scottish international players Valerie Crombie (nee Sinclair) and Janice Lang (nee Mitchell) but the 1965 tour party itself was captained by former Scottish Captain, Joyce Hunter.  She sadly died in 2011 with no relatives but The Hockey Museum has been in touch with her former school, The High School of Dundee, who already have some of her hockey memorabilia on display, and they are now arranging a special event to present the school with Joyce’s GB Cap.  Helen Weir, the GK on tour, is also no longer with us but The Hockey Museum is in touch with her relatives and will be presenting them with her GB cap in the coming months.

When The Hockey Museum started the work to compile a complete and accurate record of every GB match and the players who played in them, the commonly held view was that the first GB women’s team was selected in 1978 ahead of the entry of women’s hockey into the Olympic Games in 1980. The discovery of a 1965 GB & Ireland Touring Team (GB&ITT) blazer in the Dublin City Library Archives that had been donated by Joan Horne, changed all this.

Further research confirmed the existence of a GB tour to the USA and the names of all the players – but was this an official tour and could the two matches played against the USA team be counted as capped games? After much research by the museum’s volunteer sleuths and contact with many of the squad members and hockey colleagues in the USA, the Hockey Museum was able to confirm that the team was selected by an official GB committee and it played against the USA in two matches that the United States Field Hockey Association (USFHA) considered as full international matches.

The members and relatives of the first GB women’s team had come together from all over the UK. There were emotional reunions as they met in the bar to begin the reminiscing, carrying on during lunch which was then followed by the GB honours cap presentation ceremony itself. At the end, the tourists were serenaded by all the Welsh players who, led by Janet Morgan (now Mrs Hopkins) on the ukulele, gave a special rendition of “This land is your land” which had been the tour song back in 1965.

If you wish to find out more, follow these links

The Story of the First GB Women’s Matches 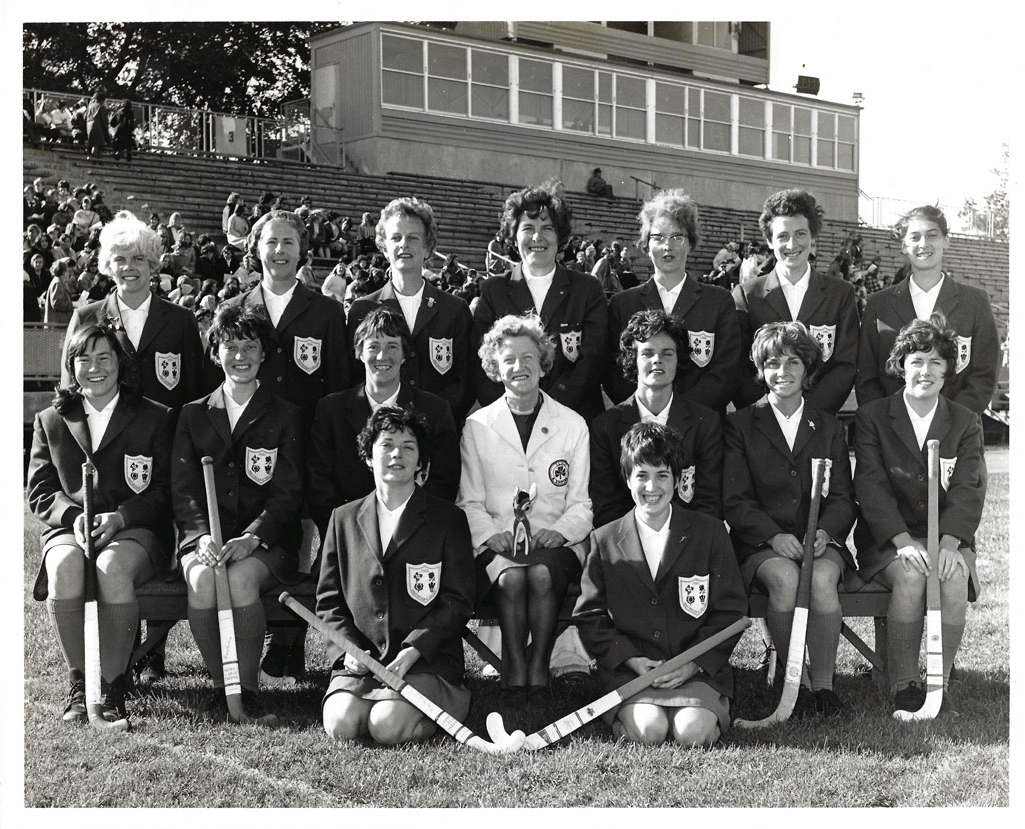