The game got off to a flying start with an early goal from Clydesdale Western; a powerful low finish by Margery Justice made it 1-0.

It was an opening quarter played at an intense tempo with both sides working hard to open the other’s defence.

It went to 2-0 at the end of the first quarter approached. Holly Steiger struck with a nice deflected finish in front of the goalkeeper to put Clydesdale Western at a two-goal advantage.

Into the second quarter and the high tempo continued. Wanderers struck back as a lightning strike into the bottom left corner by Vikki Bunce pulled it back to 2-1.

Another powerful strike across the goalkeeper Amy Snell made it 2-2 as Wanderers turned the screw before half time.

Millie Steiger came into the contest as the game continued and played some scintillating hockey for Clydesdale Western, but the scores remained even at half time.

An explosive Wanderers attack down the left opened Clydesdale up but an excellent diving save denied what looked a certain goal.

Wanderers were awarded a penalty stroke and Emily Dark stepped up to strike it, the effort fizzing wide of the left post.

Clydesdale Western were next to have a pop at goal and Fran Lonergan saw her low effort skip just wide of the mark.

The final minutes of the contest were an absolute battle with both sides trying to land a knockout punch. The game roared from end-to-end and the crowd were on the edge of their seats.

Then a slick Clydesdale counter saw Millie Steiger finish clinically at the far post in the final seconds to win the contest 3-2.

Inverleith were crowned men’s champions at GALA Day 2020 after a sensational final at Bells Sports Centre in Perth. A goal from Derek Salmond in the final seconds saw the Edinburgh side take victory after a contest of the highest quality.

It was a golden start for Grove Menzieshill when Cammy Golden fired home an early goal with a low strike from a penalty corner for 1-0.

The contest was played at ferocious speed as both sides went hunting for goals, making an excellent spectacle for the fans at bells.

Stephen Dick equalised for Inverleith right at the end of the first quarter. His low flick smashed off the post, zipped along the line, hit the other post and went in for 1-1.

Inverleith enjoyed some pressure as the quarter progressed but found the Grove Menzieshill defence to be stubborn.

The first half came to a close even but promised a big second half of action-packed drama.

Inverleith took the lead early in the second half when Patrick Christie popped up at the far post to convert under pressure. 2-1.

Grove Menzieshill began piling on the pressure and they got their reward when Cammy Golden slammed home his second of the match – a low pile driver against the backboard to make it 2-2.

A penalty stroke went the way of Inverleith and Christie’s effort from the spot went wide of the bottom left corner.

There were 90 second left on the clock when Jack Jamieson equalised for Inverleith with a low finish after a neat penalty corner exchange.

The drama wouldn’t end there. Derek Salmond slipped home a clinical finish with 20 second left to make it 4-3 to Inverleith and steal the trophy at the death. It was a stunning ending to a sensational final.

A dramatic shootout was required to settle the Women’s National League 1 promotion/relegation match with Hillhead retaining their status in the top division.

It was Hillhead who struck an early goal through Zoe Irvine; her well finished low drive against the backboard put the Glasgow side 1-0 up.

Cala began to settle and caused some problems down the right, prompting one good diving save to keep Hillhead in the lead.

Then Cala equaliser through Amie Jayne Russell, a sweet deflection at penalty corner so the ball hit the roof of the net for 1-1.

The Cala surge continued as the first quarter progressed and they almost took the lead at the end of the first quarter. Another penalty corner routine fashioned the opportunity but the ball was well blocked to keep the scores even.

The second quarter became a more tentative affair with neither side creating any clear opportunities.

Then right before half time a lovely exchange between Hillhead’s Zoe Irvine and Olivia Robertson opened the goal for a strike at close range, but the ball managed to escape the attack at pace.

In the third quarter Hillhead took the lead from a penalty stroke – Rachel Osborne slammed the ball into the bottom right corner to make it 2-1.

A Cala penalty corner in the last minute of the quarter was well saved and prompted a goalmouth scramble that Hillhead eventually managed to clear.

Early in the final quarter an instinctive finish by Katie Fleming put Hillhead 3-1 ahead. A lovely deflection wrong-footed the goalkeeper and found the bottom right corner to put Hillhead in the driving seat.

Cala took off their goalkeeper for the final two minutes and threw everything at Hillhead.

It prompted a tremendous late fightback. Angela Davie converted a penalty corner before Abbie Grant finished clinically across the goalkeeper. Suddenly it was 3-3 and running penalties.

The shootout was as close as the match and only one goal separated the teams.

Hillhead’s Irvine slid her running penalty into the bottom left corner for a 1-0 shootout victory.

The Men’s National League 1 promotion/relegation battle required a shootout to decide the winner after an action packed 4-4 draw, with Watsonians relegating Clydesdale in the shootout with a 2-1 win.

It was a good start to the match for Clydesdale when Chris McFadden shot just over bar from an early penalty opportunity.

Watsonians then opened the scoring when a Fraser Sands penalty corner somehow found the back of the net, the ball bouncing innocuously over the line. 1-0.

Clydesdale had an effort saved on the buzzer when Chris McFadden had a shot stopped low at the bottom left corner.

Fraser Sands found the top left corner with the second effort to make it 2-0, bagging his second of the match in the process.

Clydesdale’s Ali Douglas nearly connected with the ball when he dove in at the far post at a cross-goal pass, then Watsonians broke and Dave Patterson shot just wide of the right post on the counter.

Clydesdale pulled one back when a Struan Walker top quality finish from a corner saw the ball hit off the post and in for 2-1.

Early in the second half Walker converted a second drag flick into the top left corner to level the scores at 2-2.

Walker bagged his hat-trick shortly after with a slick close-range finish to lift the ball over the goalkeeper and in for 3-2.

Watsonians equalised through an excellent far post finish by Patterson, his second of the contest to make it 3-3.

The match tore from end-to-end with both sides looking like they could score with any attack.

Ben Galloway put Clydesdale back in front midway through the final quarter, he forced ball home across the goalkeeper.

Immediately Watsonians equalised with a powerful low drive by Sands to make it 4-4 and take the game to a shootout.

The finishing in the shootout was impressive but it was Watsonians who took a 2-1 victory with goals from Sands and Pedro Garcia, and secured promotion in the process. 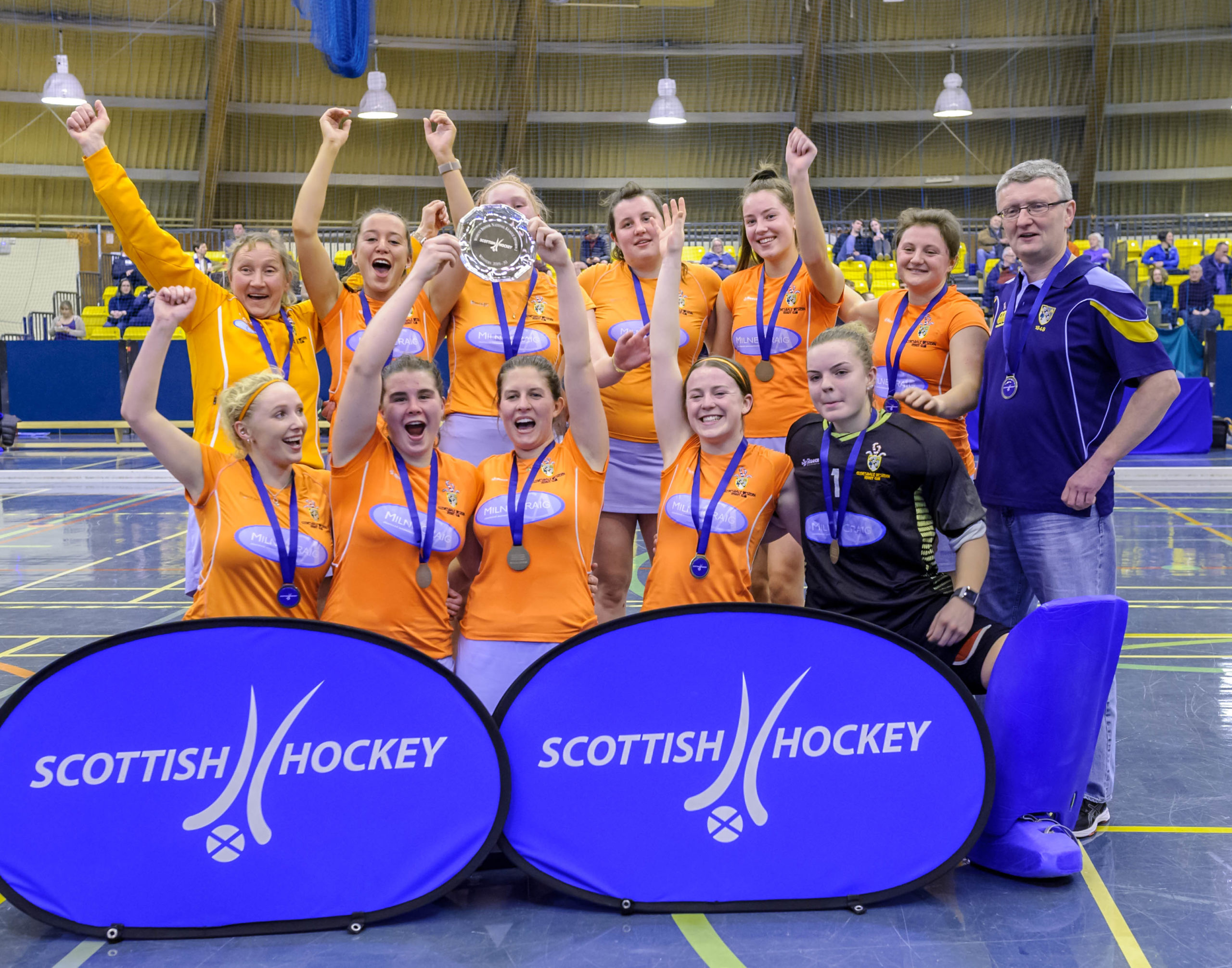