Scotland`s women got a reward for their endeavours with a hard-fought 3-2 victory over Ireland at the EuroHockey indoor Championships 11 in Ourense. However, the day did not start with the same success as the Scots went down 6-2 to hosts Spain.

Scotland coach Iain Strachan previously remarked on yesterday`s Belgian match that the game was not truly reflected in the score, and that might again apply to the 6-2 defeat at the hands of hosts Spain.

The match was fairly even in terms of possession, but what Strachan`s charges could not match was the Spanish clinical finishing – that was the difference between the teams.

And that was highlighted in the first quarter. There was nothing between the teams, except the Spanish scored twice and Scotland didn`t.

The Spanish opened the scoring in three minutes when Rocio Ybarra`s shot was half stopped but was able to trundle over the line.

Emily Dark had the chance to level soon after at a penalty corner but her drag flick was blocked by the keeper. Then an unmarked Fiona Semple got the ball in good position but her effort went weakly wide of the target.

But at the other end Ybarra was not so shy when she deflected a long ball past Jess Buchanan to double the Spanish tally in a score line that certainly flattered the hosts.

The second quarter was again fairly even but provided no further goals. However, the opportunities that were on offer fell to the Scots. A double chance fell to Semple and Sophie Hinds, the first shot was saved by the keeper while the second missed the target.

Another double chance emerged later in the quarter, this time Millie Steiger and Margery Justice saw their efforts from a narrow angle easily blocked by the Spanish keeper.

And that is how it stood at the interval.

There were a few half chances in the third quarter, but in 27 minutes the Scots pulled one back. The penalty corner was won by the tenacious efforts of Jess Ross and Dark fired a flick high past both the keeper and two defenders for 2-1.

But the Scots were unable to build on their comeback, within a couple of minutes the Spanish restored their two goal lead when Ybarra again found herself in space and deflected the ball past the Scottish keeper for her hat-trick. The killer came a minute later with a close range goal by Berta Agullo.

There was no way back for the Scots just before the end of the quarter when they conceded a penalty and Lucia Monsalve gave Buchanan no chance from the spot for a 5-1 lead.

However, Strachan`s charges were not in the giving up mood and raised their game for the final quarter to win three penalty corners for their efforts. Dark`s flick on the first one was saved, but at the second the Watsonians` player swerved to the right and fired her flick high into the net for Scotland`s second of the match. Dark had a third set piece chance not long after but this time her low flick was blocked by the keeper.

In the final minute the Scots were caught out on the counter-attack, Margery Justice had a chance from close range, it was blocked and in the resulting breakaway Agullo sprinted into the Scotland circle and shot past Buchanan for Spain`s sixth.

Although by far the better side the Scots had to dig deep to see off a plucky Irish side, and indeed the victory should have been much more comfortable.

Strachan`s charges could have been two up inside the first minute – Emily Dark had her penalty corner effort blocked by the keeper, then Jess Ross sent her open play effort wide of the target. At the other end Jess Buchanan had to look lively to frustrate the eager Irish forwards.

Millie Steiger then created an opening after a powerful run but there were no takers for her cross.

The opening goal came in seven minutes at a penalty corner which Dark sunk with a low drag flick for a single goal lead at the end of the first quarter.

Within two minutes of the restart a close range shot by Orla Macken levelled the score at 1-1.

Back came the Scots and this time Dark was the provider, he pass was swept home by Sophie Hinds to restore Scotland`s lead. But that didn`t last long as Machen was again on hand to power a low shot past Jess Buchanan.

Fiona Semple sent a good chance wide of the target, but then made amends when the Irish lost the ball in their own half, Heather McEwan put in the cross and the Clydesdale player fired the ball past the keeper.

That made it 3-2 to Scotland at the interval – and that was the end of the scoring.

There were few chances to score at either end in the third quarter. Steiger had her shot blocked by the keeper and a similar fate befell Ruth Blaikie`s goal-bound effort.

But the quarter was peppered with cards – yellows were handed out to Sophie Hinds and Jess Ross which left the Scots a bit short-handed and limited their opportunity to add to their lead.

The Scots were dominant in the final quarter and should have added to their tally. Blaikie had a shot saved, Dark had a clever turn and shot, Semple shot wide and Dark had her penalty corner flick also saved – but no goals.

In a bid to salvage the match the Irish coach replaced his keeper with an additional outfield player in the final three minutes, but it had little impact on proceedings, although the Scots did have to survive a goalmouth scramble which was finally cleared. The Irish search for an equaliser failed and the Scots celebrated their first victory.

Iain Strachan, Scotland`s coach, said: “It was a tough day, we played really well against Spain with no reward, then battled through against the Irish. I think we played six minutes with a player short because of cards, but we defended well. And we`ve still yet to let in a penalty corner.” 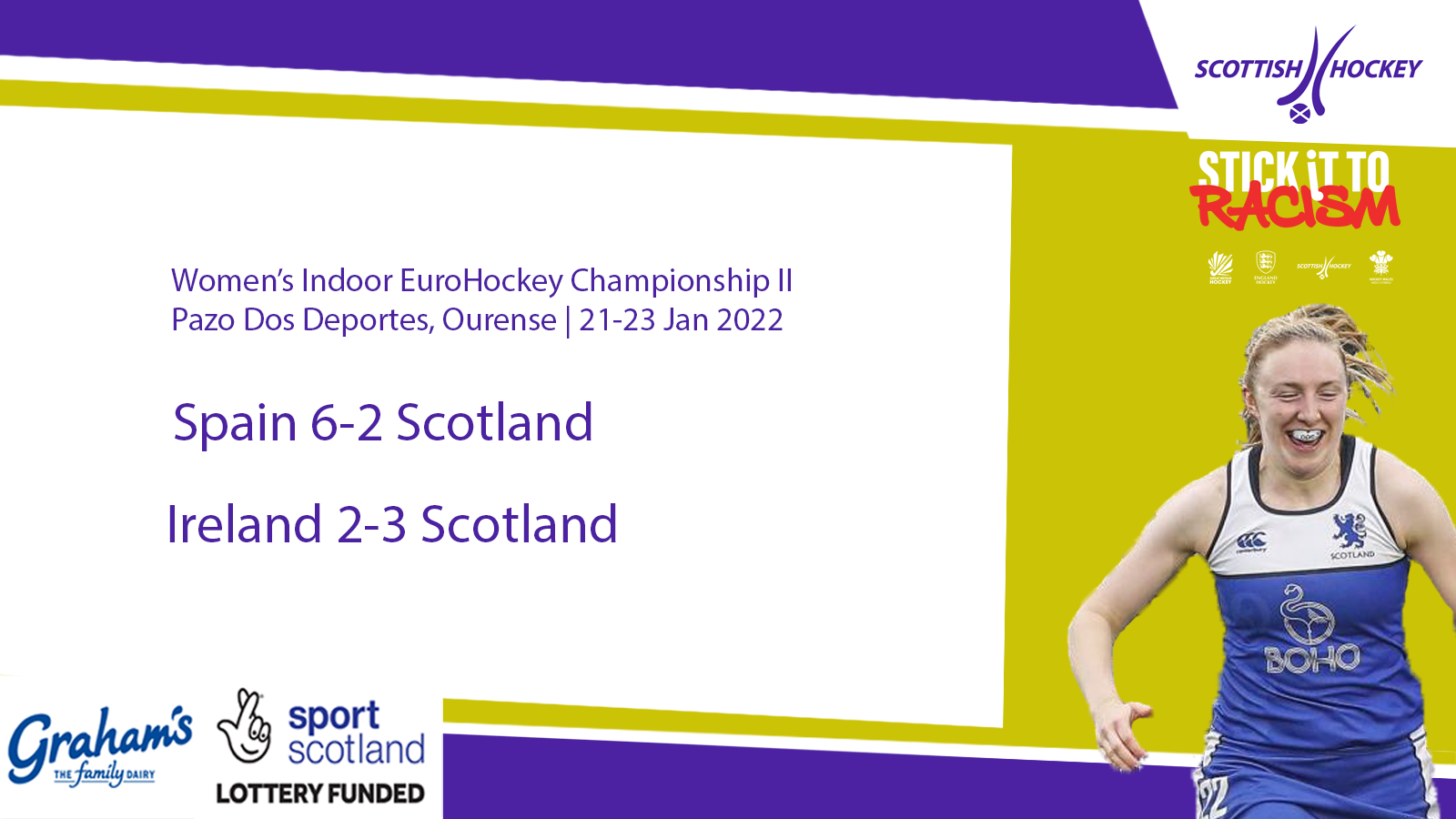