In a Scotland career that saw Kaz earn 163 caps and 16 goals, it all started with a medal in Santiago, Chile, and ended with Kaz leading Scotland to a gold medal, and promotion to the top tier of European hockey, at Women’s EuroHockey Championship II in Glasgow last year.

“It started with a win and ended with an even better win,” Kaz said, “my first tournament was in 2010 when I played in Santiago, Chile. It was an incredible experience. We came second and it was amazing to win a medal in my first tournament.

“I was buzzing to be selected and I learned so much from the experience. The team had such a high standard of Scottish players so it was intimidating to be stepping into the squad, but they were so supportive and this group gave me an insight into the professionalism and drive required to make it as an international player – these players are legends and it was such a great era to be part of.

“I am very grateful to Sheppy (Gordon Shepherd) for giving me the opportunity to prove myself in Chile, and it was one I grabbed with both hands and never let go of.”

The first EuroHockey Championship II brought Kaz a gold medal in 2011 when Scotland won the tournament, and promotion, in Poznan. This success came a year after the incredible experience of representing her country at the Commonwealth Games in Delhi. It was at the tournament that Kaz bagged her first goal for Scotland in a shootout against Wales. Kaz recalled, “I remember taking a flick against Wales in Delhi, which was my first goal for Scotland. I didn’t go all the way to Delhi to miss a flick so I was determined to get the goal against Wales.” It was the first goal in 3-1 shootout victory. To play in front of 20,000 fans in Delhi was incredible and just mind blowing for Kaz.

However, the goal that is most memorable to Kaz now has its own name. It first came out against England, and a carbon copy was seen last year at the Euros in Glasgow. Kaz explained, “My favourite goal was against England in London 2015 – the ‘Kaz corner’, originally called ‘the England Corner’ because it was developed to score in the England game, was perfectly executed and gave us the lead early on in the game. I always looked forward to this fixture against such a world class team and scoring that goal with all my family watching was such a big moment for me. I now claim it the ‘Kaz corner’ as I’ve scored it four times and after three you get to name it!”

The next big stage for Kaz was the Commonwealth Games in Gold Coast in 2018, and another opportunity to play against the World’s top players.

Kaz said, “For a hockey player in Scotland who won’t make an Olympic team the Commonwealth Games is the biggest multi games event you can be part of. It’s such a huge honour and only comes around every four years, and being part of Team Scotland is a phenomenal experience. You step out of the hockey bubble and join a massive collection of the best athletes, coaches and support staff Scotland has to offer, it makes you feel so proud to be a part of.

“The two Commonwealth Games experiences were quite different; I was young in Delhi and was excited but very nervous to perform on such a stage. At the Gold Coast as captain I felt more pressure to lead the team, but this was a pressure I put on myself as I always wanted to play the best i could for my team and country. I loved it all! Challenging yourself to stand up and be counted against world class opposition was why I played. Play against the best, learn from the best and aim to be the best.”

The final appearances in a Scotland shirt for Kaz proved to be successful and saw her end her career with a gold medal on home turf. EuroHockey Championship II at the Glasgow National Hockey Centre saw Kaz captain her country to the gold medal, and promotion back to the top division of European hockey, with a flawless record in front of a sell-out crowd.

Kaz fondly remembered the tournament, “I loved the Euros in Glasgow. I missed out on the Glasgow 2014 Commonwealth Games so for me the Euros was my home games.

“It was amazing to play in front of all my family and friends who have been there throughout my whole journey, they finally got the opportunity to see up close what hockey is all about. With the confidence from the coaching staff and the talented pool of players we had, there was no doubt in my mind we were bringing home anything less than the gold medal.

It’s been an incredible journey for one of Scotland’s best loved players and one that Kaz is thankful for. She said, “I want to thank everyone. There’s so many people who have helped me and inspired me. From the youth coaches to the senior coaches, and from the staff at Scottish Hockey to all the amazing volunteers in the game – thank you for embracing me and letting me run around a pitch.

“Hockey has given me an extended family, friends for life and memories that will last a lifetime. I want to thank my closest friends and family, but most importantly I want to thank the teams I have played with – without them I am nothing.”

Scotland women’s Head Coach Jen Wilson said, “Kaz can be very proud of everything she has achieved and certainly look back with no regrets at all. She has epitomised hard work, passion and dedication with an ‘all or nothing’ approach. Kaz was also always striving for more and wanted to take everyone on that journey.

“An incredible leader both on and off the field and thoroughly deserved to lift the EuroHockey trophy on behalf of the squad last year. Great leaders inspire others to achieve great things and Kaz was certainly a catalyst to this success.

“There’s been many classy goals, like the Kaz corner, some world class passes and some important tackles ingrained in our memories and although Kaz’s international playing career has come to a close we all look forward to seeing her pitch side cheering on Scotland on many more occasions in the future.” 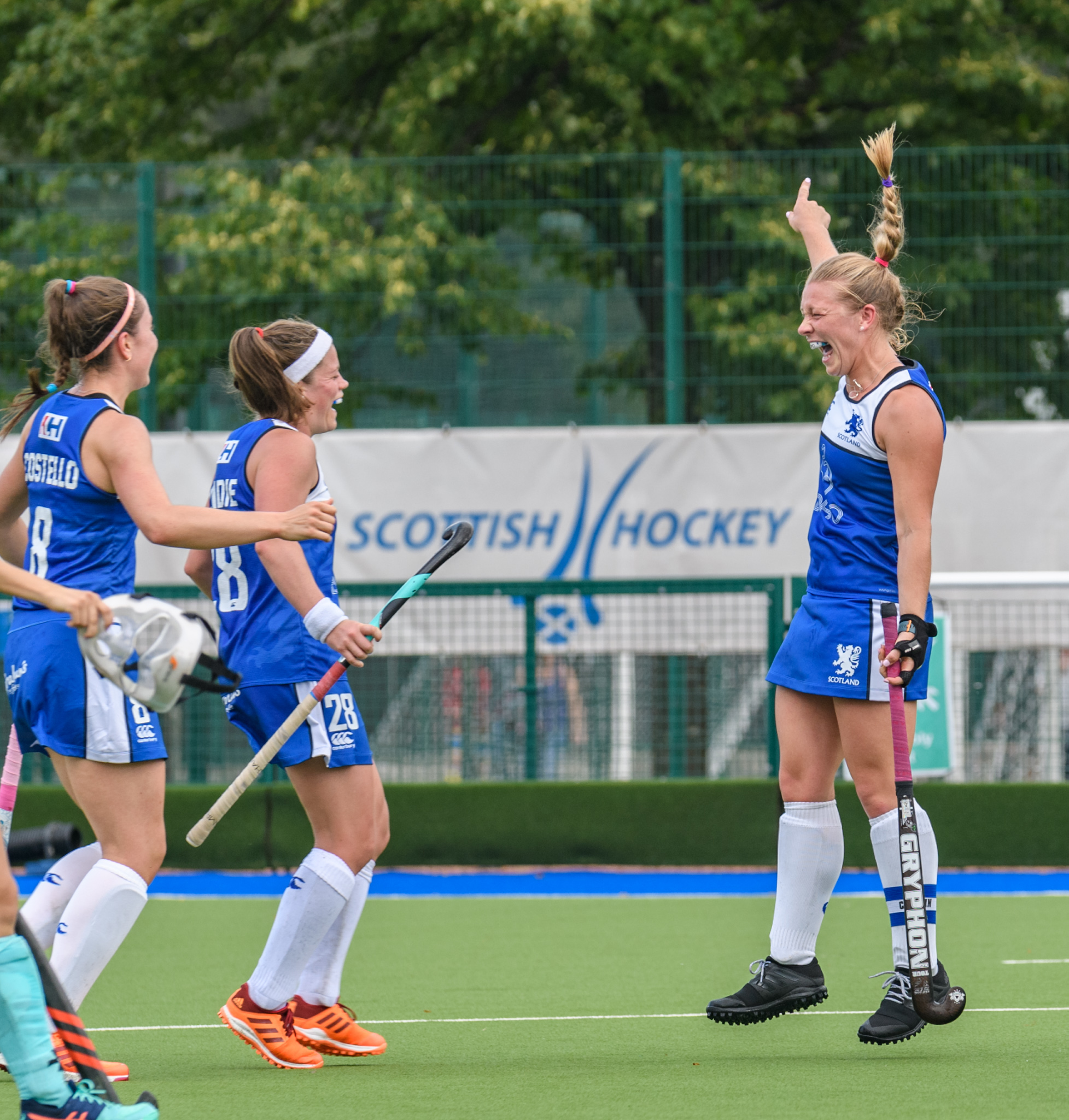