Following the suspension of hockey due to the unprecedented situations presented by the Covid-19 virus, Scottish Hockey can confirm that the 2019/20 league season is now completed for Scottish Hockey’s Premiership; National; Championship; and Regional leagues.

Scottish Hockey’s Management Committee considered all options to complete the 2019/20 season in full on the pitch, as well as partial completion of the season, in detail, and reached the unanimous decision, endorsed by the Scottish Hockey Board, that it is sadly now not possible to complete all the remaining fixtures on the pitch.

The 2019/20 cup and plate competitions are also now completed.

There will be no winners awarded for season 2019/20, and no automatic promotion or relegation, however with the majority of leagues completing over 60% of matches there is clearly a wish for the endeavour of clubs to be recognised. Therefore, teams have been given a placing (see bottom of this page) based on their performance up until hockey was suspended.

The final league rankings for the 2019/20 season have been determined using average points per match, based on the matches completed prior to competitions being suspended.

Three guiding principles were established as part of our decision making process: health and safety; fairness; and practicality.

From the outset of the process we aimed to ensure that no team is negatively impacted by the current circumstances, and as such, there will be no teams automatically relegated or promoted this season.

It is intended that the task force will consult with member clubs with a view to building a route map, aligned to Scottish Government guidance, for the season ahead.

The timeline for this task force is as follows:

We will release our working scenarios document outlining the process of how the decisions regarding season 2019/20 were made along with the task force appointments.

Update 26/06/2020: The Management Committee minutes have still to be agreed and will be released as soon as possible.

What does completion mean?

The current suspension of hockey will continue and no further games will be played in the 2019/20 season.

Why can’t the remaining games be played ahead of the next season?

As part of the decision-making process, all options to complete the 2019/20 season in full, as well as partial completion of the season, were considered.

Due to the level of uncertainty around facilities; social distancing; teams’ access to players; universities; and government restrictions, it is not possible to confirm with certainty when hockey will resume. This break in continuity also means that any restart would not be a fair reflection of the teams who began the 2019-20 campaign.

Next season will start afresh when it is safe and possible to do so.

What is Scottish Hockey’s decision regarding league winners, promotion and relegation?

There is no automatic promotion or relegation in season 2019/20. There will be no winners awarded for season 2019/20. However, with the majority of leagues completing over 60% of matches there is clearly a wish for the endeavour of clubs to be recognised. Therefore, teams have been given a placing based on their performance up until hockey was suspended. Placings were calculated by using average points per game to determine the final positions within the league, see further details below.

It was determined that to relegate any team without fulfilling all fixtures would be unfair. Therefore, in season 2019/20 there will be no relegations.

How were placings worked out?

All games played before the suspension (00:01 on 14 March 2020) were included in calculating league standings. Placings were calculated by using average points per game to determine the final positions within the league.

Why was points per game average used?

Due to the uneven number of games played within leagues it was determined that the fairest calculation was the points per game average as this aligned with our principle of fairness, and ensures that no team was disadvantaged/advantaged as a result of less/more games played.

Prior to the announcement that all hockey would be suspended there were two forfeited games due to be played on the 14th March. It was decided to exclude these games from the average points per game calculation as they were due to be played after the suspension, which begun on 14th March.

Who will represent Scotland in European competitions next season?

Scotland’s European representatives for next season have been determined by the 2019/20 points per game placings. This was unanimously approved in a vote by the Management Committee who felt teams competing in the 2019/20 season are a more accurate reflection of competitive standards than that of team positions from the previous season.

Are the cup and plate competitions still going to be played?

No further cup or plate games will take place in season 2019/20 and no winners will be awarded.

Will clubs be offered a refund or credit for the 2019/20 season?

Yes, all teams involved in our leagues will be offered 40% credit for their entry fee of next season’s competitions, or have the opportunity to allocate that money to support Scottish Hockey youth teams in 2021.

What does this mean for youth competitions?

Recently Scottish Hockey announced that all domestic youth competitions planned for the period up until the end of August have been cancelled.

This includes the U12, U14 and U16 festivals in May and June. The U16 National Club Cup and the U14 Inter Districts.

Are cards and suspensions carried over to next season?

Yes, any individual who received a match ban that was not served in season 2019/20 will have their ban carried over to the first games of next season.

Any yellow cards that were given in 2019/20 season will stand and as per the discipline code, any individual who accumulates four yellow cards in the same competition within any 12 month period will receive a suspension.

When will next season start?

We will be guided by the Scottish Government and public health authorities in making any decision to resume hockey. We will consult with clubs to establish their readiness to restart formal competitions and any specific barriers they may face.

What is the format of next year’s competitions?

Scottish Hockey will be consulting with our clubs on the structures for organised competitions next year. The consultation documents will be sent to our clubs by 10 July.

How many teams will get relegated from each league in season 2020/21?

We need to wait for league structures to be finalised before we confirm this. We plan to work to the principal that every team that wins their league will have a chance to be promoted either automatically or through a playoff, and at least every side that finishes bottom of a league will either be relegated or face a relegation playoff. If there is a significant change to the structures in 2020-2021 there may be a requirement for further relegation. This will be communicated in advance of any league starting.

Who will be on the task force?

The Scottish Hockey Board will appoint the task force and its members will be circulated with the initial consultation.

What happens if our team wants to play in a lower league?

When the structures are confirmed for the upcoming seasons, clubs will submit their entry forms. If a team wishes to play in a lower league, then they should speak to the Competitions and Events Manager who can advise.

If you have any further questions, or any feedback, please contact [email protected]

Final league rankings for the 2019/20 season

These ranking have been determined using average points per match. 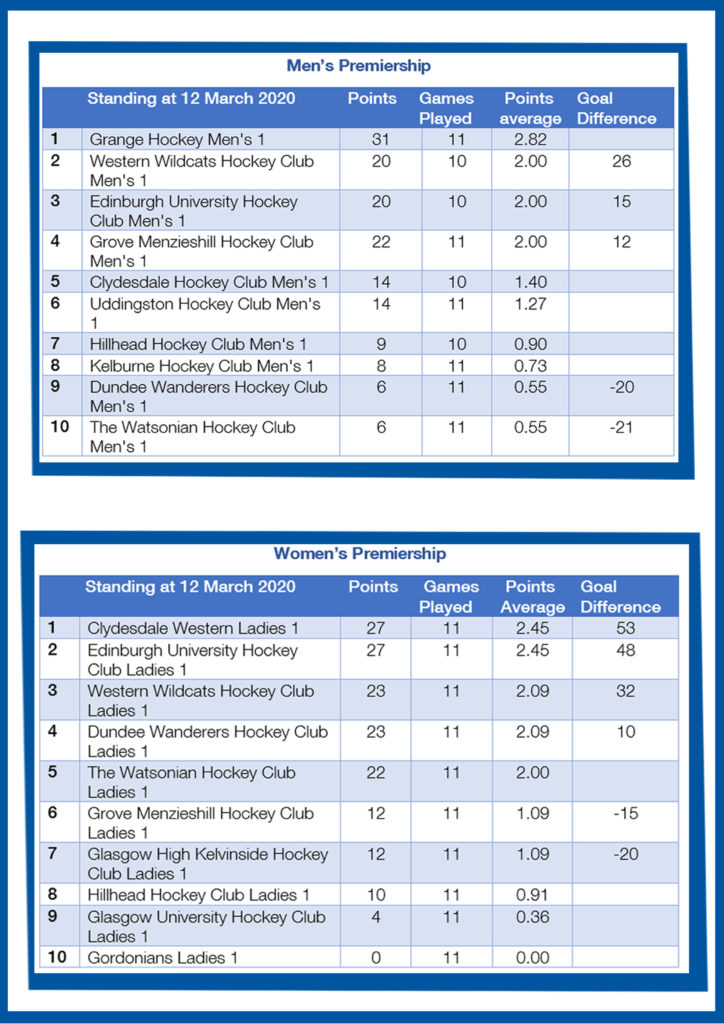 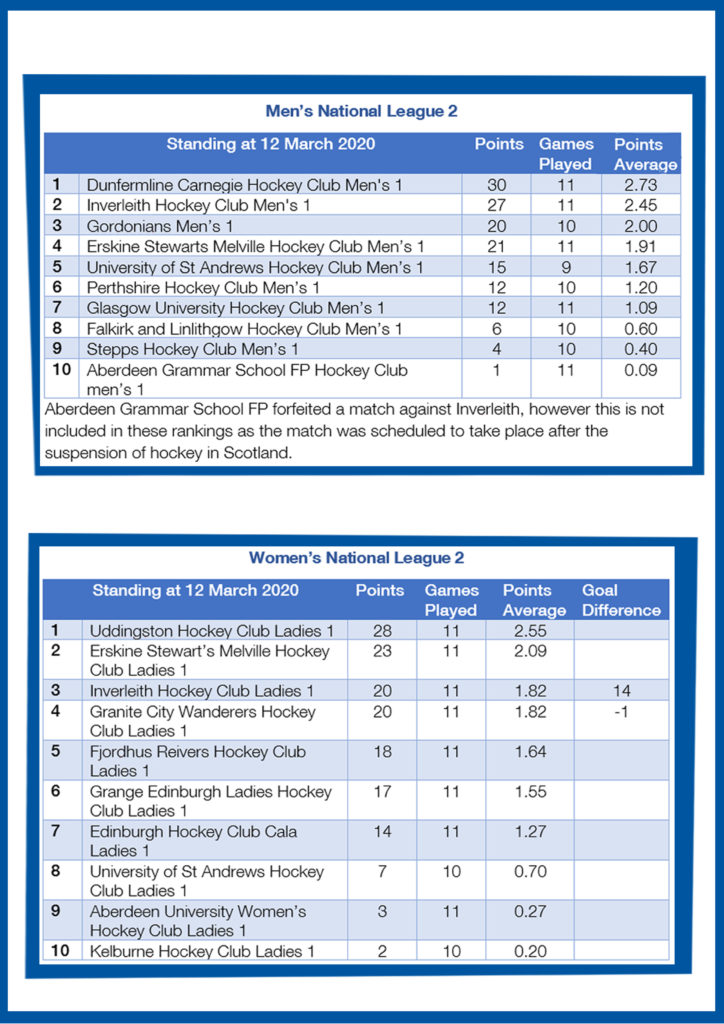 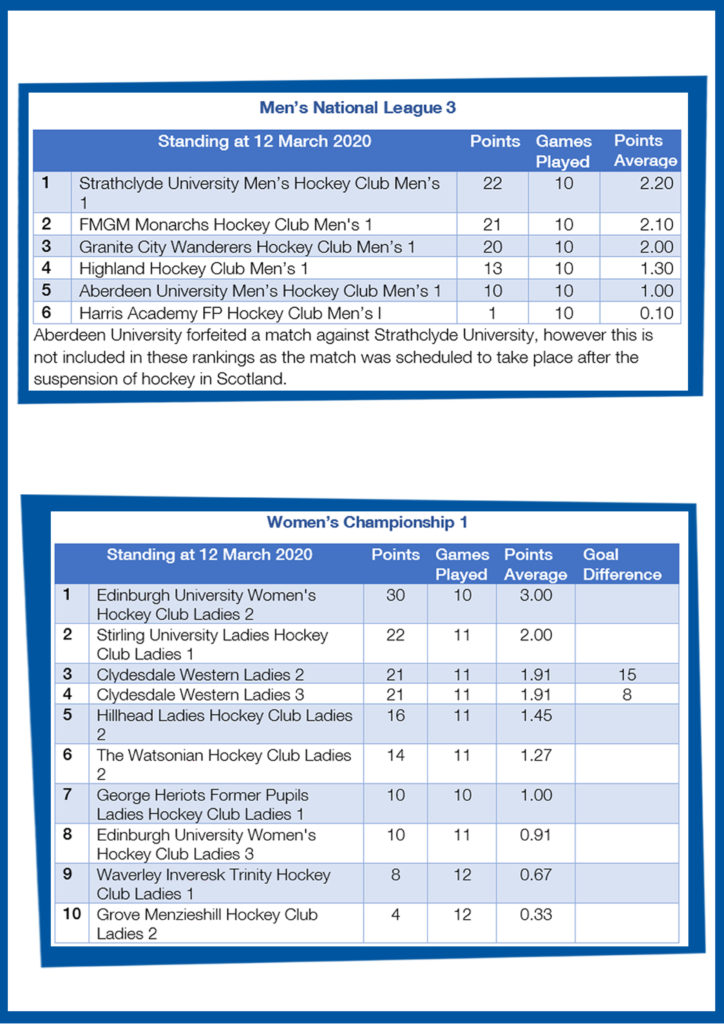 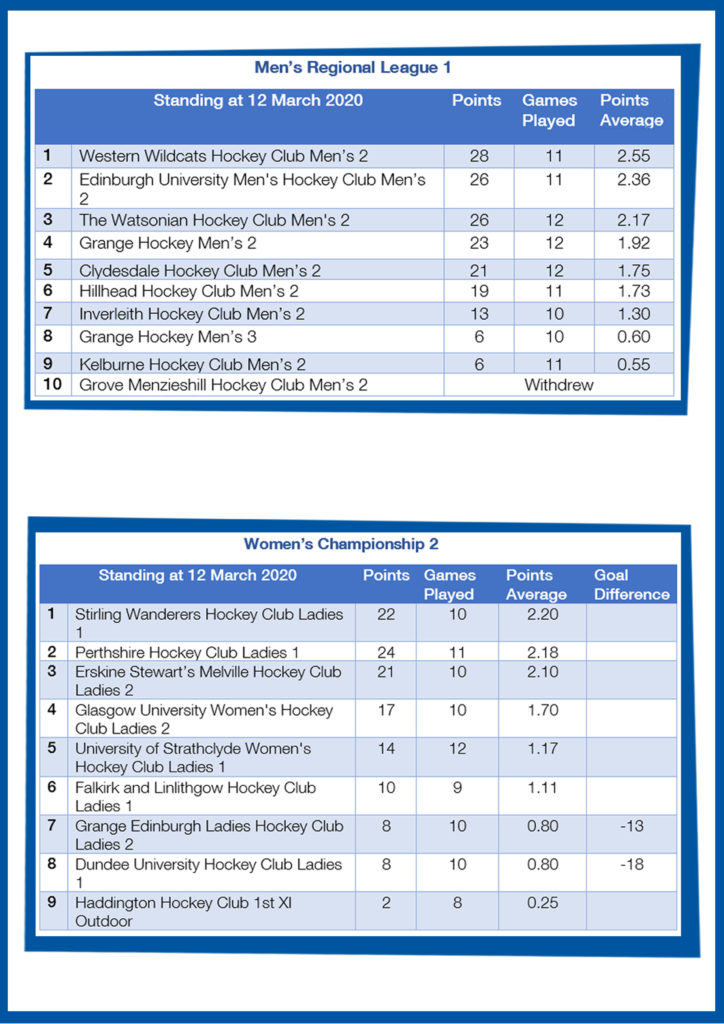 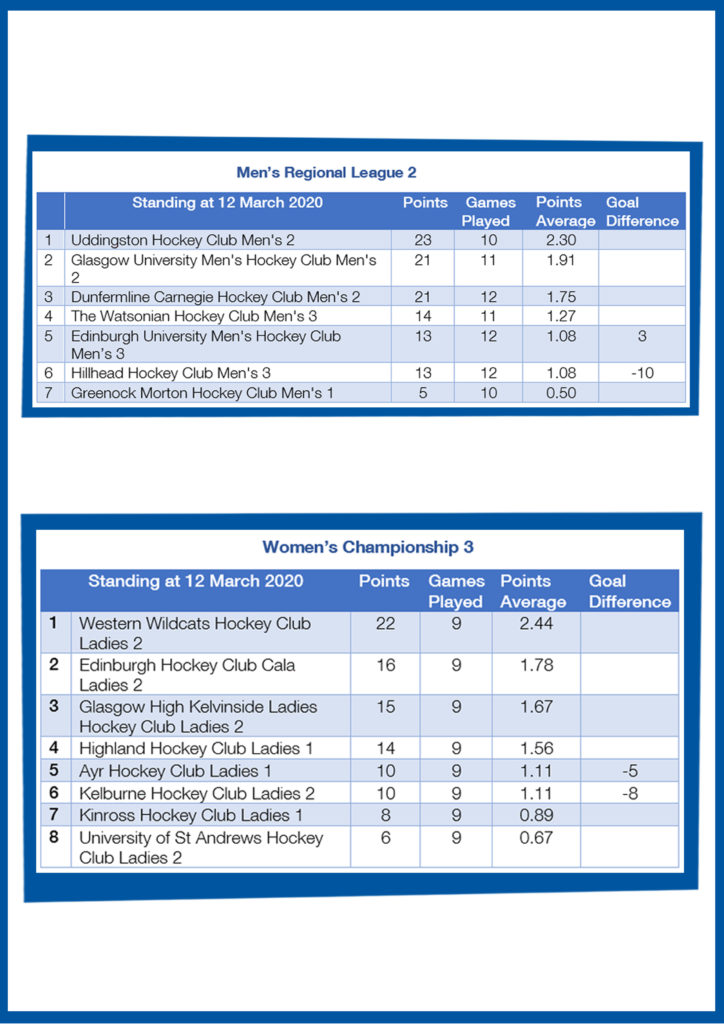