First of all, the Scottish Hockey (SH) Board hope you, family and friends are well.

In these currently challenging times, the impact of Covid-19 has had major impacts on our lives and the sport of hockey. Over the past few weeks SH Board has had to make interventions that it would never have imagined having to make. The SH Board are aware that many clubs / members are unhappy with the situation we find ourselves in, have been critical of the decisions made, and are looking for clarity and leadership from the SH Board. As a Board we recognise that we need to improve the way in which we communicate with clubs and members, and are therefore taking this direct approach to reach out for your help in deciding the most appropriate way forward.

During the SH Board meeting on the 1st June 2020, it first became apparent to the SH Board that the Management Committee (MC), a sub-committee of the Board, was not functioning effectively and was finding it very difficult to make decisions on season 2020 – 2021; despite having a structure of four volunteer and four staff, with the President as Chair holding the carrying vote. It was recognised that the issues being presented to the MC were far greater than could have been envisaged when the MC was established. This was further compounded by evident communication challenges, difficulties in managing potential conflicts of interest and achieving consensus.

Within this difficult context, and the need to quickly inform members of decisions on how hockey will restart, the SH Board made the unanimous decision to suspend the MC and take direct responsibility for matters currently falling under the remit of the MC for the immediate future.

This was not the intervention that the SH Board wanted to implement as the SH Board’s clear remit is run the business and ensure that there is a robust strategic framework to guide the development of hockey. The SH Board made it very clear that this was a very temporary measure and responsibility for sporting matters will be separated from the Board again as soon as possible and the SH Board will ensure that good governance is in place across all areas of the organisation.

Subsequently, the SH Board endorsed the MC’s recommendations on finishing the 2019/2020 season and selecting the clubs to represent Scotland in European competitions next year. However, to ensure that all members had a say in shaping how hockey will restart – all leagues and competitions – the SH Board recommended a Task Force be created to fully engage and consult with members across all of Scottish Hockey in order to ensure that the challenges faced by different groups of stakeholders could be fully considered. This Task Force, with excellent outreach (we have learned from your feedback), has now been established – see Annex A for membership) – and will be activated if the Trustees agree this as their preferred way forward. The Task Force is due to report its decisions on the 24th July 2020. This is a firm commitment.

During this short period, the SH Board will also form a group of members led independently by Martin Shepherdson, to review the Terms of Reference and membership of the MC, in order to ensure the MC is supported to be in a position to discharge its responsibilities when we emerge from the current crisis hopefully in late July. This will then be presented to members at the AGM in September 2020.

In parallel to these SH Board initiatives, the President has put forward an alternative proposal. This will involve the immediate reinstatement of the MC with the same Terms of Reference, but with revised membership; there will be the President, Vice-President, officials convenor, three individuals to the committee and three SH staff – see Annex B for membership. The MC will continue as before to make decisions, on behalf of members on the operation of hockey.

The SH Board recently reached out to the President to try and bring the two groups together since the aims were to reach the same outcome. However, this compromise was rejected by the President who felt that it was not what the clubs wanted.

The SH Board are keen to ensure that the decision on how best to proceed is placed in the hands of our Trustees, who we feel can best provide a balanced view on what is in the best interests of the sport. We are therefore asking each club to state your preferred option for the way forward:

We would like to announce the decision by Monday 29th June 2020 and would therefore ask you to respond to this request by Friday 26th June 2020. Responses can be sent to this specific e-mail address:
[email protected]

As always, the SH Board wants the best for Scottish Hockey and its members, and we look forward to your response.
Take care,

Scottish Hockey Board of Directors

ANNEX A: MEMBERSHIP OF TASK FORCE

The Task Force will have a Steering Group with a number of subgroups with key stakeholders. The Steering Group will ask the subgroups to consider a range of topics, and to report back with recommendations. The Taskforce will report to the Board of Scottish Hockey. 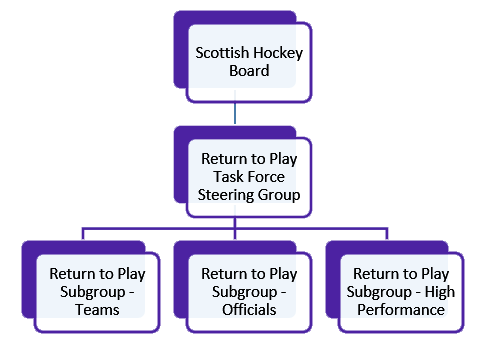 • Keith Joss, West District Men’s President – responsible for engaging with all other Districts

• Jamie Frail – Head of Domestic Game – and member of the Teams subgroup;

Members – to be agreed but including:

Download the PDF of the President’s Proposed Management Committee