Scotland’s women won their opening match of the 2022 Commonwealth Games in Birmingham with a thrilling 4-2 victory over South Africa. Charlotte Watson, Sarah Robertson, Fiona Burnet and Jen Eadie were the scorers as the Scots got their campaign off to a flying start in front of their passionate supporters at the University of Birmingham Hockey and Squash Centre.

Scotland started strongly and deservedly took the lead after 7 minutes when they converted a penalty corner. Amy Costello returned the ball to Charlotte Watson to slot home.

4 minutes into the second quarter Scotland were level. A superb run from Millie Steiger set up captain Sarah Robertson to score into an open goal. South Africa’s forwards were stretching the Scottish defence but Amy Gibson made two superb saves to keep the scores level at half-time.

Chris Duncan’s team flew out of blocks in the second half, and Sarah Jamieson’s skilful run won a penalty corner after 2 minutes. Amy Costello’s shot was brilliantly saved but Sarah Robertson kept it alive and crossed for a superb deflection from Fiona Burnet to put the Scots 3-2 ahead.

A thrilling end-to-end match continued at a frantic pace with both teams creating chances. Nikki Cochrane made two world-class saves to keep her team ahead.

The pace didn’t let up in the final quarter. Heather McEwan had a goal disallowed as the whistle had gone. However, from the resulting penalty corner Jen Eadie’s powerful strike deflected off a defender’s stick into the roof of the net. This gave the Scots a 4-2 lead with 8 minutes to go.

The Scots continued to create chances, with Jamieson’s brilliant cross narrowly evading Burnet. At the back, the defenders worked incredibly hard to deny their lively opponents any space. A yellow card for Becky Ward meant the Scots had to withstand sustained late South African pressure, but they calmly saw the game out.

It was a great start to the Games for the hard-working Tartan Hearts. Their next match is tomorrow evening when they take on New Zealand, who beat Kenya in today’s earlier match. Tonight, Scotland’s men start their campaign against New Zealand. 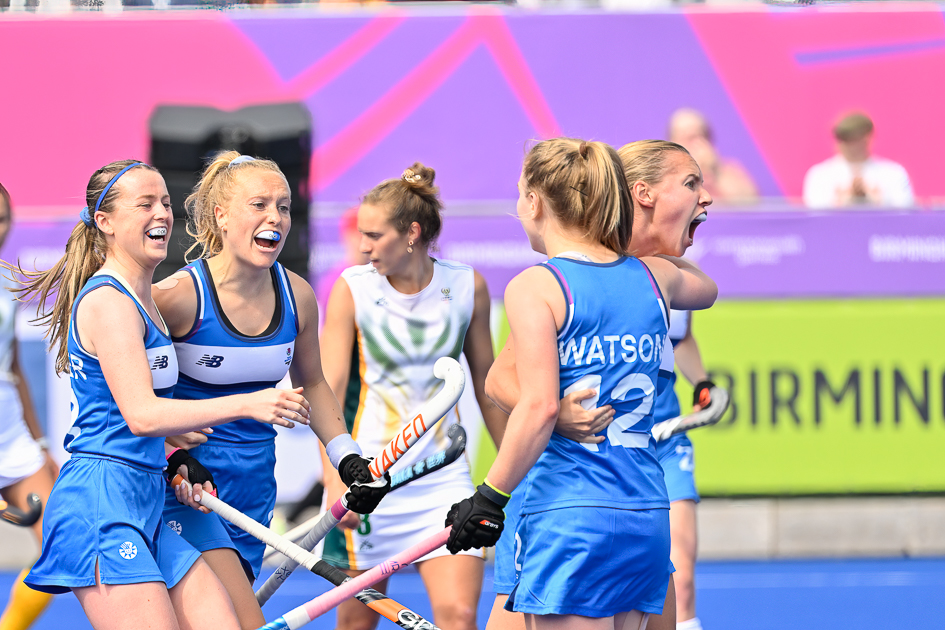