Scotland women left everything out on the pitch against the world’s top-ranked team but were defeated 10-0 at the EuroHockey Championships in Amsterdam. Scotland now enter Pool C and will Play Italy on Friday, and England on Saturday, to decide the relegation places.

Scotland’s work rate from the start of the match was exceptional and the world champions had to work hard to break the Scots down.

The hosts eventually did so through a composed finish by Eva De Goede when she slipped the ball across Amy Gibson at a penalty corner rebound to make it 1-0.

It went to 2-0 just before the end of the first quarter following phenomenal penalty corner save by Gibson, but the rebound was buried by De Goede for her second of the match.

A third goal came moments after when the ball was buried from a tight angle by Marloes Keetels from another penalty corner rebound.

In the second quarter Scotland built a blue wall around their circle and defended superbly well to keep the world champions out. A surging run by Sarah Jamieson gave Scotland an opportunity from a counter attack, but she was crowded out just shy of the Dutch D.

At the start of the second half Frederique Matla got her name on the score sheet for the Dutch when she slammed a low and hard penalty corner into the bottom left corner.

Then a tremendous diving save by Gibson at her top left corner denied a fifth for the Netherlands. It would be 5-0 soon enough when a burst of pace by Keetels saw her zip into the Scots D, and she found the net with a delightful backhand dink over the advancing Gibson.

McKenzie Bell nearly scored for Scotland with an excellent snap shot on the backhand turn, but she found the strong pads of the Dutch keeper and the ball was booted clear.

The tenacity of Maria Verschoor forced home a sixth goal before a seventh goal arrived a short time later through a close range finish by Felice Albers.

Into the final quarter and a rocket by Verschoor made it 8-0, then the unstoppable Verschoor scored an almost identical goal to make it nine for the home side.

The brave Amy Costello was struck on the head by the ball on the line at a penalty corner Matla converted the resulting penalty stroke to make it ten.

Sarah Robertson had a chance for Scotland at the end, when she powered into the Dutch D, but the keeper stood up to the effort and retained a clean sheet for the phenomenal Dutch side.

Jen Wilson said, “We knew this would be an incredibly tough game, and we challenged ourselves against an absolutely world class outfit. We had periods where we defended well, but there were times where their class really showed.

“I’m proud of the moments where we took the game to them, and the players never stopped running right up until the end. But we have to be mindful of where we are on our journey, and where the Dutch are on theirs – preparing for the Olympics and are hosting the European championships.

“Now we’ll put this game to rest and look forward to our next game against Italy. We know Italy well, we we’re promoted together, and this will be a good battle.” 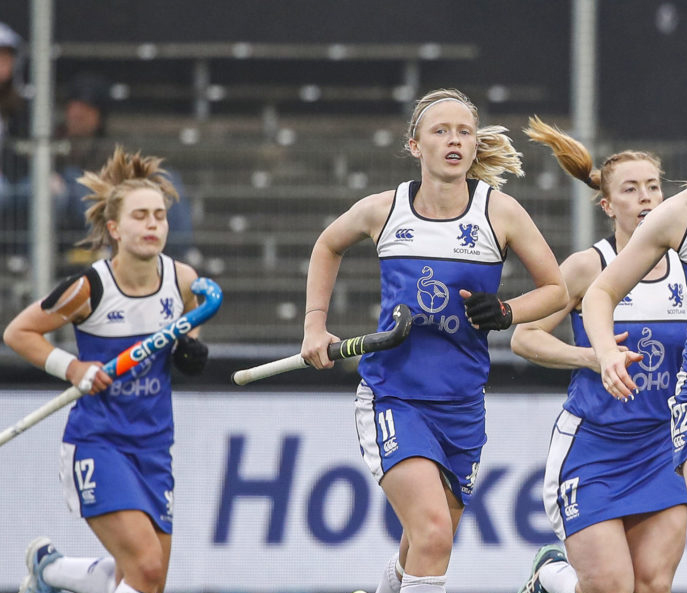