There were some great moments, and some excellent play, which gives the Scots a lot to build on for day two of the tournament.

A clinical final quarter by Belgium made for a 5-1 score line as Scotland got their indoor Euros campaign underway.

It was a very even start to the contest. Scotland enjoyed some good distribution from the back by Emily Dark, but there were no clear chances for either side in the early stages.

Midway through the opening quarter came a good save by Carmin Dow, who shot out quickly to the edge of the D and prevented Belgium from taking the lead.

Scotland then took the lead through a lovely low finish by Heather McEwan. A sweet pass from deep in the Scotland half found McEwan in space who made no mistake with the finish to put Scotland 1-0 ahead.

Early in the second quarter Belgium was awarded back-to-back penalty corners but the Scotland defence dealt with them well.

A period of good pressure by Belgium led to a penalty stroke award, but Joanne Peeters missed the chance to equalise from the penalty spot.

Then Belgium’s pressure paid off and they struck an equaliser right before half time, squeezing the ball home at the near post, to even the score at the break.

As the third quarter got underway a great chance came for Scotland through a Fiona Semple counter attack, but the final pass to Ruth Blaikie was well blocked by the goalkeeper.

It was end-to-end towards the end of the third quarter with both sides creating chances to score, but it was Belgium who eventually found the net.

Morgane Vouche gave Belgium the lead right on the Q3 hooter. The finish came from a far post tap in after a slick counter down the right.

A few minutes into the final quarter it went 3-1 for Belgium with Elizabeth Mommens looping the ball home into an empty net.

Belgium struck a fourth with three minutes to go with a great finish by Daphne Gose into the top right corner. Belgium led 4-1.

Then a strike from the top of the D by Marine Truyens finished the scoring giving Belgium a 5-1 win.

Head coach Iain Strachan said, “It was a tight game and not truly reflected in the score. It was always going to be tough; they have thrown a large amount of time and resources at indoor as they were going to be hosting a world cup in a few weeks.

“We played our defensive shapes well and a few mistakes were costly. In this format every game counts so we’ll put this one to bed and move on to the next game. Again we’re facing another team coming down from the A division so this will be tough as well.”

Scotland was all set for a victory over Switzerland until a last-gasp equaliser made the Scots settle for a point to round off day one in Spain.

Jess Ross took the armband for Scotland in what was a fast start to the game with the contest racing from one D to the other.

Switzerland created the first great chance of the match but Sarah Zepf slid her shot just past the post under pressure from Jess Buchanan.

It soon went 1-0 to Switzerland; Sofie Stomps struck the net with a powerful strike from the top of the D to give the Swiss the lead.

The lead wouldn’t last for long and Emily Dark sailed a drag flick into the roof of the net to make it 1-1.

It would be Switzerland who would get their noses back in front when Zepf scored from close range to give Switzerland a 2-1 lead.

In the second half an equaliser looked on the cards when Scotland strung together some lovely hockey on the counter to carve open Switzerland, but the final ball evaded Heather McEwan for a finish.

Scotland’s deserved equaliser soon came, however, and it was Millie Steiger who fired home a superb low drive to make it 2-2.

Ruth Blaikie made it 3-2 early in the third quarter with a sweet low finish, and Scotland looked on easy street.

Before long Dark very nearly made it 4-3 but her drag flick was blocked.

The Swiss took off their goalkeeper for the final five minutes and peppered the Scots D, but found Scotland’s defence holding up strong.

Then, with seconds to go, Scotland got punished for a defensive lapse. A last gasp equaliser by Stomps for the Swiss made it a 3-3 draw to round off Scotland’s games on day one of Women’s Indoor EuroHockey Championship II.

Head coach Iain Strachan said, “We played really well, and stuck with the plan, and came so close to a great win. The Swiss took off their keeper for the last six minutes which gave them an extra player for the end of the game, which was tough. We had a corner and nearly put the game to bed before they scored right at the end when we made a mistake, and that’s the difference at this level.

“Our first three games are against the top three ranked sides in the tournament so it’s a very tough opening for us, but we’re playing great, working hard, and we’re improving every minute we play.” 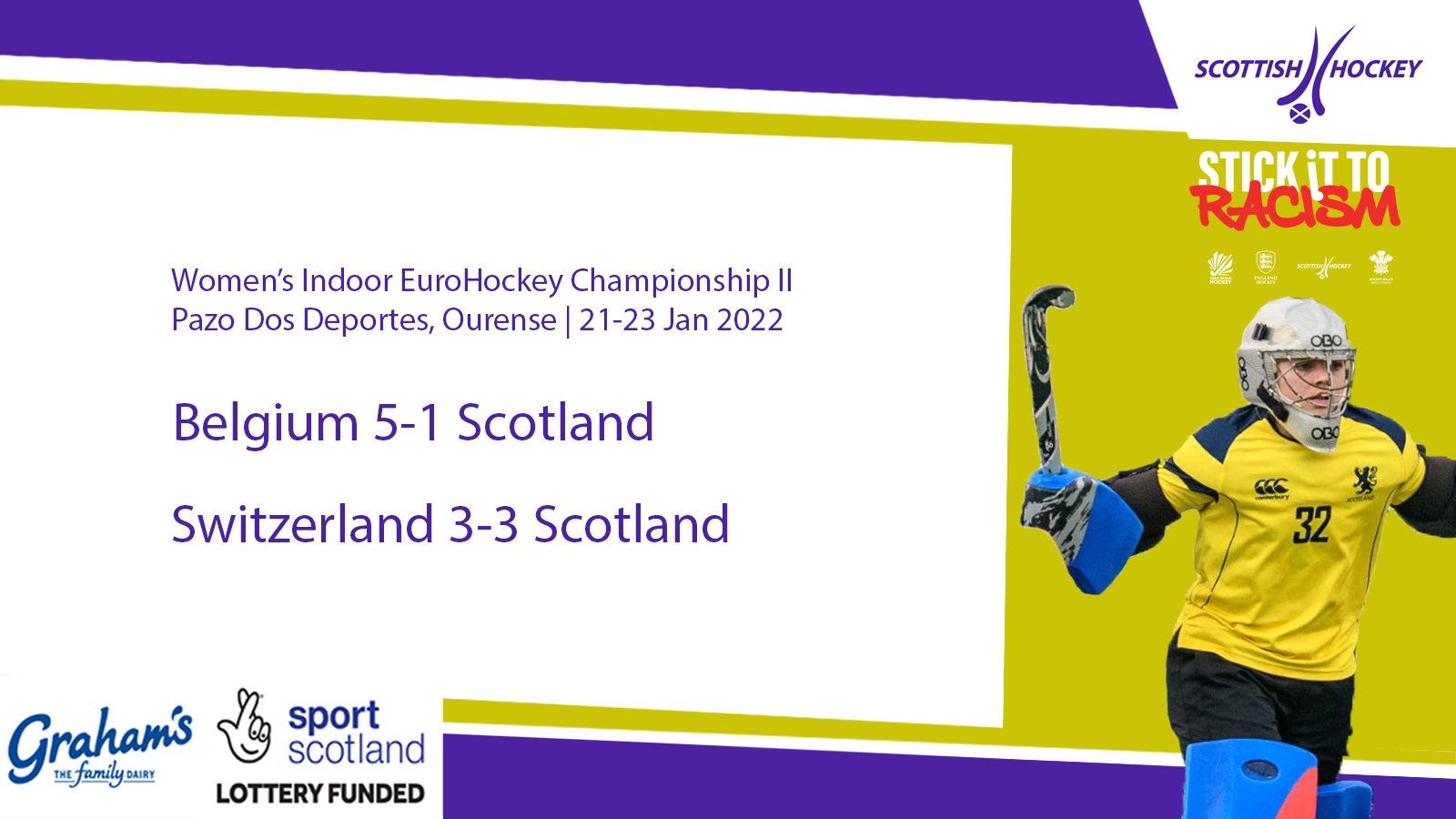