Scotland women lost 3-1 to England in their last match of the EuroHockey Championships in Amsterdam. McKenzie Bell was Scotland’s scorer, with an excellent goal, but it was England who took the victory in a close match.

The match gave a debut to 21 year old Ellie Wilson who replaced Laura Swanson in Scotland’s line up.

The contest got off to a quick start and Isabel Petter scored an early goal for England after some good work down the left. The ball found its way to Petter who forced it home at the second attempt.

Despite the early strike it was a very even opening quarter with the contest evenly matched all over the pitch.

Scotland’s first real opportunity came through a penalty corner in the second quarter, won after some lovely stick work by McKenzie Bell. Robyn Collins struck the penalty corner but it was charged down and blocked.

Then Scotland got a deserved equaliser, and a lovely goal it was too. Amy Costello fired the ball at pace into the D and McKenzie Bell sent a lovely deflection into the net for 1-1.

The score wasn’t even for long when England retook the lead. Lily Owsley scored a rebound at a penalty corner to make it 2-1.

Scotland continued to look threatening in the second half as the Tartan Hearts went looking for a second equaliser. It would be England, however, who would find the net next when Owsley scored her second from close range

Scotland still battled hard and took off Nikki Cochrane to play with eleven outfield players for the last few minutes. There would be no further goals and the Scots lost their final match despite a good performance.

Head Coach Jen Wilson said, “It was an incredible performance, we’ve talked about getting stronger and stronger with each game we play and we showed that today. We pushed England all the way. We had great performances all over the pitch, and it was pleasing to see Ellie Wilson come in at such a late stage and play outstanding on her debut.

“We’ve finished above our ranking, which shows we’re on the right track, and I’m super proud of the players. With the resource and time we’ve had together it shouldn’t be a level playing field, but we made it a level playing field. The players know there’s moment where we can be better, but the more we play against the top teams the more we’ll progress.” 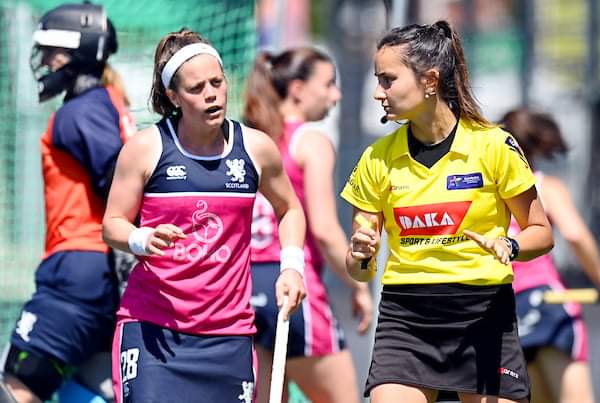