Scotland’s Men were given a hockey masterclass by Australia in their second match at the 2022 Commonwealth Games at the University of Birmingham Hockey and Squash Centre.

The top-seeded Kookaburras were clinical as they scored six goals in each half to record a 12-0 win against a hard-working Scotland team.

The Scots went into the match with confidence after their draw with New Zealand and created the first chance when Andy Bull’s shot went just wide. When Australia did create a 1v1 chance David Forrester was out quickly to make the save.

The Kookaburras opened the scoring a minute later when Govers unleashed an unstoppable drag flick into the top corner. And they then had another effort disallowed by the video umpire. However, in the blink of an eye it was 3-0. Firstly, Brand scored from open play before Haywards fired home a penalty corner.

The Scots were struggling to contain their opponents and they did well to defend two penalty corners at the end of the first quarter to keep the score at 3-0.

Within two minutes of the restart it was 5-0 as Wickham scored a double from breaks up the right.

The Kookaburras, aiming to win gold for the seventh straight time since hockey was first introduced to the Commonwealth Games in 1998, were in scintillating form. And it was soon 6-0 when Haywards scored another penalty corner.

The Scots continued to work hard and Bull’s pass to Struan Walker earned a penalty corner. Walker’s shot was saved before Duncan Riddell fizzed a shot past the post to draw the first half to an end.

Australia began the second half in ruthless form and were 9-0 up within five minutes. Brand, Simmonds and Ephraums scored as the Scots struggled to deal with pin-point aerial balls. Scotland responded by winning two penalty corners, but both of Jamie Golden’s shots were saved. However, the Kookaburras hit double figures in the 67th minute when Haywards completed his hattrick from another penalty corner.

The third quarter finished with chances at both ends. Scotland were unable to convert two more penalty corners before Tommy Alexander made two superb reflex saves.

The penalty corner count continued to rise at the start of the final quarter, with Jamie Golden’s two efforts saved. However, their clinical opponents converted two of their own by the 53rd minute. Firstly, Ephraums dived to deflect home before Haywards scored his fourth of the game to make it 12-0.

Derek Forsyth’s charges were having to work incredibly hard to contain their rampant opponents and nearly scored when Cammy Golden’s penalty corner was cleared of the line. They did incredibly well to keep a clean sheet in the last seven minutes, with Alexander producing two more world-class saves.

The Scots never gave up and looked like they had scored a consolation goal when Struan Walker smashed home. The umpire gave the goal but the Australians asked for a video referral and it was overturned as the final whistle was adjudged to have already blown before the ball crossed the line.

It was an awesome display of attacking hockey from the Kookaburras, who scored 7 of their 15 penalty corners. Unfortunately, the Scots were unable to convert any of their eight penalty corners.

The Scots applauded their fans as they took a standing ovation for their efforts, and celebrated captain Alan Forsyth’s 150th Scotland cap. It was a tough day at the office, but they will have learned so much from playing the best team in the world. 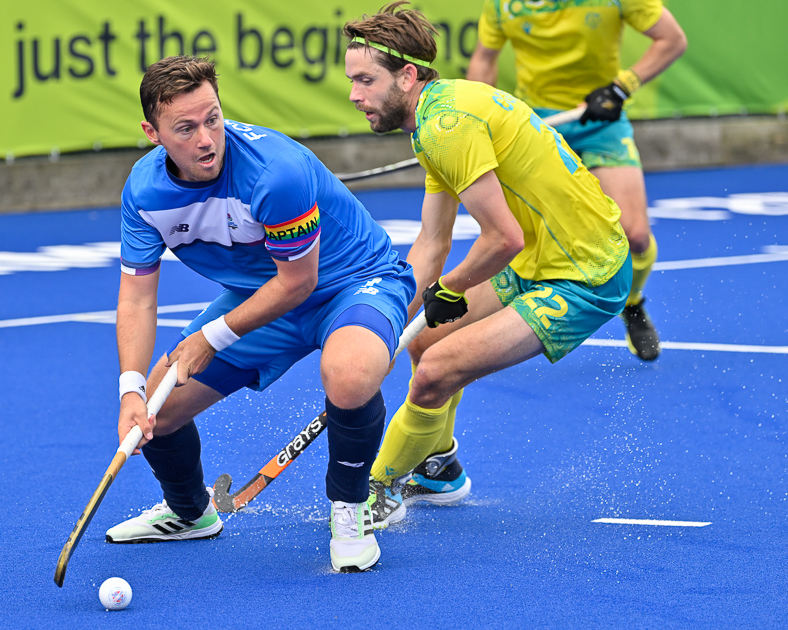