Scotland Men edged out by South Africa in nine-goal thriller

Scotland’s Men snatched defeat from the jaws of victory against South Africa at the 2022 Commonwealth Games. Their 5-4 loss in front of a huge crowd at the University of Birmingham Hockey and Squash Centre was hard to take after leading with four minutes to go.

The game was only 90 seconds in when South Africa opened the scoring as Dayaan Cassiem finished a fast break superbly into the top corner.

The Scots struggled to keep the ball and get any momentum in the early stages with passes going astray, which played into the hands of their lively opponents’ counter attack. However, they so nearly scored with their first attack when Robbie Shepherdson’s deflection from Struan Walker’s cross whizzed inches past the post.

Both sides struggled to create chances as the play fizzed from end-to-end, but the first quarter ended without more goals.

The Scots started the second quarter well, with Walker shooting wide. Soon after tremendous running by Duncan Riddell up the right earned the first penalty corner of the match. Cammy Golden’s shot was heading for the top corner until the defender made a superb save.

A loose pass by Rob Field gave South Africa a turnover and seconds later the ball was in the net as Spooner finished a fast move. In a feisty first half, Rob Harwood picked up a yellow card for a tackle. The score remained at 2-0 at half time.

Head coach Derek Forsyth’s half time team talk clearly worked, as the Scots came flying out of the blocks. Two minutes into the second half, Scotland won a penalty corner and South African indiscipline cost them a player. Andy McConnell smashed the ball into the bottom corner to reduce the deficit to 1-2.

Three minutes later, it was 2-2. Murray Collins’ superb long pass found captain Alan Forsyth on the penalty spot. As he has done so often in his career, he turned on a sixpence and smashed it past the ‘keeper.

On 38 minutes, a brilliant interception by Harwood set up Cammy Golden and his rocket from a tight angle somehow ended up in the net to make it 3-2. What a turnaround by the rampant Scots.

A minute later the South Africans won their first penalty corner of the match but ‘keeper Tommy Alexander made a smart save. And seconds after Forsyth won a penalty corner for the Scots. Jamie Golden unleashed a fantastic drag flick but it came off the crossbar.

The Scots seemed to be in control but once again gave the ball away in midfield and the South Africans equalised with a fast counter attack finished off by Nqobile Ntuli. However, their response was immediate and Walker’s superb reverse-stick strike put the Scots back in front on 43 minutes.

It was a belter of a match and the Scots had scored four goals in 11 minutes to end the third quarter with a 4-3 lead.

In a tense final quarter, defences were on top as both teams struggled to create chances until Rob Greaves won a penalty corner with 5 minutes remaining. McConnell’s shot was brilliantly saved, before the South Africans broke fast and earned their own penalty corner. Matthew Guise-Brown unleashed an unstoppable drag-flick and it was all square again at 4-4.

The South Africans took off their ‘keeper with three minutes to go as they chased a winner. And it paid off as yet another turnover led to Taine Paton knocking the ball past Alexander. It was heart-breaking for the gallant Scots who were four minutes from winning the match but ended up losing 5-4. It was a thrilling match with seven outstanding goals from open play.

Watching Scotland in any sport is never for the feint-hearted, but the men’s hockey team’s matches against New Zealand and South Africa has taken this to a new level. But it’s certainly entertaining – their fans have seen 31 goals in their three matches at the Games.

Their chances of reaching the semi-finals have gone but they will be aiming for a win against Pakistan in their last pool match to reach one of the higher ranked play-offs. 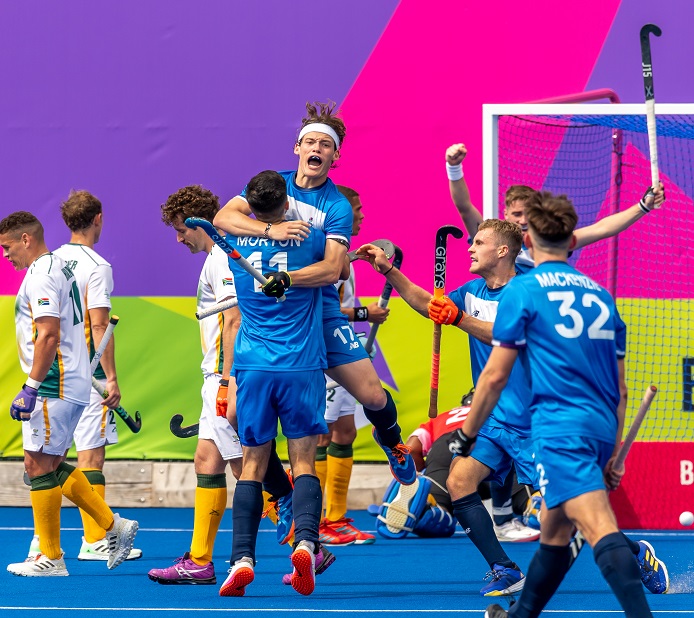