Scotland U21 Women beat Italy to win Gold in Alanya

Scotland were dominating possession in the early stages and looked comfortable in the match.

There was nearly an early goal for the Scots when a nice ball slipped into the D saw a turning shot slide past the left post.

Italy then took the lead from a penalty corner. It was struck well by Candela Carosso to put Scotland 1-0 behind.

Scotland had a golden opportunity to take the lead in the third quarter when a nice pass through the Italian defence found Georgia Jones with just the goalkeeper to beat, but her shot skimmed the post on its way past and Italy survived.

Jones again was involved as Scotland tried to break the Italian defence down, this time she prompted a good save by the goalkeeper to deny her the goal.

The Scots were pummelling the Italian goal with shots and it looked as if there could only be one winner.

They finally took the lead when Lunjika Nyirenda scored in the fourth quarter with a close range finish to make it 2-1 to Scotland.

Ruth Blaikie made it 3-1 for Scotland soon after. Good running into the D by Scotland found Blaikie in the right place at the right time to roll the ball home for a third goal.

Then to add extra sparkle to the victory it went 4-1 with Nyirenda scoring again when she slipped the ball past the goalkeeper to seal the victory.

The Scots had already secured promotion to A-Division, now they’ve secured a gold medal to go with it.

Scotland U21 Women’s Head Coach Neil Menzies said, “It’s been a good day all round! I’m so happy for the players, they played so well and deserved to win the tournament. It’s a great group we have here. They have a remarkable ability to keep to the plan but also find adjustments to what the opposition is doing. Their attitude is tremendous, even with a minute to go and leading 4-1 they were still working hard for each other and doing all the right things. The group is very together, and it’s very promising for the future.” 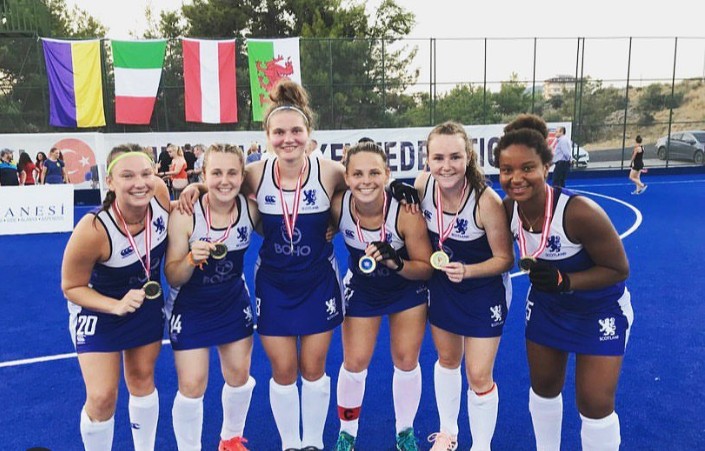