Scotland’s women hit eleven goals without reply against Kenya in their third match at the 2022 Commonwealth Games. On a glorious morning at the University of Birmingham Hockey and Squash Centre, the free-flowing Scots put on a fantastic display of attacking hockey.

Scotland started brightly and were ahead after only 3 minutes when Katie Robertson’s cross was superbly deflected by Fiona Burnet past the Kenyan ‘keeper.

Three minutes later, Scotland were awarded a penalty stroke when a Kenyan defender cleared the ball off the line with the back of her stick. Charlotte Watson stepped up to flick the ball into the top corner to make it 2-0.

Within a minute it was 3-0 when a fast-flowing move led to Jen Eadie tapping in Bronwyn Shields’ pass. The Scots were flying and earned three penalty corners in quick succession, but the Kenyan defence held strong.

The Tartan Hearts were stretching the game up both flanks and that led to two more quick goals. Katie Robertson’s ran along the right baseline and put the ball on a plate for Sarah Jamieson to make it 4-0. And then Sarah Robertson’s cross from the left set up Louise Campbell to tap into an empty net.

Right on quarter-time, good work by Eve Pearson won a penalty corner, which Amy Costello smashed home to make it 6-0 at the break.

Kenya made a strong start to the second quarter but the Scots’ defence calmly snuffed out any threat. Watson and Katie Robertson won two penalty corners, but both of Costello’s shots were blocked. The Scots were struggling to break down the Kenyan defence until Sarah Robertson’s cross was excellently trapped by Jamieson and Watson smashed the ball home to make it 7-0 at half-time.

The much-improved Kenyans began the second half strongly, bringing out two good saves from ‘keeper Nikki Cochrane. The Scots continued to threaten but were struggling to find a way past their opponents’ well-organised defence. Their pressure eventually paid off on 47 minutes when tenacious play by Jamieson led to her striking the ball home to make it 8-0.

More good pressure by the Scots led to two penalty corners won by Watson and Burnet but the shots from Costello and Eadie were well saved. However, right on the quarter time, another Scots penalty corner finally went in when Burnet deflected Costello’s strike into the net for the ninth goal.

The Scots were in no mood to ease off and won three penalty corners within the first minutes of the final quarter. The first two were well saved, but the third worked perfectly. A slick move saw injector Bronwyn Shields slip the ball inside the near post from Eadie’s corner to put the Scots into double-figures.

The Tartan Hearts were on fire, with Eadie controlling the midfield and Kenya down to nine players after two cards. From another penalty corner, the Robertsons combined to make it eleven, with Sarah setting up Katie to slide it home. Despite late pressure, there were no more goals and it finished 11-0.

It was a very impressive performance by the Scots who had 33 shots on goal. The result leaves Scotland level with Australia and New Zealand on six points, and a semi-final place up for grabs when they play the Hockeyroos on Wednesday. 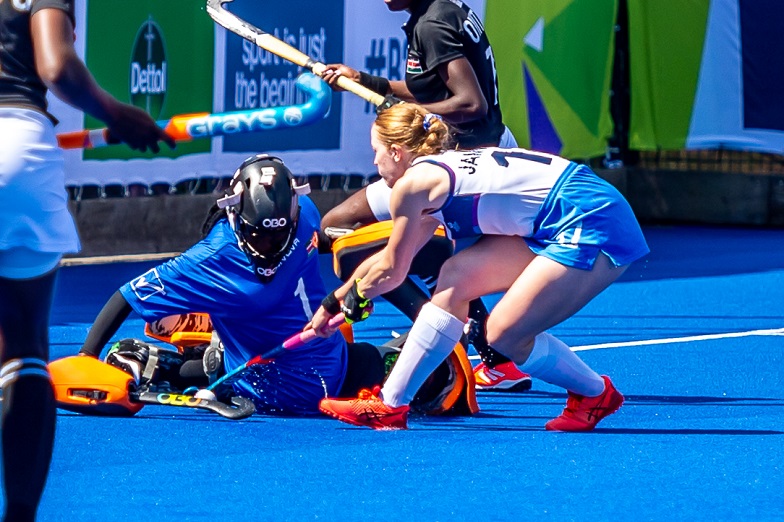