The Scotland U17 squads finished their weekend at the School Games with two more strong performances. The boys were runners-up and the girls finished third after winning their play-off.

After two good wins to top their pool, the boys went into their final against a strong Ulster team with great confidence. Olly Magowan gave the Scots a 1-0 lead in the first quarter before Ulster equalised after 20 minutes. However, they regained the lead when Max Bargeton scored to make it 2-1 at half-time. In exciting second half, Ulster equalised just before the Q3 break and then broke Scottish hearts with the winner just four minutes from time.

Head coach, David Bond was delighted with his squad’s performances and attitude. “The boys have demonstrated a huge progression in our relatively short time together as a group. They worked hard across the weekend in a professional manner. Whilst it was a shame to fall just short of the win in the final, there were lots of valuable learnings to take from the whole experience.”

The girls finished on a high with a win on penalties against England White in the 3rd/4th place play-off. In a very tight match, England led 1-0 at half-time before Neave Halliday scored a deserved equaliser just six minutes from time from a penalty corner.

In the penalty shoot-out, both teams missed their first attempts before Anna McWilliams and Ava Smith scored and Cara McAllister saved again to give the Scots a 2-1 lead. After Emma O’Neil kept out the next England penalty, Jennifer Veitch delivered in style to earn the Scots a 3-1 win.

Bill Robson, the Girls’ Head Coach, commented, “I was delighted with the performance from the girls. We had a difficult build-up to the tournament with very little preparation time, so to perform as we did was really encouraging. Credit to the whole squad for their hard work and diligence.”

Congratulations to both squads on their performances over the tournament. 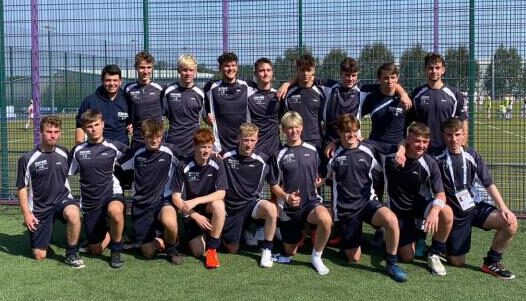