Scots on form for GB in Pro League

Home » News » Scots on form for GB in Pro League

Scots featured heavily in GB’s FIH Pro League matches over the weekend as the women clocked up two victories, and the men drew the first contest before losing the resulting shootout on Saturday, and earned a victory on Sunday.

Scotland’s Sarah Robertson continued her superb scoring run for GB with goals in both GB games against USA at the weekend. Alan Forsyth played his part in both matches over the weekend against Spain, winning his 50th GB cap in the process.

GB looked to make their mark early on in the game, winning a penalty corner inside the first few seconds. The home side continued to press but it took until the dying embers of the first corner for the deadlock to be broken as Lily Owsley pinched possession and supplied Izzy Petter for a very tidy finish.

Britain were on top against an inexperienced USA side, and a great run from Ellie Rayer on 25 minutes almost saw her double the advantage. USA forays into the D were rare, but Maddie Hinch had to stand firm to keep the American attack out in the 28th minute. And it proved to an important contribution as Britain then effectively put the game out of reach, Petter with a neat deflection from a well-worked routine; assisted by Grace Balsdon.

Early in the second half the confident Petter went close, firing just wide with a backhand effort after a mazy run inside the circle. And soon enough the third goal did arrive, Fiona Crackles doing very well to allow Sarah Robertson a clear sight of goal, the Scot converting from close range. Shona McCallin and Rayer were then denied by the busy Kelsey Bing in the USA goal. Mark Hager’s side were enjoying a dominant period and soon enough it was 4-0 as Anna Toman drilled home from a penalty corner.

A few minutes into the final quarter and it was 5-0; Robertson and Crackles combining well to give Rayer a simple chance from close range. The pressure continued to be poured onto the USA goal and Robertson was incredibly close to deflecting home from a corner in search of a sixth.

To their credit, USA battled gamely and Hinch saved well from Miranda Rigg before Kelsey Briddell got a consolation goal from a corner, lifting home nicely. And so it finished 5-1, a good afternoon’s work for Britain at Lee Valley Hockey and Tennis Centre. The two sides will now face off once more on Sunday for Great Britain’s final competitive match before Tokyo.

GB struck early to maintain the momentum from Saturday’s 5-1 win; Grace Balsdon rifling a penalty corner high past the goalkeeper in only the second minute. The pressure continued to mount on the visitors’ net, with Fiona Crackles denied midway through the period before again GB found a way through from a corner, Giselle Ansley the scorer this time on 14 minutes.

And service resumed once again early in the second quarter, Sarah Evans tucking home from close range at another corner. Set pieces were proving positive for the home side, and another Ansley strike almost produced a goal but Laura Unsworth’s rebound hit the post. With 20 shots on goal in the first half it was a dominant display on a blustery afternoon in east London.

GB were enjoying the vast majority of possession but to their credit USA were putting bodies in the way.

GB looked to add to the scoreline early in the fourth quarter but Jo Hunter was unable to get a touch on Ansley’s well-struck pass. Then a stoic USA side enjoyed a rare foray forward as Maddie Hinch saved from Danielle Grega. Soon Britain did have a fourth, Sarah Robertson producing a smart finish on the reverse from Anna Toman’s pass.

When the fifth goal came in the 52nd minute it was a real beauty from Jones; superbly guiding the deftest of touches past the USA keeper from a ranging pass by Hollie Pearne-Webb.

Spain found their range in front of goal very early on, Alvaro Iglesias pouncing at the back post in the sixth minute after a quickly-taken free hit. And just three minutes later Jose Basterra scored with a superb backhand finish; getting in down the left-hand side, evading a challenge before scoring into the corner with aplomb.

The visitors certainly came to London on the front foot and with a passionate game plan, and Great Britain had to work hard to get back into the game; Liam Ansell slamming home expertly from a penalty corner with six minutes of the first half remaining. Sam Ward was then denied by a good save from Quico Cortes as he too tried his luck from a penalty corner before the interval.

After the break Chris Griffiths had a sight of goal from a loose pass by Josep Romeu, but he was unable to test Cortes in the Spanish goal. Britain were striving in front of a handful of invited friends and family in the stands, and a super run from Zach Wallace gave the hosts a chance inside the D but Cortes was on hand. Right before the end of the quarter Adam Dixon and Griffiths combined well to release Ansell, but he was off target with a tough backhand chance.

Into the final quarter and Spain continued to carry a threat, Liam Sanford having to defend brilliantly at a penalty corner to keep the visitors at bay. Spain were certainly not resting on their laurels and both sides were pressing for another goal.

Inside the final three minutes Rupert Shipperley just couldn’t get to a low Henry Weir cross, but he was not to be denied in the last 30 seconds. Ames and Weir worked the ball nicely, and the latter’s fired cross was brilliantly turned home by Welshman Shipperley from close range.

So it was a point apiece from the 60 minutes, but it was Spain who took the extra point from the resulting shootout. With honours even after the first two efforts, a super save from Cortes to deny Alan Forsyth’s penalty stroke proved pivotal. With Forsyth and then Zach Wallace unable to convert their efforts, it was the Spaniards who took the bonus point 3-1.

Spain were fortunate not to be 1-0 down inside the first minute as Great Britain were awarded a penalty corner – if play had been allowed to continue then Sam Ward was in a great position to score. From the resulting corner, Rupert Shipperley was desperately close to a goal but pulled just wide from close range. Britain enjoyed most of the possession in the opening quarter but they still required Ollie Payne to make a smart stop from David Alegre late on. As the quarter ended Ward tried a snapshot but the Spanish ‘keeper Quico Cortes was equal to it.

Cortes was busy early in the second quarter as Tom Sorsby drove the ball into the D, palming away a deflected effort. Spain continued to pose a threat as well, but dragged their first corner of the game wide of Payne’s right-hand post. It was a pulsating game and Britain were showing passion and drive, getting a deserved opener when Will Calnan turned excellently to find Shipperley for a very good finish. Welshman Shipperley continues to show a very good eye for goal, and almost scored again moments later as he tried to direct Calnan’s backhand shot right on half time.

Into the second half and it continued to be an entertaining affair, encapsulated by a super second British goal; defender Liam Sanford finding Alan Forsyth with a wonderful pass, the number 7 then feeding Shipperley for a back post finish.

The final quarter was a rather feisty affair, with neither side backing out of challenges. Spain removed their goalkeeper with eight minutes to go, but Britain stood firm and took a deserved – and pleasing – victory at Lee Valley Hockey and Tennis Centre. 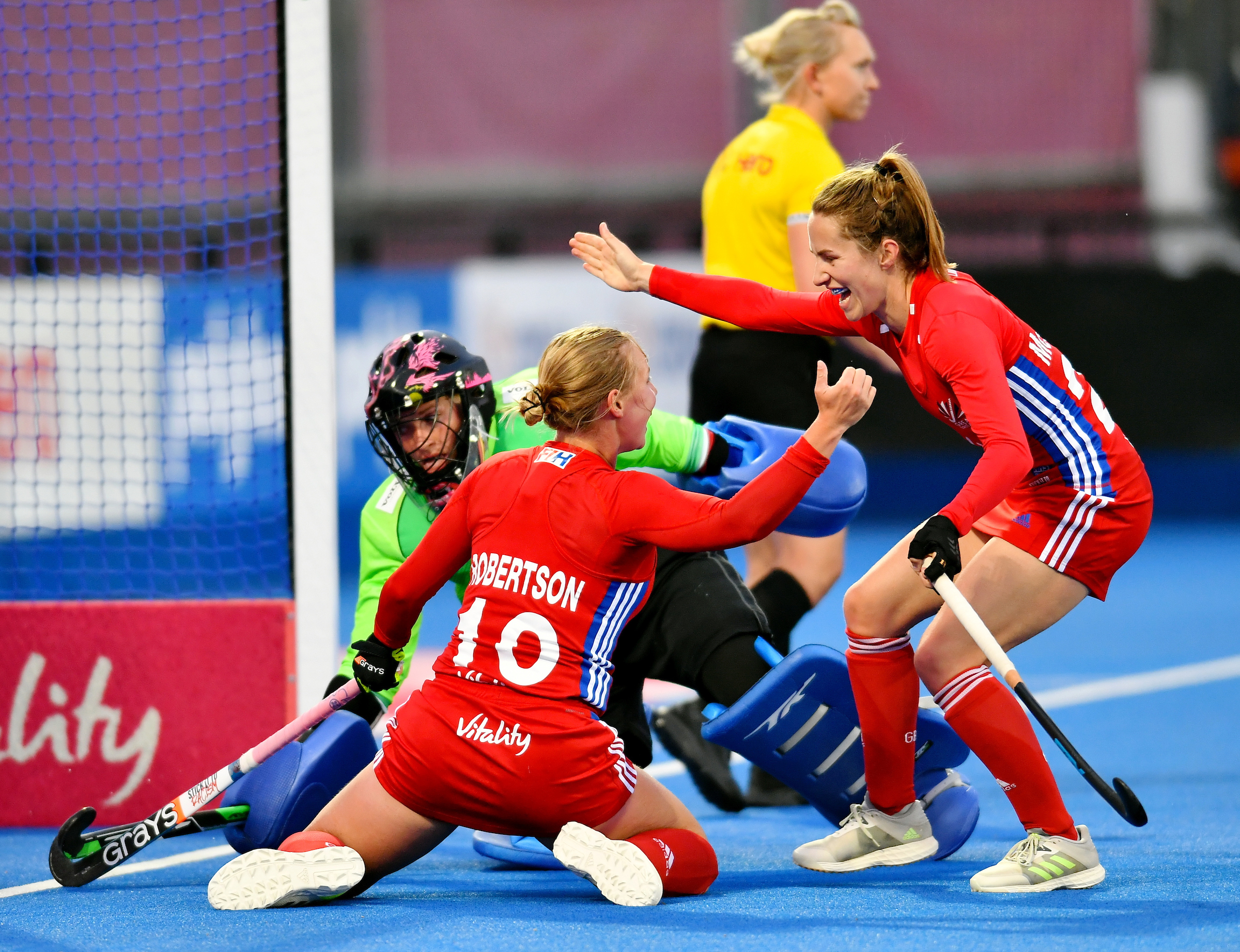