This weekend`s Scottish Cup Finals brings the curtain down on this season`s domestic campaign, on Saturday Grange take on Grove Menzieshill in the men`s competition while the following day sees the women`s ultimate stage with Edinburgh University playing Dundee Wanderers.

Grange are in search of the treble – the league and European play-offs are already in the bag – retaining the cup would complete the set.

The champions have been in devastating form recently. They completed the league campaign with only one defeat – ironically at the hands of the Taysiders in the final encounter – but took revenge in the final of the European play-off with a resounding 4-0 victory over the Dundonians.

In last weekend`s semi-final the Edinburgh side gave Western Wildcats an 8-3 defeat in a powerful display of attacking hockey. Grange do not rely on one or two lethal strikers, instead the goals flow from several members of the squad which makes it difficult to defend against.

Grove Menzieshill will always have confidence however. They certainly had a tough afternoon in the European play-offs and had a challenging time in the recent EuroHockey League, but this is their last chance to take some silverware from this season. Grove Menzieshill will be more than ready to take to the pitch for the Scottish Cup Final and disrupt Grange’s treble party plans.

The hope might be that the Tayside defence can keep Grange from scoring early goals, leaving the likes of Jamie and Cammie Golden, Albert Rowling, or Aidan McQuade from penalty corners, to bang in the goals. There will be top players in show from both sides and another classic final is promised.

The women`s Scottish Cup final could be a close affair, certainly champions Edinburgh University will be viewed by many as favourites, but Wanderers have finished the season in impressive form. And they have strikers in Heather Elder, Emily Dark and Charlotte Watson who can convert chances in the circle.

In contrast, Edinburgh University battled to overcome Watsonians in last weekend`s semi-final, certainly they won 2-0 in the end but it should have been much more considering all the second half pressure.

League results show how close the contests have been between the sides, the opening game in September on Tayside ended in a goalless draw. The return in Edinburgh also ended square, Amy Brodie and Hanna McKie were on target for the students while a double from Vikki Bunce was the reply.

Certainly Edinburgh University have dominated the domestic scene over the past five years or so, but recently Wildcats have exposed some frailties, culminating in their 1-0 victory in the European play-offs – so can Wanderers follow this up on Sunday?

The weekend is jam-packed full of cup final action with the Scottish Plate; District Cup and Plate; and Reserve Cup and Plate finals all taking place over the weekend.

On Saturday Highland and Dunfermline Carnegie will compete in the men’s Scottish Plate final. Dunfermline Carnegie return to the Glasgow National Hockey Centre after their recent Grand Finals appearance, missing out on promotion to National League 1. Highland of National League 3 are the opponents and will also be looking to take the opportunity to get their hands on some end-of-season silverware.

The Men’s Reserve Cup is an all Grange affair as the 3s take on the 4s on Pitch 1, while on Pitch 2 Western Wildcats 3s and Kelburne 4s play out the Reserve Plate final.

Sunday will see defending champions Orkney take to the pitch in the Women’s District Cup final as they face Ellon. In last season’s final Orkney ran out 4-0 winners against Edinburgh University 4s, while Ellon will look to replicate their District Plate win last season with victory in the Cup.

Glasgow University will take on Kelburne in the Scottish Plate final in what promises to be an excellent final, and Clydesdale Western 4s will take on Glasgow Academicals in the District Plate final to get the day’s action underway.

The curtain falls on the Scottish Hockey domestic season at one of the highlights of Scotland’s sporting calendar – the Scottish Cup Finals!

Final tickets on sale now! Use these ticket links in the pages below to donate 50% of the ticket value to your club 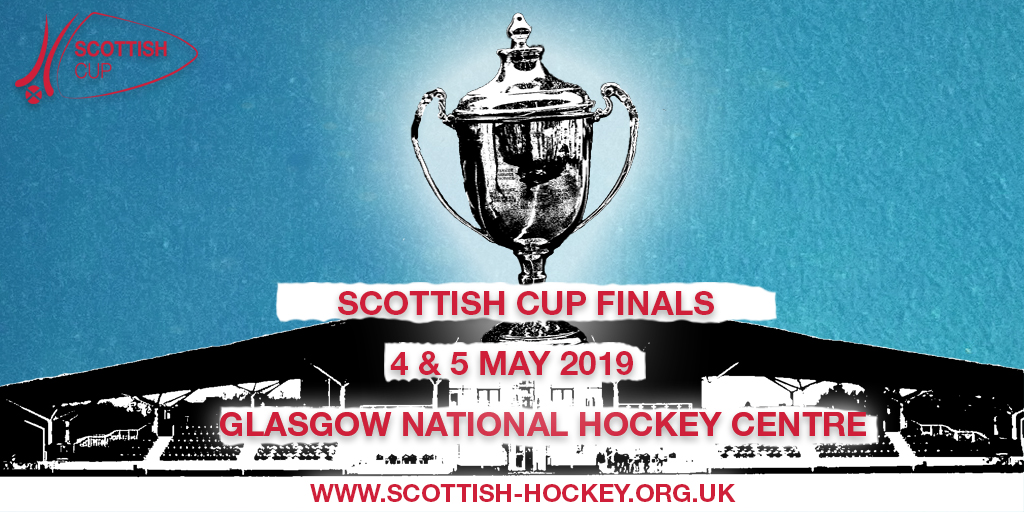