The Senior Boys’ Cup final served up an absolute cracker in the day’s main event and it was Loretto School who took the trophy home after a close 2-1 win over Stewart’s Melville College.

Earlier in the day Renfrewshire was victorious in the Aspire Girls’ Cup final with a competitive 1-0 win over Perth Schools’. Glasgow Academy emerged victorious after a 2-1 win over Robert Gordon’s College in a super Senior Girls’ Plate final.

The Senior Boys’ Cup final served up an absolute cracker and it was Loretto School who took the trophy home after a close 2-1 win over Stewart’s Melville College.

The atmosphere was electric as the match got underway and it was a very even start to the contest.

Cameron Sword looked composed in the middle of the pitch for Loretto while Jamie Croll looked the part for Stewart’s Melville College.

While both sides probed no clear opportunities presented themselves.

The game’s first opportunity went to Stewart’s Melville and a fizzed low penalty corner strike was cleared off the line at speed.

Henry Thomas for Loretto was denied a goal when his instinctive shot was well saved and the danger cleared.

Loretto threatened with a couple of penalty corners late in the first half but couldn’t find the net to capitalise.

Then Loretto opened the scoring with a sublime Charlie Jack drag flick into the left corner. 1-0.

Straight away, Stewart Melville’s Jamie Croll was denied twice when his drag flick was well saved at the left bottom corner, and then the bottom right.

Then came the equaliser, a flick for Stewart’s Melville College was dispatched into the bottom left corner by Cameron Ede – 1-1. The keeper got a hand to it but couldn’t keep it out and the scores were level.

A short time later another flick was awarded to Stewart’s Melville College and this time Ede was denied by a tremendous save at the bottom left corner.

Loretto then went 2-1 ahead with another Charlie Jack drag flick, a carbon copy of his first, rifled into the bottom corner with four minutes to play.

A late Stewart’s Melville College push couldn’t find another equaliser and Loretto held on to be crowned champions in Glasgow.

Renfrewshire was victorious in the Aspire Girls’ Cup final with a competitive 1-0 win over Perth Schools’.

The game got off to a great start and it was Renfrewshire who took the lead. A lovely solo run from Morven McEwan into the circle saw her roll the ball into goal to make it Perth 0-1 Renfrewshire.

Soon after a missed penalty corner from Renfrewshire came close to a second before Perth Schools tore forward forcing the Renfrewshire keeper to make an excellent save to keep them in the lead.

With two minutes to go in the first half another chance fell for Renfrewshire Schools – one-on-one with the keeper, excellent save and defender clears.

The start of the second half saw Perth Schools’ start strong with lots of possession in the opposition 22.

An error from a Perth defender through a misplaced pass across the D saw the ball land on a Renfrewshire stick, and forced the keeper into another great save.

Perth Schools began piling on the pressure as the match progressed and prompted some good goalkeeping and defending to keep Perth out. It couldn’t change the result and Renfrewshire took the victory in a great win.

A strong ball in to the circle saw a narrow miss in front of goal as Perth searched for the opener.

They came close again with a flick at the top of D that crashed off the post. It led to another penalty corner for Perth in quick succession, this time the keeper came too far off his line and the ball was chipped into the net. 1-0.

The penalty corners kept coming for Perth Schools and one effort zipped low past the bottom left post in another near miss.

Perthshire very nearly doubled their lead after a slick attack down the right found the forward line charging right in front of goal, but they all failed to make a solid connection and the ball evaded the post.

The second goal did come soon enough and the ball was rattled home with a low shot into the bottom left corner for 2-0.

It went to 3-0 just before half time with a wicked low shot into the bottom right corner.

Keir Robb almost pulled one back for Grove Academy but he couldn’t connect after a lovely near post run.

Robb again came close after twisting and turning in the D but his powerful shot rattled the crossbar and bounced clear.

Perth Schools added another with a few minutes remaining and it came through a far post tap-in after a quick attack down the right.

Glasgow Academy started the contest on the front foot attacking down the right and creating openings.

It was Glasgow Academy who took the lead when Ava Smith opened the scoring with a delightful strike on the reverse stick into the top corner. 1-0.

The longer the game went on the more Robert Gordon’s came into the contest. A slick penalty corner exchange was zipped low against the back board by Katy McLeod to make it 1-1.

McLead was denied another with a power penalty corner effort from the top of the D by a solid diving save.

Up the other end of the pitch and Glasgow Academy’s Aisha Saini was denied a goal by a great diving save low to the left.

Saini wouldn’t be denied for long and added her name to the score sheet with a goal through the goalkeeper’s legs for 2-1.

The first minute brought the first goal of the contest and it went to Bellahouston/GSOS from a well-executed penalty corner routine.

There was nearly another soon after when Cameron Moran pounced on an opportunity after a defensive lapse but found the goalkeeper equal to the high and powerful effort.

A double save denied Bellahouston/GSOS again as they went pressing for another goal – the second was from point-blank range with the goal beckoning.

Then a Euan Cowan drag flick whizzed past the top right corner from a Bellahouston penalty corner.

Then Glenalmond struck right before half time when Cameron McNeil’s clinical finish into the bottom left corner to equalise. 1-1.

Scott Menzies deflected a lovely penalty corner routine into the net to make it 2-1 to Bellahouston/GSOS right after the restart.

Moments later Ethan Robertson made it 3-1 when he prodded the ball home from close range.

A flick was awarded to Bellahouston/GSOS and Cowan dispatched it into the bottom right corner for 4-1.

Almost immediately Cameron Moran thundered a low shot against the backboard to make it 5-1.

Toby Adamson very nearly pulled one back for Glenalmond when he got on the end of a blasted pass across the face of the goal, but ball went just wide.

With a couple of minutes left to play a sensational volley strike by Josh Davey nearly burst the net as Glenalmond pulled it back to 5-2.

George Watson’s started strong with lots of early possession, and came close to opening the scoring with a couple of penalty corner efforts.

Some strong midfield play saw a dangerous Watson’s break but Maddie Boyes in goal for Heriot’s made a bold run and cleared from the edge of the D.

Heriot’s first break into the opposition D saw them go one-on-one with keeper but an excellent save kept it goalless.

Heriot’s found their stride with lots of possession in the opposition 22’ and created some close shots on goal.

The first pass to start second half saw Watson’s break into the D and beautiful strike brought the first goal of the game. 1-0.

The contest tore from end-to-end play and some lovely play down the left wing resulted in a pass and lovely stick-work in the D for Heriots to level the score. 1-1

There were nine minutes left on the clock when Heriot’s were awarded a penalty corner, and the resulting strike from the top of the D found the net to make it 2-1.

The final minutes were very well contested but Heriot’s held on to win 2- 1. 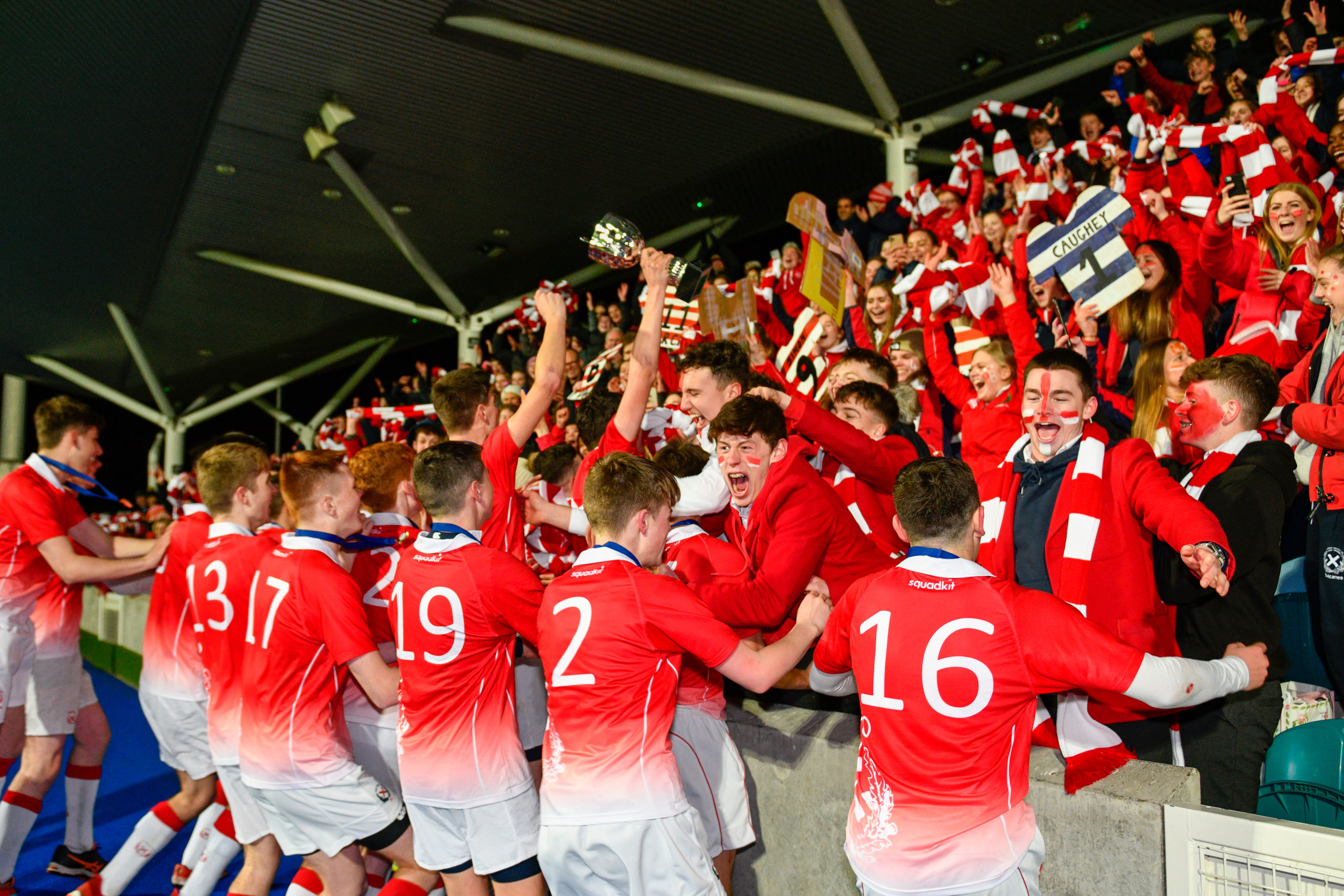