Sensational Scotland on top form against Canada in indoor series

Scotland men were in sensational form with a high-scoring victory and dramatic comeback in their two games against Canada at Bells Sports Centre. It was the first two in their three-match indoor series. The opening contest was a dramatic 5-5 draw, with Scotland fighting back from 4-0 down, before the second contest that saw Scotland soar to a sublime 10-2 victory.

The first match between the two was something of a classic. An exciting contest saw Scotland battle back from 4-0 down to draw 5-5 at Bells Sports Centre.

Scotland get match underway and looked sharp. It was the Scots who fashioned the first chance of the match; a great turn and shot by Dan Coultas, after nice play by Stephen Dick, was saved before Jamie Golden struck the rebound, which was well saved again on the ground.

Canada then took the lead after a slick break down the right found Shue Rjaraman, who slipped a back hand shot low against the backboard for 1-0. The goal against was against the run of play, Scotland had started well.

The advantage for Canada was widened after a penalty corner by Macall Texeira somehow ended up in the back of the net via a couple of deflections and the crossbar. 2-0.

It went to 3-0 when Lyle Fernandez for Canada cut in from the left and managed to squeeze the ball home at the near post. 3-0.

Coultas was very unlucky on the turn early in Q2; his shot nearly slid under the keeper but was eventually saved. Then Coultas would be denied again from a Scotland penalty corner – his effort blocked well.

Up the other end and Teixeyund Devoun sent a lovely strike from a penalty corner in to the bottom left corner made it 4-0 for Canada.

Scotland continued to attack and Cammy Golden was very unlucky; he pounced on a mistake but flicked his effort over the bar. Moments later Andrew McConnell had an effort well saved from close range, before McConnell again was denied by a solid save from his shot on the turn in front of goal.

Then another Coultas penalty corner effort was denied by an exceptional diving save right on the half time buzzer.

Despite the effort the ball just wouldn’t go in for Scotland.

Finally Scotland got the goal they deserved. Elliott Sandison scored for Scotland – a very quick and measured attack down the left found him diving in to finish. 4-1.

The goal energised Scotland and soon after they had another. Jamie Golden tapped home at the far post as Scotland thundered back into the match 4-2.

The Scots went searching for a third as McConnell was denied after his twisting effort was saved; and then Scotland had a penalty corner zip just past the right post.

Early in the final quarter Canada found the bottom left corner through Ken Peiriera to make it 5-2.

Still, Scotland kept fighting. Dick was denied at near post before Coultas smashed a drag flick off the bar.

The Scots dragged themselves back into the contest when Jamie Golden found the bottom right corner from the penalty spot for 5-3.

Scotland hammered at the Canadian door; some brilliant play on the press but Jamie Golden couldn’t find the finish with the goal begging.

Then Cammy Golden slotted the ball home with three minutes remaining for 5-4. There was a strong feeling that there was a chance of an equaliser.

Then it came. With one second left to play Scotland equalised. A full throttle but calculated attack down the left found Joe McConnell arriving at the far post to level the score right before full time. It was a dramatic end to a fantastic match to kick start the three-match series.

The second match of the Scotland v Canada indoor series at Bells Sports Centre saw Scotland on superb form as they won 10-2 in a great performance.

Canada started the contest and quickly the Scots were on them. They won the ball, broke down the left and Dan Coultas picked out Jamie Golden arriving at the far post to make it 1-0 for Scotland.

It was very nearly two nil after some nice individual play by Gordon Amour but his shot went just wide.

Next, Jamie Golden nearly scored his second of the match but his deflection looped over the bar.

The second goal came soon enough for Scotland courtesy of a power drag flick by Coultas, thundering against the backboard. 2-0.

Scotland were cutting the Canadians open at will as the quarter progressed and had opportunities for a third goal.

The third goal did come for Scotland seconds before the end of first quarter buzzer, Andy McConnell took the ball, turned and slotted it low into the far corner for 3-0.

Scotland picked up where they left off in the second quarter. Jamie Golden powered down the right and slammed the ball into the back of the net for 4-0 to Scotland.

Cammy Golden then got his name on the scoresheet when he slammed the ball into the bottom right corner from a penalty corner for 5-0.

Scotland went a man down after a yellow card for Sean Stewart but it didn’t seem to halt their progress. Coultas made it 6-0 early in the third quarter, the goalkeeper couldn’t keep the powerful shot out.

It went 7-0 after some mesmeric skill by Stephen Dick to spin and flick the ball into the top left corner, leaving the goalkeeper with no chance.

Canada pulled one back with a delightful flick into the roof of the net to pull it back to 7-1.

The seven goal advantage was restored when Cammy Golden powered the ball against the backboard from a penalty corner to make it 8-1.

Coultas made it 9-1 early in the final quarter with an unstoppable drag flick off the crossbar and in, bagging his hat-trick in the process. Coultas struck again soon after his third to make it 10-1 with a close range finish, and give Scotland double figures.

The Canadians struck a consolation right at the end but the match belonged to Scotland with the final meeting scheduled for tomorrow at 5:45pm in Bells. 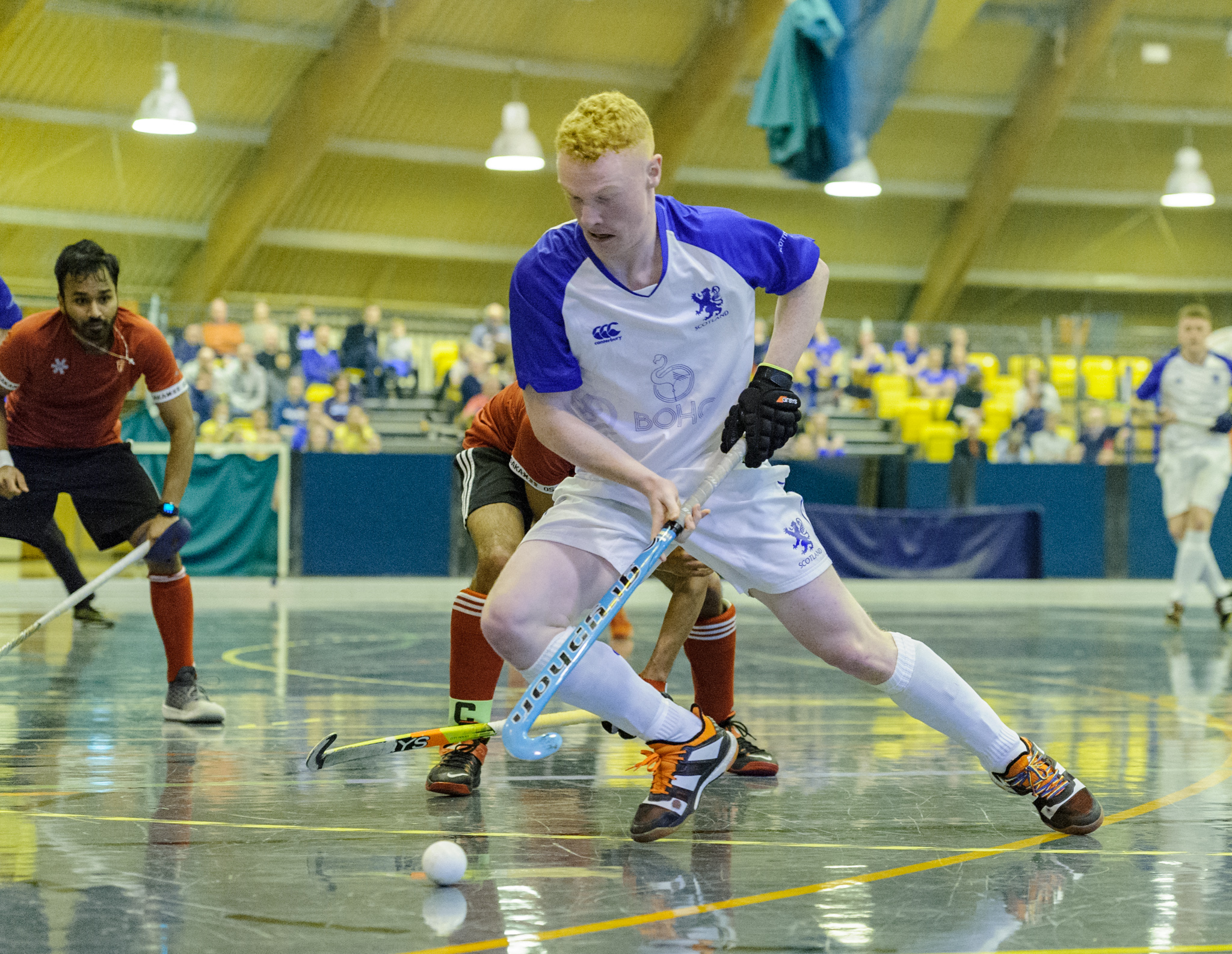