Scotland’s Men started their 2022 Commonwealth Games campaign with an extraordinary 5-5 draw against New Zealand at the University of Birmingham Hockey and Squash Centre.

In a classic game of two halves, Scotland’s lethal finishing saw them lead 5-1 at half time before the Black Sticks came roaring back with four goals in eight minutes to claim a share of the points.

It all started quietly until Scotland took the lead after 6 minutes when Rob Harwood scored from Michael Bremner’s excellent pass into the ‘D’. 2 minutes later it was almost 2-0 when Harwood fed Andy McConnell, whose shot went inches wide.

A scintillating display of attacking from the Scots in the second quarter began with McConnell winning possession in his own half and setting up a fast break on the right. The ball reached Jamie Golden who set up Callum Mackenzie to calmly slot the ball into the corner. It was a superb team goal to put the Scots 2-0 up.

After only 20 minutes, it was 3-0. Despite lying on the ground, Struan Walker managed to set up Jamie Golden who flicked the ball past the defender to extend the Scots’ lead.

A minute later Walker thought he’d scored when his own shot cannoned back off the post and he knocked home the rebound but it was disallowed on video referral. But it wasn’t long before the Scots made it four from their first penalty corner. Cammy Golden’s accurate drag flick from Duncan Riddell’s injection was too strong for the ‘keeper.

Within two minutes, New Zealand had reduced the deficit when Kane Russell scored from a penalty corner. However, the Scots went straight on the attack, and McConnell did well to win a penalty corner. This time, Jamie Golden was on target with an excellent drag flick from Forsyth’s injection to make it five.

The Scots supporters couldn’t believe what they were seeing with their team leading 5-1 at half-time.

Unsurprisingly, the wounded Kiwis came roaring back in the third quarter and ‘keeper Tommy Alexander made a series of excellent saves. However, they finally found a way through when Hayden Phillips scored from a penalty corner to make it 5-2.

The final quarter started with New Zealand withdrawing their ‘keeper to play with 11 outfield players and the gamble paid off. They quickly reduced the deficit from a penalty corner from Jake Smith before Hugo Inglis made it 5-4 from another penalty corner in the 50th minute. And a minute later Sam Hiha squared the game at 5-5 with 10 minutes left. Incredible drama.

Both sides had chances to win it, with Alexander making a double save and New Zealand so nearly scoring from a late penalty corner.  However, the Scots survived and the crowd could draw breath at the final whistle.

The match marked the 200th cap (Scotland and GB) for captain, Alan Forsyth who paid tribute to his team-mates and the supporters. “We have to take great pride in that first half performance against such a highly ranked team. It was a great atmosphere and we could hear the fans from the first minute to the end of the game.”

It was an incredible effort by Derek Forsyth’s squad in an extraordinary match, and they go again on Sunday against Australia. 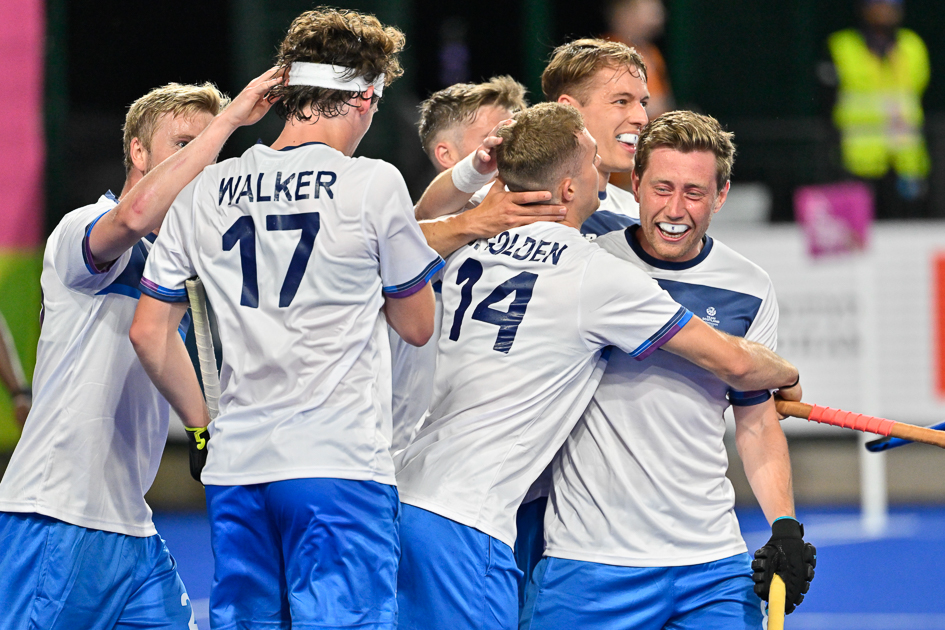