Watsonians women do the double with Scottish Cup success

Watsonians won the women’s Scottish Cup in an incredible day of Scottish Cup action at Peffermill. There were also victories for Edinburgh Cala; Orney and Edinburgh University 4s.

The game blazed into action with both sides playing at tempo, and it was Edinburgh University who created the first opportunities through back-to-back penalty corners, but the Watsonian defence was resolute and dealt with the danger well.

Then a goalmouth scramble, with Louise Campbell in the mix, resulted in another penalty corner for University, but again the defence was solid and cleared the danger.

Amy Costello’s distribution from the back for University was exceptional and allowed the students to force Watsonians back. But Sarah Jamieson pounced in the circle for Watsonians as the quarter end approached but a good blocked denied the goal.

Watsonians enjoyed good possession in the second quarter with Katherine Holdgate having influence.

Then came a moment of magic. Some individual skill saw Watsonians take the lead right on half time with a rocket into the roof of the net by Emily Dark. Dark won the ball deep in her own half and burst forward powerfully then unleashed a thunder bolt to make it 1-0.

The third quarter saw both teams battle hard for control of the match but it was the students who finished the quarter on the front foot. A succession of excellent saves by Lucy Camlin in goal for Watsonians kept her side in front.

Edinburgh University came out firing on all cylinders for the final quarter in the hunt for an equaliser, and with six minutes remaining they took off their goalkeeper in a final push.

Costello almost found the net from a penalty corner, weaving through the Watsonian defence, but Camlin was equal to the attack again. The students couldn’t find their equaliser and Watsonians held on to be crowned Scottish Cup champions.

It took a dramatic shootout to separate Edinburgh University 2s and Edinburgh Cala in the Women’s Scottish Plate final, but it went the way of Cala in a 3-1 penalties victory after a 2-2 draw at full time.

The game exploded into action as Gabby House opened the scoring to give Edinburgh University 2s a 1-0 lead. A penalty corner routine was converted by House to give the students the early advantage.

The game soon settled with both teams connecting well to move the ball around the pitch.

Then came an equaliser for Edinburgh Cala with a lovely finish by Hannah Milligan to tap the ball past the keeper and make it 1-1.

In the second quarter Edinburgh University 2s went back in front when Eve Downie made it 2-1 with a far post finish.

Early in the second half Cala struck back and Susan Rome knocked home the equaliser for 2-2.

In the closing stages of the third quarter Cala had a succession of penalty corners but Edinburgh University held out to get the scores level.

Edinburgh University 2s began to take control in the final quarter and peppered the Cala circle with searching passes.

House very nearly bagged the winner at a penalty corner routine where she arrived at the far post, but couldn’t connect to finish.

The final whistle blew and the contest ended 2-2 leading us to a shootout to decide the Women’s Scottish Plate.

The most tense of finales saw Edinburgh Cala win the Women’s Scottish Plate 3-1 on penalties.

Orkney retained their status as Women’s District Cup champions in a 3-1 victory over Edinburgh Cala 3s at Peffermill.

There was an early goal for Orkney when the ball was swept home by the captain, Inga Kemp, to make it 1-0 in the first few minutes.

Following the goal the opening quarter was a tactical affair with both sides working hard to cancel each other out, but a second goal would come soon enough.

Claire Irvine doubled Orkney’s advantage at the end of the opening quarter with a far post tap-in to make it 2-0.

In the second quarter Irvine bagged her second of the match to put Orkney 3-0 ahead by finishing off a lovely team move with a hard low finish.

Orkney started the second half well and probed the Cala defence with searching passes, but weren’t able to make any vital connections to finish off their attacks.

Then right at the end of the third quarter Emma Stirling Hammered the ball home to score for Cala. It was a great finish to pull the score back to 3-1.

Hannah Cromarty thought she’s added a fourth for Orkney in the final quarter but her drag flick was deflected wide by a defender.

Cala took off their goalkeeper as the minutes counted down in a final big push but the Orkney defence was strong and retained the District Cup with a 3-1 win.

Edinburgh University 4s started the game with a good press but the Hillhead 3s defence defended the circle well and negated any early threat.

Eventually the Edinburgh students unlocked the Hillhead defence and a nice attack down the right saw Katie Charles net on the rebound to make it 1-0.

An excellent attack down the right by Kirti Mehta saw the ball whizz across the face of the goal but evade all attacking sticks on the line.

Early in the second quarter Hillhead struck an equaliser. A penalty corner routine saw the ball bounce its way to Phoebe Haldane who struck it low to make it 1-1.

University came so close to striking a second but Fiona Youngman denied them with a superb block on the line.

It felt like a second goal for the students was coming and when Hannah Aubrey powered into Hillhead’s circle the ball was destined for the bottom left corner. 2-1.

Very soon after the second university struck a third. A penalty flick was awarded and Darcy McDermott stepped up to dispatch the ball into the bottom left corner for 3-1. 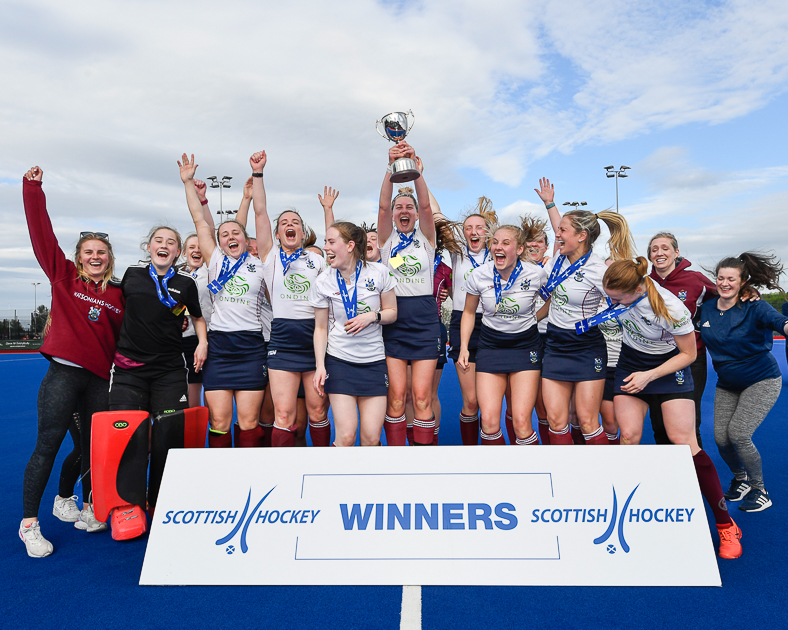