The men’s Scottish Cup was lifted by Western Wildcats to give them a tremendous treble and cap off a historic season for the club. FMGM Monarchs won an incredible contest with Perthshire 6-4 to win the Men’s Scottish Plate; Edinburgh University 2s and 3s both lifted silverware in a great day for the club; while Hillhead 4s and Inverleith 2s took home trophies in a sensational day of cup final hockey at Peffermill.

Western Wildcats completed their historic treble with a 6-0 victory over Hillhead in the men’s Scottish Cup final at Peffermill.

It was a day of history as Hillhead took to the pitch for their first ever Scottish Cup final. It was a competitive and even opening five minutes of the contest with both sides battling hard for possession.

Western Wildcats began to turn the screw and took the lead on a counter attack when Fraser Calder slammed the ball low into the corner of the net. 1-0.

Then Western Wildcats struck a second from a low and powerful Fraser Moran penalty corner right at the end of the opening quarter.

An Andy McConnell drag flick was well saved early in the second quarter as Western went on the hunt for a third.

The third goal came soon enough and it was Johnny Christie who made it 3-0 with an excellent striker’s finish, pouncing on a loose ball and smashing it home from close range.

Hillhead came out strong in the second half and fashioned a couple of chances early doors. A goalmouth scramble led to a penalty corner but the Western defence was solid and defended well.

Western’s pressure returned and McConnell went on a sensational solo run, weaving in and out the Hillhead defence, but his cut back for Rob Harwood was well blocked.

Then a phenomenal save denied Harwood from point blank range as Western searched for a fourth.

As the contest neared its conclusion Callum Duke scored against his old club with a tap in before Adam McKenzie made it 5-0 from close range.

Western Wildcats went 6-0 ahead in the closing stages with a lovely McConnell drag flick to put a cherry on top of a treble winning season.

The Men’s Scottish Plate final arguably produced the game of the day and the trophy was lifted by FMGM Monarchs after a sensational 6-4 win over Perthshire.

Early in the contest the Perthshire keeper was called into action and a top save denied an early strike.

Then came the opener through a penalty corner to Monarchs which saw Callum Boag covert to make it 1-0.

Perthshire struck right back and a goal by Michael Robertson at the end of the first quarter made it 1-1.

A penalty corner to Monarchs in the second quarter resulted in a goal for Phil Nolan, which was quickly followed up by a goal from Andrew McQueen to make it 3-1 to Monarchs at half time.

Michael Robertson pulled it back to 3-2 when he scored for Perthshire through a lovely deflection from a penalty corner.

Perthshire’s fightback continued when Scott Turkington forced the ball home with a low shot under the goalkeeper to equalise. 3-3.

Just a few minutes later Boag restored Monarchs’ lead from a low penalty corner to make it 4-3 right at the end of the third quarter.

As the final quarter started an improvised finish by Nolan put Monarchs 5-3 ahead.

Perthshire just wouldn’t go away and Robertson struck again with a powerful low shot against the backboard to pull it back to 5-4.

A late assault by Perthshire saw them come close but unable to land the killer blow; they took off their goalkeeper for one last attack, but Monarchs took them on the counter attack and struck a sixth to finish the game in style.

The Men’s District Cup was lifted by Edinburgh University 2s after a superb 3-0 victory over Western Wildcats 2s at Peffermill.

A penalty corner in the opening quarter to Edinburgh University brought a great initial save from first runner, and then another fantastic stop to keep the students out.

Excellent goalkeeping was a theme for Western’s early performance and before long a lovely lifted shot from Edinburgh University was saved brilliantly again.

A goal for Edinburgh University came soon enough and Jack Cahalin found the net after a slick long corner move to make it 1-0.

The second quarter brought a brilliant goal Edinburgh University goal by Archie Trevor, when he latched on a great pass to finish across the goalkeeper.

At the end of the third quarter it went to 3-0 after a good hit into the circle from the left side.

In the end Edinburgh University 2s clocked up a superb 3-0 win to lift the Men’s District Cup.

The Men’s Reserve Cup belongs to Edinburgh University 3s this season after they defeated Watsonians 3s 2-1 at Peffermill.

The opening goal came in the first quarter when a penalty corner to the Edinburgh University saw a lovely left slip pass find Harry Heap who found the net to make it 1-0.

Another penalty corner to the Edinburgh students was well defended by Watsonians as the first quarter ended 1-0 to Edinburgh University.

A succession of penalty corners to Watsonians in the second quarter were well defended and the half ended 1-0.

In the third quarter a penalty corner to Edinburgh University brought a goal by Louis Needham to make it 2-0, leaving the keeper with no chance.

A defensive error should have gifted Watsonians a goal back but they couldn’t capitalise with just the keeper to beat.

Watsonians did get a goal back through a lovely penalty corner routine that saw a long drag from the top D and deflection for 2-1.

Hillhead 4s were victorious in the Men’s Reserve Plate final with a tight 1-0 win over Glasgow University 3s at Peffermill.

A very even opening quarter had neither side taking control in a midfield battle with some feisty challenges.

Finlay Humberstone nearly scored for Glasgow University when he stole the ball and ran through on goal, but his shot zipped wide of the goal.

Then Alex Blood fizzed a low effort across the face of the goal for the students, but to no avail.

The longer the game went on the more Glasgow University enjoyed the ball and fashioned some openings, but they couldn’t find the back of the net.

Early in the second half an excellent low save denied Glasgow University the lead and the stalemate continued.

Finally Hillhead opened the scoring in the final quarter with a shot on the turn by Dan Ebbatson to make it 1-0.

A late push for an equaliser was well weathered by Hillhead who held on to lift the trophy at Peffermill.

Inverleith 2s were victorious in a 2-1 win over Glasgow Univerity 2s in the Men’s District Plate final at Peffermill.

The first big chance of the final went to Glasgow University with a lovely shot on the turn, but it went just wide of the mark.

The opener wasn’t far away and Inverleith 2s took the lead when Nicholas Temperley struck on the turn to make it 1-0.

Glasgow University began to play their way back into the contest and came close with a corner routine that deflected over the bar.

Then James Dick was denied by a sensational double save by Charlie Posnett to keep Inverleith in front.

Euan Leask had the ball in the net for Glasgow University but the strike was ruled out for an infringement.

Posnett then pulled off another tremendous save to block a far post tap in. The keeper was playing a blinder.

The Glasgow University equaliser came in the second half from the penalty spot. Harry Kneale flicked the ball into the bottom right corner for 1-1.

The contest raged on and Inverleith 2s went back in front through a Glenn Healy bullet into the back of the net for 2-1.

Rob Brown nearly bagged a third for Inverleith in the final quarter but his shot on the turn went wide of the right post.

A third goal wasn’t required in the end and Inverleith 2s were crowned Men’s District Plate champions in Edinburgh. 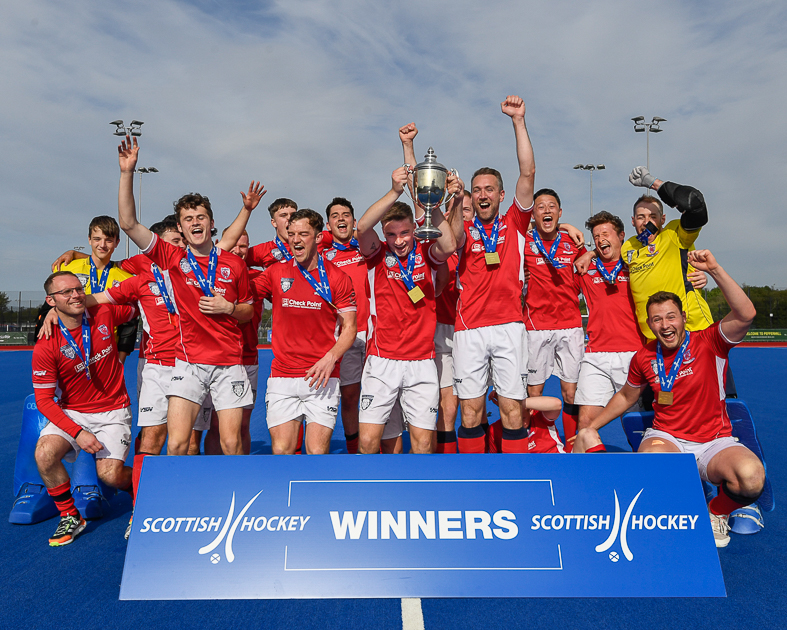