Win for Germany on Scotland men’s return to EuroHockey Championships

Scotland men were defeated by eight time European champions Germany 9-0 on the Blue Sticks’ return to the Belfius EuroHockey Championships. It was a tough match as the Scots find their feet at the elite level in Antwerp and now look forward to a match tomorrow against Ireland in Pool B of the tournament.

It was a good start by Germany, ranked seventh in the World, from the first whistle and they created some clear chances early in the contest. Ferdinand Weinke had a great opportunity with a clean shot at goal but his effort fizzed past the top left corner of the net.

Germany took the lead through a clinical finish by Timm Herzbruch. A slight mis-trap in the Scotland defence was punished by the dangerous Herzbruch who absolutely smashed it low past Tommy Alexander to make it Germany 1-0 Scotland. Quickly Germany went 2-0 ahead when Niklas Wellen fired a powerful low shot across Alexander to score.

Scotland began to play their way back into the match; an excellent run and piece of skill by Lee Morton got Scotland up the pitch as they tried to create a chance for a goal. Morton was connecting well with Cammy Golden but Germany defended well and kept the Scots out.

Germany piled on the pressure in the second quarter but Scotland managed to hold them off with Alexander producing some excellent saves. However, Mats Grambusch soon made it 3-0 for Germany when a penalty corner rebound fell kindly for Grambusch who finished well. Then an absolutely delightful finish by Florian Fuchs made it 4-0 at half time. The Germans attacked down the right, Alexander made a solid initial save but Fuchs was on hand to dink it over the advancing keeper into the net.

Shortly after half time Germany scored a fifth and it was Wellen who struck his second goal of the match with a slick finish on the turn.

Some good play on the right by Tim Atkins won Scotland their first penalty corner but they weren’t able to capitalise as Germany cleared the danger.

Minutes later a Germany penalty corner was finished beautifully by Herzbruch, his strike finding the net off the post for 6-0.

In the final quarter Herzbruch bagged his hat-trick when he deflected a powerful ball towards goal high into the net for 7-0. Then a tap-in for Christopher Ruhr made it 8-0. Another penalty corner strike made it 9-0; Martin Haner with the goal.

Scotland Head Coach Derek Forsyth said, “We were quite nervous in the first half and took a bit of time to get used to this level of play. We’re not used to playing at this level very often so we need to get up to speed, and games will help that.

“We showed at times that we can cause teams problems at this level, but we’ll need to concentrate on executing the things we can control – keeping possession better and playing how we know we can play. We’ll be improved for the next match.” 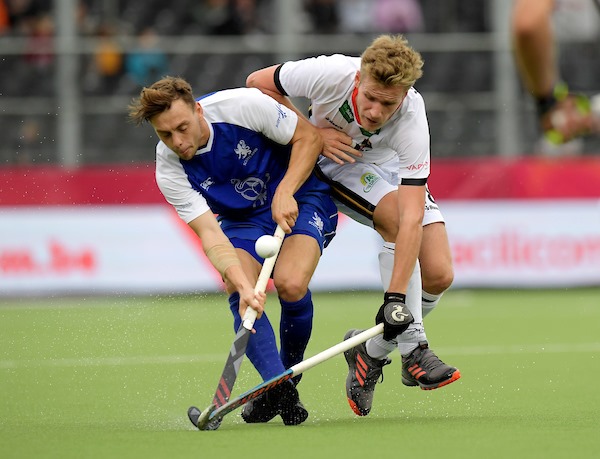