May is Walking Month and Hamish the Hockey Hippo will do a ‘virtual walk’ from our southernmost club, Berwick Hockey Club, to our northernmost club, Shetland, while sharing stories of clubs’ Club Pledge activities along the way.

Starting from the Borders and heading north, each day we’ll publish an article on the website outlining the Club Pledge activity taking place in a region of Scotland. We’ll also post further material on social media that takes a closer look at some of the things clubs have done.

Each day there will also be a special guest walker (from the region we’ll be covering that day) who we’ll profile. 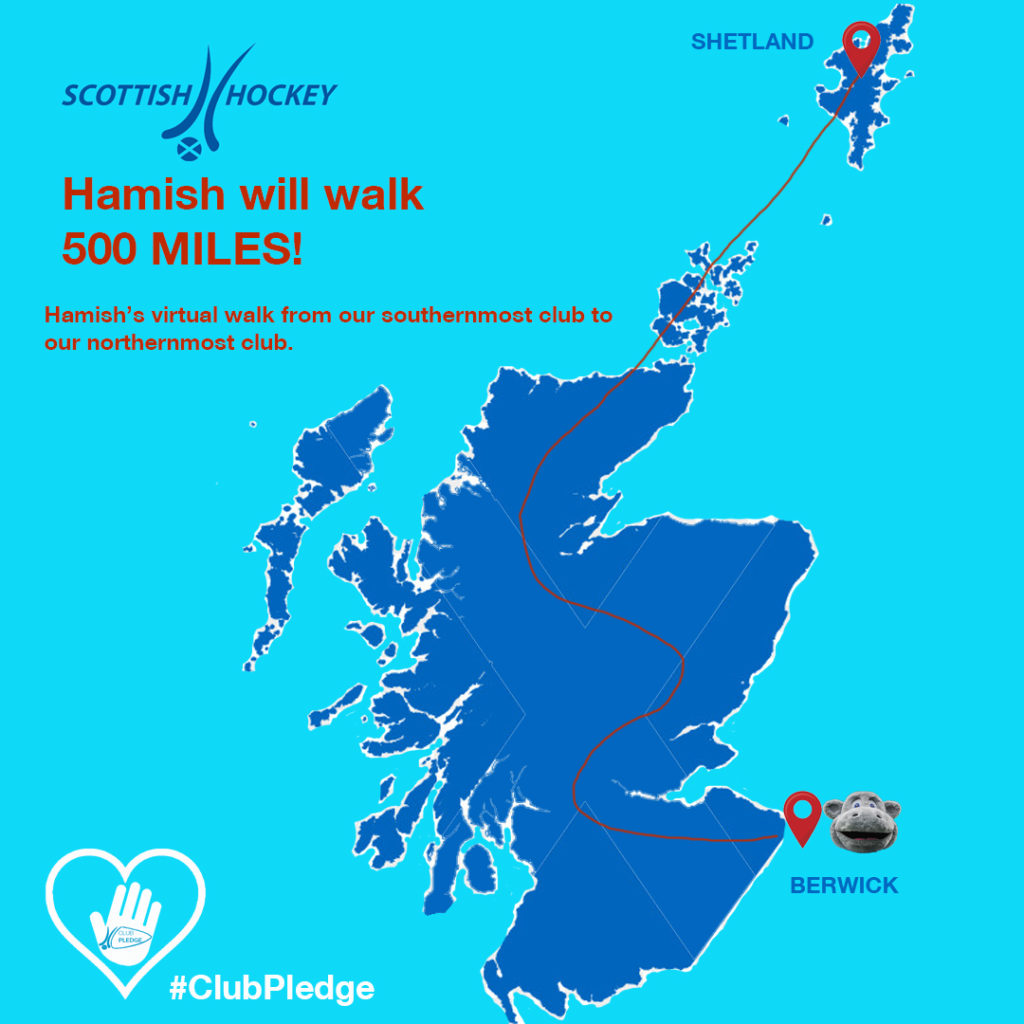 Hockey clubs across Scotland have been playing a vital role in supporting their members, as well as the wider community, during Club Pledge. Here’s a snapshot of some of the fantastic and inspirational Club Pledge activity taking place in the Borders.

Fjordhus Reivers did a ‘Run a mile with a Smile’ challenge and raised £770 for the local food bank. Club member Janet Jack has also been in the local papers for sharing online exercise videos within the community, which have been seen far and wide on social media.

Berwick HC did their fancy dress 5K challenge and they were raising money for Berwick and District Friends of Dementia. Players wore all types of  different costumes such as dressing as a minion for the challenge.

Hockey clubs across Scotland have been playing a vital role in supporting their members, as well as the wider community, during Club Pledge. Here’s a snapshot of some of the fantastic and inspirational Club Pledge activity taking place in the West.

As part of Club Pledge Uddingston launched its #UddyBuddy system for members, parents and partners. The Uddy Buddy system is where members email the secretary and she allocates them a buddy. Each week the buddies must phone each other to check in, have a chat, and ensure they have all the supplies needed for that week. Additionally, the club has assisted the community in collecting donations for a local food initiative and each week delivers the food parcels. On Easter Sunday the club delivered over 500 Easter eggs to vulnerable children in the community.

GHK organises a fortnightly (Friday nights), Zoom “E-Pub Quiz”, open to all hockey club members. They also participate in socials with GHK Rugby Club; and a joint e-quiz is planned later this month. As a club it has raised £515 and 120 meals worth of food bank donations to the Glasgow Northwest Food Bank at the end of March. The club’s intention is to repeat this drive at the end of May/beginning of June, with donations to another local charity and another food bank drive. It has also participated in GHK Rugby charity challenges, including the #TwoPointSixChallenge to perform 26 burpees and donate money to the Hearts and Balls Foundation (helping players and families who have been impacted by sports-related injuries/accidents including spinal injuries). The club has numerous members across four senior teams who are key workers, including: nurses, doctors, teachers, food supply chain workers, farmers, carers etc. Whilst GHK has not profiled these club members yet, it will do so on social media channels pending their permission. Finally the club will be hosting virtual awards night on 6th June.

After making the Club Pledge, Loch Lomond launched its 100 miles in May challenge. The club’s members smashed the challenge in one week – running 107 miles, walking 195 miles and cycling 103 miles – Loch Lomond Superheroes. 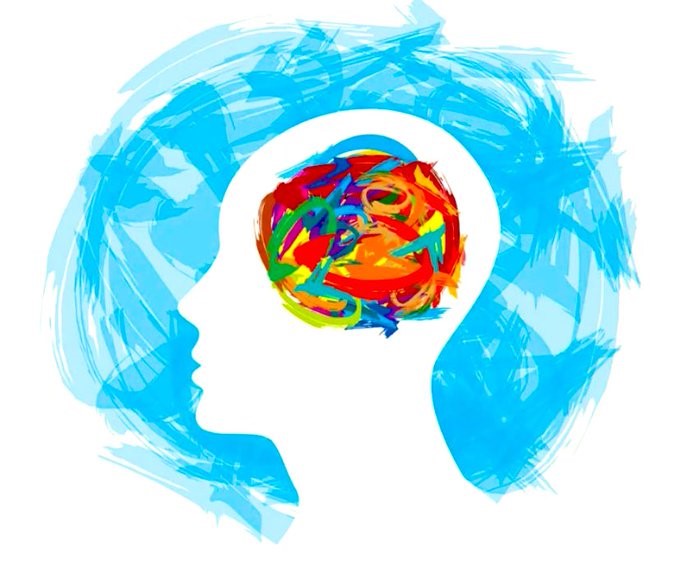 Troon HC decided to make going for a walk around and about the town a little bit more exciting by setting up a “Rock Trail”. The Rock Trail is to engage the club’s junior members and families while out for a walk – the members add a new rock and move a rock to a new place on the route.  A route map was circulated to club members’ parents, and also posted on social media.

The trail starts off with “75 fairy dropped rocks”. The members have a route map linking up where the rocks are and also the gaps where the additional rocks will fill the trail.  When a junior member adds a rock they post a pic on the Troon HC Rock Trail WhatsApp page, which the club also puts on social media.

Giffnock and Rottenrow Bluesox have also done some terrific Club Pledge activities, find out more about them here: Giffnock and Bluesox

Hockey clubs across Scotland have been playing a vital role in supporting their members, as well as the wider community, during Club Pledge. Here’s a snapshot of some of the fantastic and inspirational Club Pledge activity taking place in the East.

Gullane Youth Hockey Club has been hosting a weekly fun quiz, Pictionary, and fitness classes all on Zoom, which lets the club build team bonding in the U10s, 12s, 14s and 16s, as each age group has its own session. Weekly skills challenges. All this on the Facebook page but it is private.

The club also hosted a lockdown ‘bake off’ challenge, which has seen members enter with some fabulous hockey inspired cakes.

Gullane has now also started a collection for the club’s local food bank as it looks to support the wider community.

Haddington Youth Hockey Club set off on a virtual walk from their club in Haddington, the first stop was in Holland, before reaching Belgium and Germany en route to Italy then Spain and finally France. 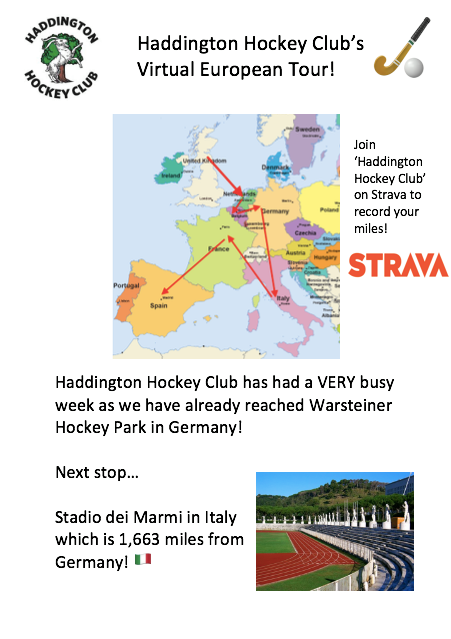 Inverleith has led on several Club Pledge activities such as its Purple Heroes campaign, which praises the work of healthcare professionals.

They also supported the food banks in the early phase of Covid and delivered care packages as profiled HERE.

ESM have been supporting a food bank. The club has been selling club buffs (face coverings) for a £5 donation. The club has also set a ‘guess the coach’ competition while some running other individual fundraising and squad challenges.

Grange members have been running various distances as part of the ongoing charity “Quarantine Cup” along with regular fitness sessions.

Watsonians members shaved their heads to raise money for good causes and also gave free hockey balls to their youth members. The club has been promoting ‘hockey at home’ during the pandemic.

Dundee Uni Women embarked on a phenomenal changing lives activity. As part of Club Pledge to, Dundee Women’s Hockey Club is raising money for WRASAC by running/walking/cycling the distance to our hockey tour destination; Prague. The club aims to raise £1277, which is the number of miles its members plan to travel. Each of the 4 teams has approximately 319 miles to face over the course of 2 weeks. Members are recording through Strava and will be position updates on social media. Any donation is appreciated no matter how big or small. 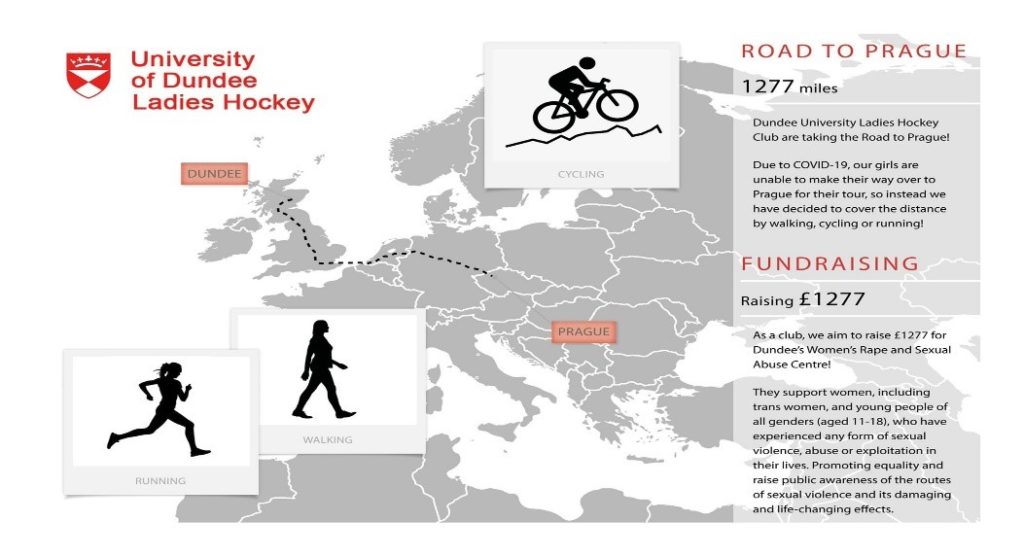 Dunfermline Carnegie went down memory lane for Club Pledge. 100 years ago this month the club after discussion with the Carnegie Dunfermline Trust was offered a ‘permanent’ home pitch at Venturefair (now site of Canmore Golf Club). A move to the Trust’s new Pitreavie Playing Fields took place in 1935 with the club remaining there & having use of four grass pitches until 1991 when club legend Bill (Come on the Reds) Ruzzak captained the 5th XI in the club’s last home game on grass. Photo is of the club membership in 1960 taken in front of the Pitreavie Pavilion – how many can you recognise? 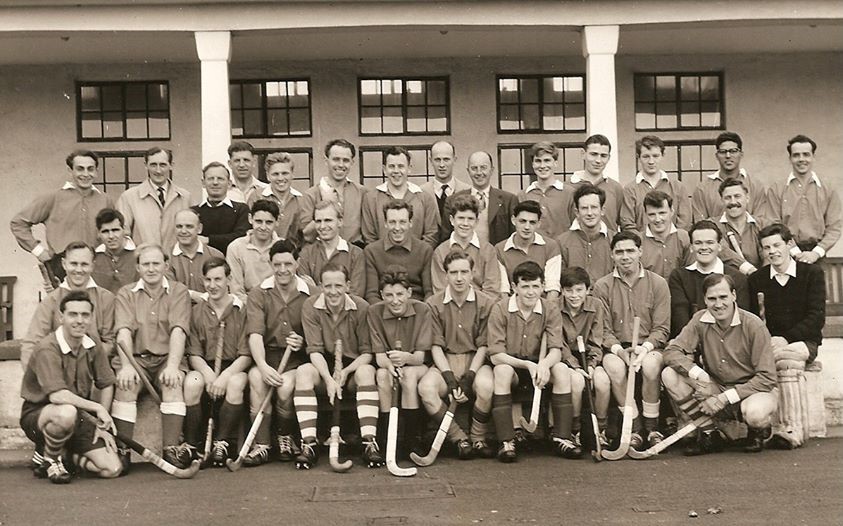 Dunfermline Ladies HC was founded on Wednesday 3rd November 1920 with games played in a field at Brucefield Farm with a hut for changing purchased in 1922. The photo shows the wear & kit c1920. The club moved to McKane Park in 1925 staying until 1965 when they moved to Pitreavie Playing Fields merging with Dunfermline Carnegie in May 1999. There will be a Centenary Dinner at Forresters this November. 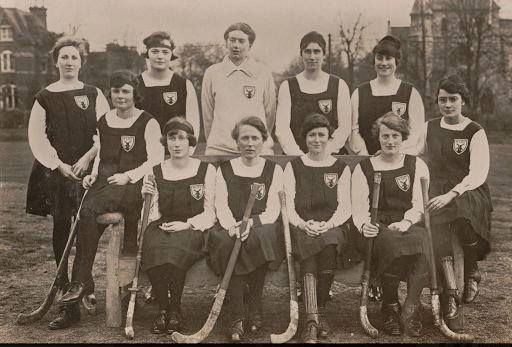 Grove Menzieshill has been sharing some skills training from Jamie and Cammie Golden through video content on Instagram.

A brilliant charity quiz was hosted by Kinross Hockey Club while Perthshire has been providing its members lockdown entertainment through lots of videos of family and U16/U18 doing various challenges. Also running lots of spot the difference with club photos.

The University of St Andrews Hockey Club are aiming to run 4000km in the month of May whilst raising £4000 for its elected club charity SAMH.

The club says in times like these it is so important to protect mental wellbeing and think of how we can support other in this difficult time. SAMH is a great charity in which the USTAHC works to support and all proceeds will be going to them.

Saints hockey has been taking part in the #runforheroes challenge over the past few weeks, hitting some impressive 5km times whilst supporting our health services with a £5 donation.

Hockey clubs across Scotland have been playing a vital role in supporting their members, as well as the wider community, during Club Pledge. Here’s a snapshot of some of the fantastic and inspirational Club Pledge activity taking place in the North.

In North District, there is plenty of activity going on in terms of Club Pledge. Keeping in touch with members has been integral to this, with many of the clubs holding online quizzes and regular catch ups to keep connected with members.  The toilet roll challenge has been popular, with Shetland even combining their efforts with other clubs across Scotland.  Shetland and Ellon have also used lockdown as an opportunity to profile current or ex-players online, or share memories of teams from past seasons.

Clubs have also been very keen to highlight the work of key workers, with Gordonians posting an article on their website thanking members who are working on the front line.

For those looking to keep their skills sharp, Quasar has issued a weekly skills challenge to allow members to practice their skills indoors, (even going that extra mile detailing how to make marker cones from paper). Bon Accord MBC has also been posting skills challenge videos for members to try out, whilst Aberdeen has started a fitness challenge using letters of the alphabet. 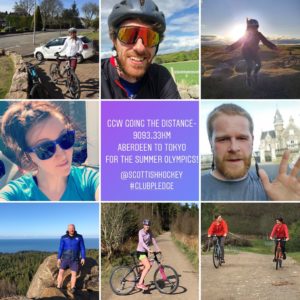 Highland, Gordonians, RGU and Granite City Wanderers have all set group activity targets based on distance travelled to games & venues to help members keep fit, and have smashed their targets whilst raising money for a variety of local charities.

Aberdeenshire South & Aberdeen Uni Ladies have been encouraging members to sign up for the run 5k, donate £5, nominate 5 challenge, while Ellon has used the water bucket challenge to encourage donations, and even had one brave member be prepared to be soaked by water falling from two large tractor scoops – that’s amazing dedication to raising money for charity! 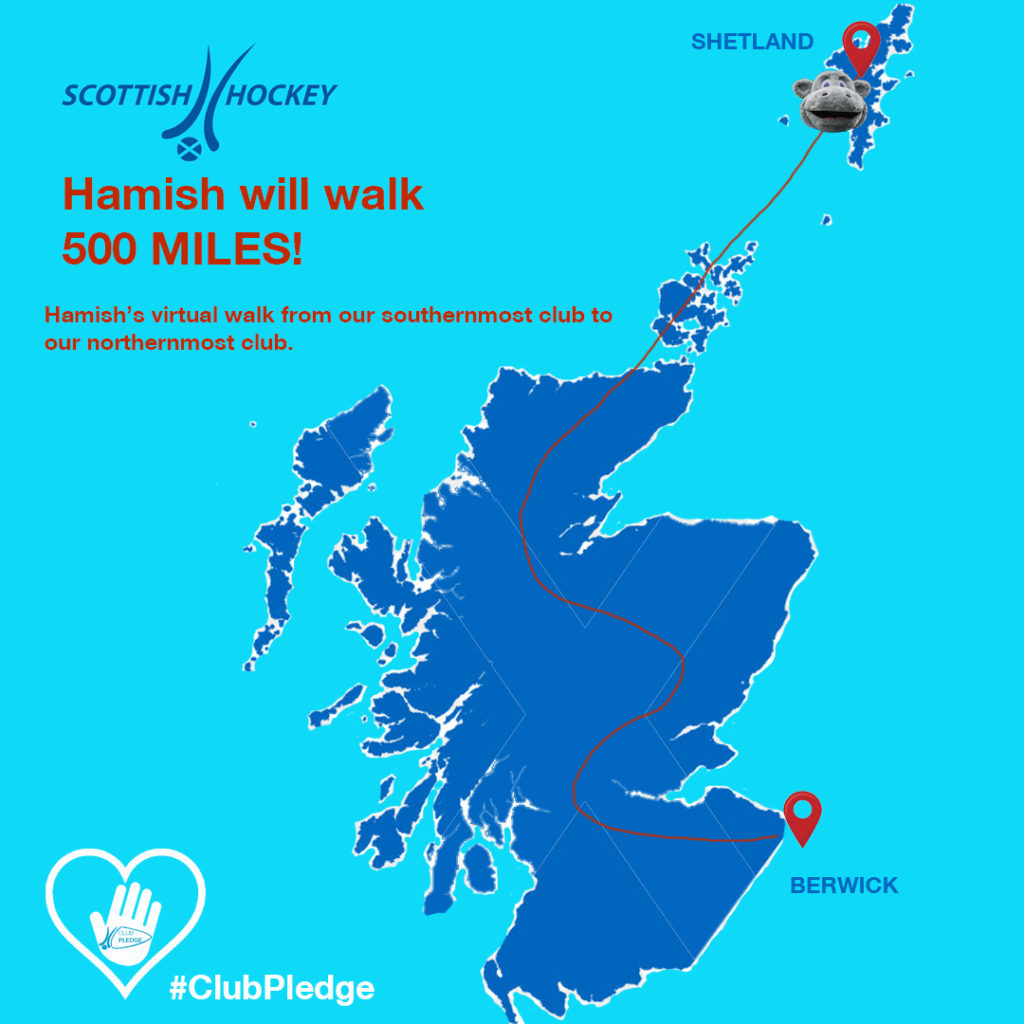 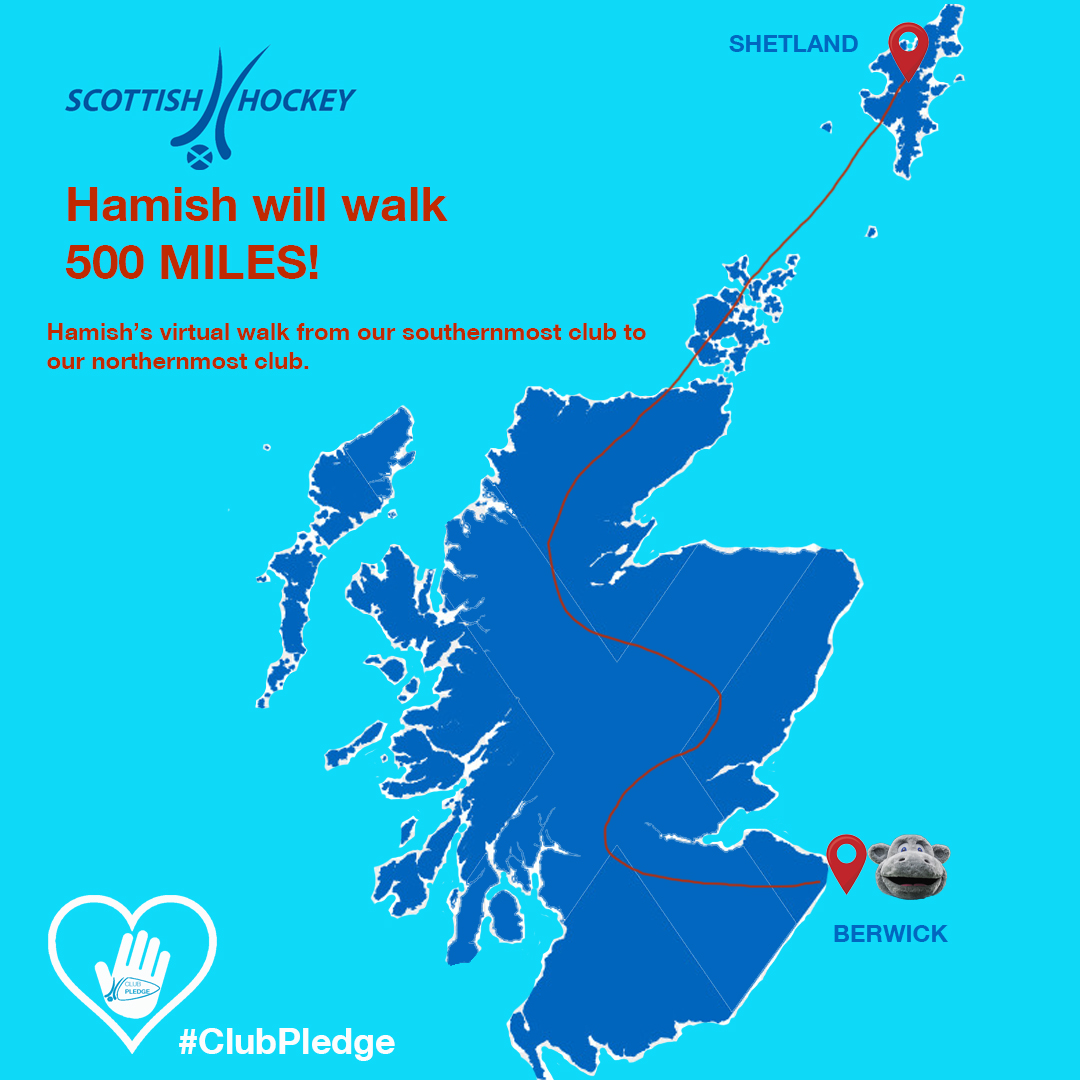